Where does YOUR state rank in terms of life expectancy?

People in some southern states can expect to die eight years younger than the average American, according to data that lays bare huge disparities in US life expectancy.

Research by the online pharmacy NiceRx found that, while Americans lived for 79 years on average in 2020, those in Mississippi can expect to reach just 71.

For comparison, people in Hawaii — which has the highest life expectancy — live to 80 on average. More up-to-date figures indicate America’s life expectancy has tanked to its lowest level since 1996 — fueled by a ferocious rise in fentanyl addiction.

The second worst state for life expectancy was West Virginia, where people lived 72 years and 10 months on average.

At the other end of the scale was Washington (79 years and two months), Minnesota (79 years and a month), and California, Massachusetts and New Hampshire (79 years).

Lower life expectancy in poorer states has been blamed on worse healthcare systems and more residents without health insurance.

However, these states also have higher rates of chronic diseases — such as obesity — raising the risk of a myriad of other conditions such as heart disease and high blood pressure later in life. 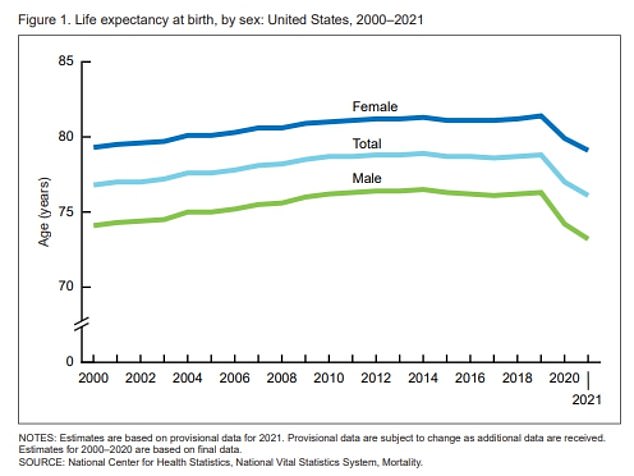 The above graph shows life expectancy in the US by year, according to the Centers for Disease Control and Prevention. Rates plateaued in the mid-2010s but dropped off after the Covid pandemic – which led to many people dying prematurely. Experts say the surging opioid epidemic is also to blame for the fall 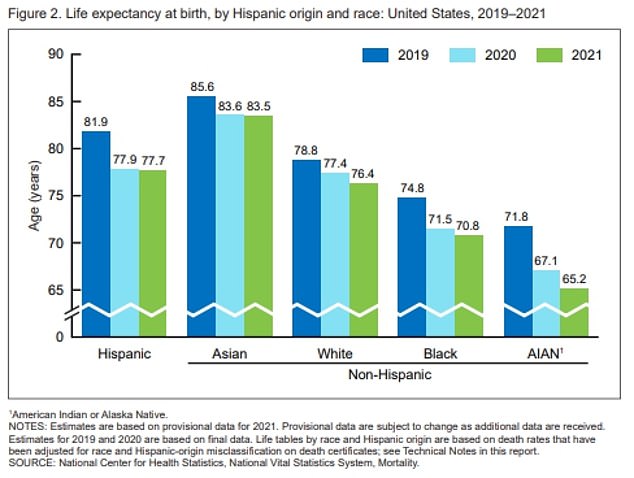 This graph shows the life expectancy of different ethnic groups by year. All groups have seen a decline, data shows

America’s life expectancy was 79 years and a month in 2020, according to data from the National Vital Statistics System used in the report.

This marked the second year on record that it had declined, and an almost two-year downturn from 2019.

Every single state registered a decline in life expectancy between 2019 and 2020.

The Covid pandemic was blamed by most experts for the downturn, with the virus leading many to die earlier than they otherwise would have.

But some experts have also blamed the surging opioid epidemic, with deaths now hitting record levels.

Some even said that if it were not for advances in treating chronic lung disease, influenza and Alzheimer’s — top killers in the US — then the drop in life expectancy could have been even greater.

Dr Robert Shmerling, a clinical chief at Harvard Medical School, wrote last year: ‘It’s striking — and disappointing — that after decades of increasing life expectancy, and at a time when researchers are rethinking aging and the limits of lifespan, we are now seeing life expectancy fall.

‘This downward trend could be reversed if we make progress in controlling the Covid pandemic and opioid epidemic.’

Asked how to improve life expectancy in poorer states, he said: ‘We can all vow to exercise more, choose a healthier diet, and work harder to be healthy as best we can.

He added: ‘It’s notable that some of the states with the lowest life expectancies are also the ones with the most uninsured residents and, yet, have turned down Medicaid expansion.’

Life expectancy is how long a person is expected to live from birth on average.

They are calculated assuming that when most people in older generations die is when people in the current youngest generation will also die.

The Traitors US to be shown in full on BBC iPlayer, One and Three