Home Health news What is a mini-stroke? Hailey Bieber suffered one at 25
Health newsRecent Post

What is a mini-stroke? Hailey Bieber suffered one at 25

Supermodel Hailey Bieber, 26, has opened up about the emotional trauma she endured last year after suffering a ‘mini-stroke’ in her 20s.

A transient ischemic attack (TIA) is caused by a temporary blockage in blood flow to the brain but differs from a full-blown stroke in that its frightening effects are short-lived.

Typically these strokes last a few minutes and do not usually leave behind permanent damage – but in Ms Bieber’s case, the fear of it happening again stuck with her. 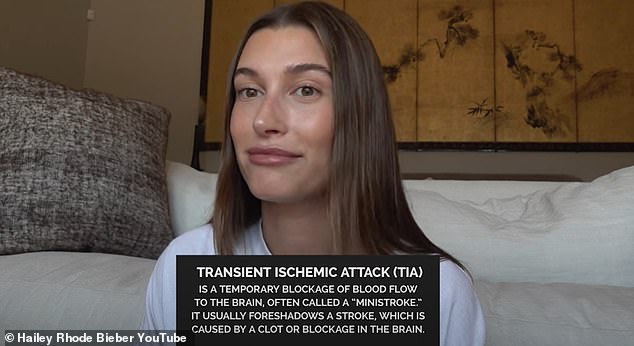 The hospital where Ms Bieber was sent after experiencing a sensation of numbness in her arm and fingers confirmed that she suffered a Transient Ischemic Attack (TIA), more commonly referred to as a mini-stroke 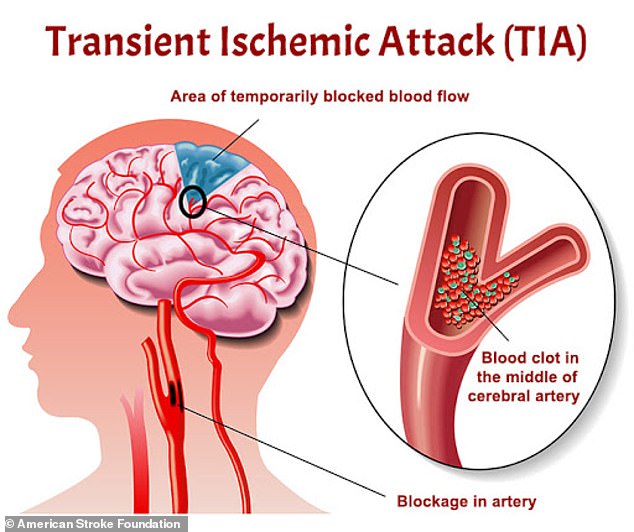 A mini stroke, known medically as a transient ischemic attack, occurs when blockage occurs in a person’s cerebral artery and denies blood to the brain. It presents the same symptoms as a regular stroke, but will resolve itself within 24 hours

A TIA presents with the same scary signs as a stroke: Weakness, numbness, or paralysis in the face, arm or leg, typically on one side of the body; slurred or garbled speech or difficulty understanding others; blindness in one or both eyes or double vision; and vertigo or loss of balance or coordination.

Ms Bieber, who was quick to call for a medic when she suffered one last year, said her symptoms abated relatively soon after she first started experiencing numbness in her arm and fingers.

She said on the podcast The Run-Through with Vogue last week: ‘I struggled with a lot of anxiety after.

‘I struggled with a little bit of PTSD, just like the fear that maybe it would happen again.

‘It was so terrifying, so jarring, so discombobulating in every single way that you could imagine.’

The risk of stroke greatly increases with age.

Neurologists consider TIAs to be warnings for a bigger, more devastating stroke to come, according to the American Stroke Association.

One in three people who suffer a TIA will endure a stroke after, with about half occurring within a year after the TIA.

Unlike a regular stroke, those who suffer a TIA experience temporary symptoms that resolve in up to 24 hours – though sometimes in only minutes.

One in seven strokes occur in people aged 15 to 49 years old, according to the Centers for Disease Control and Prevention.

A 2013 report published in the journal JAMA Neurology found that 10 per cent to 14 per cent of ischemic strokes, including transient ones, occur in adults ages 18 to 45 years.

The chance of having a stroke nearly doubles every 10 years after age 55, per the Centers for Disease Control and Prevention.

Meanwhile, about one in seven strokes occur in adolescents and young adults ages 15 to 49.

A mini stroke can be brought on for different reasons.

For instance, a build-up of fatty deposits in the blood vessels around your body can cause a clot that leads to stroke, a process known as atherosclerosis. 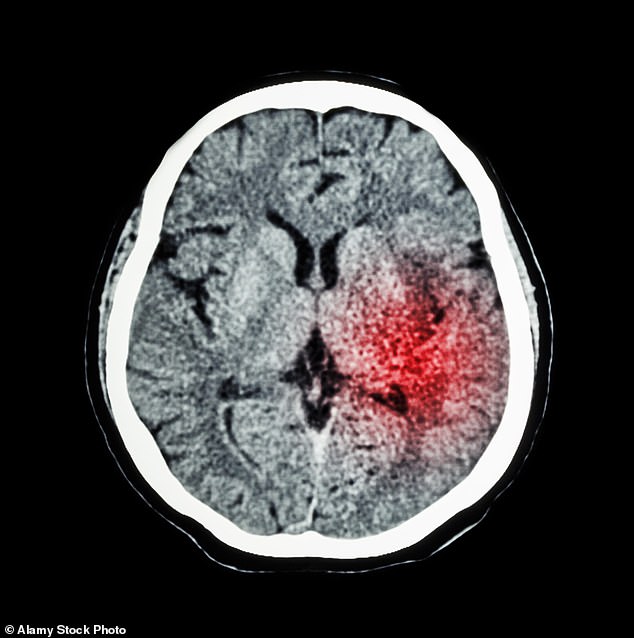 A transient ischemic attack, commonly known as a mini-stroke, is caused by a temporary blockage of blood flow to the brain

Another type of clot that could result in a stroke is linked to heart conditions such as atrial fibrillation, a type of irregular heartbeat. AFib can cause a clot in the heart that then travels to the brain.

The risk of a severe stroke is highest in the days and weeks immediately following the transient attack, so it is crucial that the patient gets to the bottom of what caused their TIA as soon as possible to mitigate future risk.

The exact cause of Ms Bieber’s mini-stroke is murky, though she said doctors pointed to her recent Covid diagnosis combined with two transatlantic flights within a short window of time and having just been prescribed birth control pills as causes for the underlying blood clot.

Estrogen in birth control pills has been known to cause blood clots that can lead to stroke.

Women who take oral contraceptives are twice as likely to suffer from a stroke than their counterparts who do not take them, though that population size is already so small that a doubled risk does not mean the risk is high, especially among women without other risk factors such as an addiction to cigarette smoking and a history of hypertension.

Survivorship of a mini-stroke, especially among younger people, is high. Though suffering a TIA appears to have negative effects on a person’s longevity overall.

A 2011 report in Stroke: Journal of the American Heart Association found that suffering from a TIA can lower life expectancy by 20 per cent. TIA had only minimal effect on patients younger than 50, but significantly reduced life expectancy in those older than 65.