Oxford University researchers found smokers using electronic cigarettes are up to twice as likely to give up the habit for six months.

Cancer experts welcomed the report, which adds to the growing pile of evidence that shows e-cigarettes are effective quit-smoking tools.

But they warned non-smokers not to take up vaping because ‘they are a relatively new product and we don’t yet know the long-term health effects’.

Author Dr Nicola Lindson, a psychologist at the university, said the products carry only a small fraction of the risk of smoking but aren’t ‘risk free’. 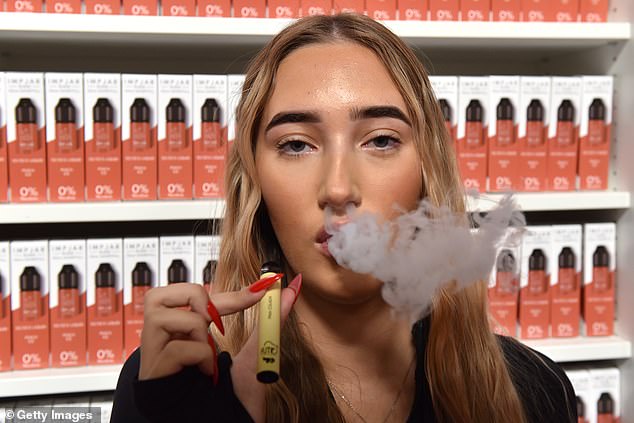 EVERYTHING YOU NEED TO KNOW ABOUT VAPING

E-cigarettes are devices that allow you to inhale nicotine in a vapour rather than smoke.

They do not burn tobacco or produce tar or carbon monoxide — two of the most harmful parts of tobacco smoke.

The devices work by heating liquid that contains nicotine and flavourings.

They can come as vape pens — which are shaped like a pen or small tube with a tank to store e-liquid and batteries — or pod systems that are rechargeable and often shaped like USB sticks.

E-cigarettes are not risk-free but are believed to cause less harm than smoking.

However, its liquid and vapour contain harmful chemicals that are also found in traditional cigarettes, but it much lower levels.

These chemicals have been linked to lung inflammation, chronic coughs, shortness of breath and lung disease.

There have also been cases of e-cigarettes exploding or catching fire.

Can children buy them?

A law came into force in 2011 which made it illegal to sell e-cigarettes to under-18s in the UK.

However, there has been reports of children buying them directly from shops.

What action do experts want?

Campaigners have called for more funding to enforce the laws against underage sales, action on child-friendly packaging and labelling, as well as promotion on social media.

And a Government-commissioned review published in June recommended a review of vape flavours to ensure they don’t appeal to young people.

The paper, by former children’s charity chief Javed Khan, also recommended that cartoons and images on vaping products be banned.

Have other countries already taken action?

The US Food and Drug Administration banned all products sold by e-cigarette company Juul in June.

It found that there was not enough evidence to confirm its products did not harm public health.

However, the FDA then paused its decision in July while it carries out an additional review on the company’s products.

The US regulator had already banned fruity flavours of e-cigarettes.

Currently, the NHS advises that vaping can help smokers – though it is not available on prescription.

But England is set to become the first country in the world to prescribe e-cigarettes to help smokers quit, if Government plans are given the go ahead.

Around 5 per cent of US adults vape.

Recent surges in prevalence have largely been driven by young people taking up electronic cigarettes, prompting concern from some experts.

Despite the concerns around child use, Dr Lindson said: ‘E-cigarettes do not burn tobacco; and as such they do not expose users to the same complex mix of chemicals that cause diseases in people smoking conventional cigarettes.

‘E-cigarettes are not risk free, and shouldn’t be used by people who don’t smoke or aren’t at risk of smoking.

‘However, evidence shows that nicotine e-cigarettes carry only a small fraction of the risk of smoking.’

They looked at data of smokers who were trying to quit and compared their success with e-cigarettes and other therapies over six months.

These included nicotine replacement therapy, such as patches and gums, varenicline — a medicine to help people stop smoking — and both nicotine and non-nicotine e-cigarettes.

Some studies also compared these success rates to having no support to quit.

Researchers also looked at studies investigating side-effects of the therapies on or after at least one week of use.

This means an additional two to six people in 100 could potentially quit smoking with nicotine containing electronic cigarettes.

Evidence also suggested that nicotine e-cigarettes led to higher quit rates than e-cigarettes without nicotine, or no stop smoking intervention, but less data contributed to these analyses.

Lead author Dr Jamie Hartmann-Boyce said: ‘Electronic cigarettes have generated a lot of misunderstanding in both the public health community and the popular press since their introduction over a decade ago.

‘For the first time, this has given us high-certainty evidence that e-cigarettes are even more effective at helping people to quit smoking than traditional nicotine replacement therapies, like patches or gums.’

Nicotine e-cigarettes cased throat or mouth irritation, headache, cough, and feeling nauseous in users for up to the first two years.

However, these effects appeared to diminish over time.

Michelle Mitchell, chief executive at Cancer Research UK, said: ‘We welcome this report which adds to a growing body of evidence showing that e-cigarettes are an effective smoking cessation tool.

‘We strongly discourage those who have never smoked from using e-cigarettes, especially young people.’

‘This is because they are a relatively new product and we don’t yet know the long term health effects.’

She added: ‘While the long term effects of vaping are still unknown, the harmful effects of smoking are indisputable – smoking causes around 55,000 cancer deaths in the UK every year.

‘Cancer Research UK supports balanced evidence-based regulation on e-cigarettes from UK governments which maximises their potential to help people stop smoking, whilst minimising the risk of uptake among others.’

The researchers conclude that more evidence, particularly about the effects of newer e-cigarettes with better nicotine delivery than earlier ones, is needed to assist more people quit smoking.

Independent experts said the results should ‘provide reassurance to smokers’ e-cigarettes could help them quit.

Dr Sarah Jackson, principal research fellow of the University College London Tobacco and Alcohol Research Group, said: ‘E-cigarettes are popular among smokers who want to quit, with one in every three quit attempts in England involving an e-cigarette.

‘A growing number of trials have tested whether e-cigarettes make smokers more likely to quit successfully. This review provides the most rigorous and up-to-date summary of this evidence.

‘With more data available than ever before, the authors concluded that there is now high-certainty evidence that e-cigarettes are even more effective in helping people to quit than traditional nicotine replacement therapies, such as nicotine patches and gum.

‘These findings follow a recent review of the harms of e-cigarettes, which showed clear evidence that vaping poses only a small fraction of the health risks of smoking.

‘Taken together, these reports should provide reassurance to smokers that e-cigarettes are much safer to use and can increase your chances of quitting.’