An unfortunate Chinese man developed a 2inch-long horn on the tip of his penis, doctors have revealed.

The unidentified 43-year-old sought medical advice after sprouting the ‘hard’ and ‘yellowish-brown’ growth.

Doctors had already chopped off a similar mass three years earlier, when it was the size of a grain of rice.

But it had since regrown, reaching 5.5cm by 3cm in size.

Surgeons in Taiyuan, north east China, successfully chopped off the horn — which was cancerous — and the patient fully recovered.

Medics do not know what causes the condition, which has only been reported six times in the last three decades. 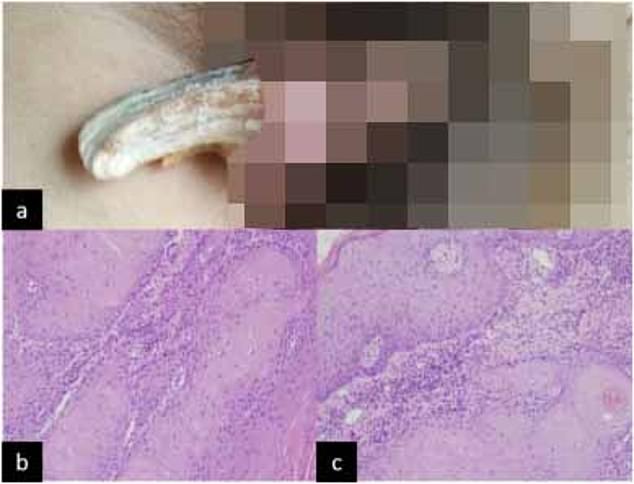 The unidentified 43-year-old sought advice from urologists in Taiyuan, north east China, three years after it initially appeared. Despite the ‘hard’, ‘yellowish-brown’ growth starting off as small as a grain of rice, it grew 5.5cm by 3cm (2 inch by 1 inch) before doctors intervened (pictured, top). Analysis of the tissue showed that the man had squamous cell carcinoma — the second most common form of skin cancer (pictured, bottom)

WHAT ARE PENILE HORNS?

Doctors are baffeled over what causes the condition.

However, they note that injuries to the penis and a tight or excess foreskin are risk factors, as are poor hygiene and STIs.

Just five cases of penile horns have been reported in medical literature since 1990, according to doctors in China who treated a patient with the condition.

They said the horn usually develops within one year of being circumcised, leading them to suggest that the operation may trigger the growth.

The horns may be cancerous and should be removed surgically, medics say.

Urologists at The Second Hospital of Shanxi Medical University diagnosed him with a cutaneous horn — a hard cone-shaped lump which protrudes from the skin.

The build-up is made from keratin — the protein which forms hair, nails and the outer layer of skin.

The condition is often likened to that of an animal horn because the growth is usually spotted on the head and face.

However, doctors have also reported horns appearing on the chest, neck, shoulders and penis.

Describing the case in the Asian Journal of Surgery, doctors stated the patient first noticed the horn when it was around the size of a grain of rice three years earlier.

It was removed by surgeons at the time.

But over the following 36 months, it grew back bigger and became more painful the larger it got.

The horn was ‘yellow-ish brown’ and ‘hard in consistency’, extending from just under the foreskin and past the urethra, according to doctors.

It was smooth at the top and rough at the base, ‘where there were several mass-like protrusions’, they said.

The horn was sliced off by surgeons for a second time, who also removed 1.5cm of penile tissue around its base.

Analysis of the tissue showed the man had squamous cell carcinoma — the second most common form of skin cancer.

The cancer, which is spotted in around 50,000 Britons and 3.3million Americans annually, can appear as raised growths from the skin, scaly red patches, open sores or thickened wart-like skin.

The patient fully recovered, with the procedure successfully clearing him of the horn and cancer.

His medical team noted that he had no history of sexually transmitted infections and was not taking any medication.

Just five cases of penile cutaneous horns has previously been reported in medical literature since 1990, according to the doctors who are baffled about what causes it.

The new report brings the total to six, with three being spotted in China and one in each of India, Spain and the US.

The doctors noted that having tight or excess foreskin are risk factors, as are penile injuries, poor hygiene and STIs.

Penile horns usually develop within one year of being circumcised, leading the urologists to suggest that the operation may trigger the growth.

It is unclear whether the 43-year-old underwent the procedure shortly before the horn appeared.

They warned that the horns may be cancerous and should be removed surgically.

In a previous case, a 60-year-old man in India developed an inch-long horn no his penis following an operation to repair his urethra.

Surgeons had to remove the growth, which was not cancerous, twice before it was banished for good.