Describing Barry Island as the home of Gavin and Stacey he took the opportunity to snap a picture by Marco’s Cafe which features photos of cast members from the sitcom.

During his visit to Barry Island, Mr Mallet said:

“I’m just thrilled to be here. It is such a magical place.”

He also praised James Corden, who co-wrote and starred in Gavin and Stacey, adding: “You wrote a brilliant, brilliant show – I love it!”

Mr Mallett met owner of Marco’s Cafe, Marco Zeraschi, for a chat and a sandwich before setting off through Porthkerry Country Park. 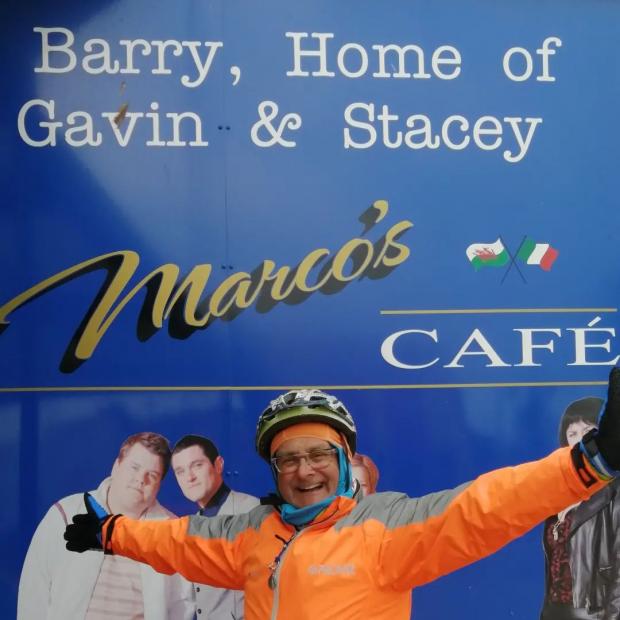 He described the spring blossom as “delightful” and Barry’s viaduct as “majestic”.

Why is Timmy Mallet in south Wales?

Timmy Mallett is adventuring with a 4,000 mile bike ride around the coast of Britain.

Along his travels he is painting scenes of the places he visits, including Penarth Beach.

Penarth beach near Cardiff.
Painted over 100 years ago by English impressionist Alfred Sisley and hanging in national gallery of Wales.
It inspired me to go in search of his viewpoint and paint my version of this iconic scene.#TheCyclingArtist #roundbritain @DalerRowney pic.twitter.com/sAQiwOWqu2

St illtud #llantwitmajor the cathedral in the Vale, is a great discovery on my adventure #roundbritain

Its a special place for a brother Martin Mallett moment.

The celebrity has also recently travelled to Wick, Porthcawl, and Port Talbot.

Ahead of his arrival in Barry he’d visited Chepstow Castle in Monmouthshire and the Transporter Bridge in Newport.

'I felt more joy than I thought possible'