Taking Xanax during pregnancy does NOT raise risk of autism in babies, major study rules

Taking Xanax during pregnancy does not raise a baby’s risk of autism, a major study has ruled.

Anxiety drug prescriptions and childhood autism rates have increased in recent years, and previous studies suggested the two might be linked.

Researchers analyzed medical records of nearly 1.5million mothers and their children, who were up to 14 years old and born in Taiwan between 2004 and 2017.

After adjusting for other risk factors, like genetic history of neurodevelopmental disorders, there was ‘no evidence’ that anxiety medication correlated to a higher risk of autism in children.

Dr Vincent Chen, an epidemiologist who led the research, said: ‘Our results challenge current assumptions of a potential association of neurodevelopmental disorders with maternal benzodiazepine use before or during pregnancy.’

The Centers for Disease Control and Prevention (CDC) says women should be aware of the risks of taking benzodiazepines, including sedation, low muscle tone, and labored breathing. But the link to autism was never fully established. 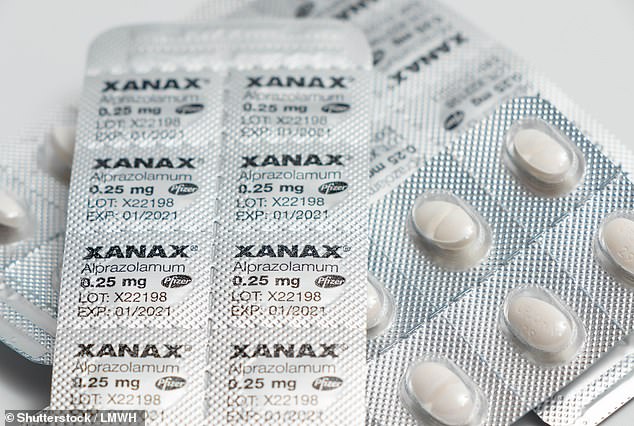 Xanax does not raise a child’s risk of autism, a landmark study has ruled (stock pic

Autism spectrum disorder refers to a broad range of conditions where children struggle to interact with their peers and may repeat behaviors.

It begins in early childhood, although some cases may not be diagnosed until children are in their teens or early adulthood.

About 5million people in the US are thought to have the condition.

Experts warn anxiety pills could become the next opioid crisis

Experts today warned the US risks creating an opioid-like crisis with anxiety pills if it decides to screen everyone under the age of 65 for the condition.

The US Preventative Services Task Force, one of the most influential bodies in US health care, recommended last month that the roughly 200million Americans aged 18 and above are checked – even if they don’t have any symptoms.

It would make clinical help for anxiety more accessible and force patients to jump through less hoops to get help, the doctors claim.

But experts told DailyMail.com it could spur a surge in prescriptions for anti-anxiety medication – which are already feared to be at the center of a budding addiction crisis in the US.

The most common anxiety medications fall into the class of benzodiazepines, with fast acting drugs like Xanax, Klomopin, Valium and Ativan being among the group.

Dr Anna Lembke, chief of the Addiction Medicine Dual Diagnosis Clinic at Stanford University, told this website she feared the new guidance had echoes of the opioid epidemic.

Dr Jonathan Shedler, a psychiatry professor at the University of California, San Francisco, told Fox News that following the recommendation would be ‘terrible’.

Researchers at the Chiayi Chang Guny Memorial Hospital in Chiayi, south-western Taiwain, investigated the link between autism and benzodiazepine use in pregnancy.

Benzodiazepines – which include Xanax – are a class of psychoactive drugs known for their depressant effect on the central nervous system.

They quickly diffuse through the blood–brain barrier to cause sedative effects.

They are used for those struggling with sleep, anxiety, spasticity due to CNS pathology, muscle relaxation, and epilepsy. One of the debilitating side effects is their addictive potential

Medical records of 1.13million mothers were extracted, who had given birth to 1.5million children.

Mothers’ medical records were examined for those who were prescribed benzodiazepines during pregnant.

Children’s records were also accessed to show which had been diagnosed with autism.

Initially, the analysis showed a slightly higher risk of autism among infants whose mothers took Xanax.

In the first trimester, they had a 13 per cent higher risk of developing autism, while in the second it was 10 per cent and the third 21 per cent.

But a sibling comparison was then carried out — comparing the risk of autism in infants born to the same mother.

This saw siblings with the same biological mother compared, controlling for factors including year of birth, gestational age, maternal smoking during pregnancy and other factors.

These results showed there was no significant difference in autism rates between the two groups.

The study also looked at rates of ADHD among children.

But after controlling for confounding factors there was no difference in autism prevalence between babies whose mothers took the drugs during pregnancy compared to those whose mothers did not.