A recent piece in The Texas Tribune lists seven alleged ways climate change is already impacting the state of Texas and its residents. When not outright false, the listed claims are extremely misleading.

This isn’t the first time Erin Douglas and The Texas Tribune have published false information about the impacts of climate change on Texas.

In that post, Climate Realism showed how her claims about hurricanes (point two in this latest piece), droughts (point five), and extreme weather, including the counterintuitive fourth claim that cold snaps will increase in Texas due to warming, were not supported by existing data.

Since Climate Realism dealt with those three specific claims already, and no new data has developed to undermine that article, this response will, with one exception, only address the new claims made in the latest Texas Tribune piece.

First, the article claims “Texas is getting hotter — even at night.” Measured average global temperatures have risen modestly over the past century of warming, but claims that it is a dangerous or unprecedented rise are unsubstantiated.

There is debate as to whether any temperature increase has occurred recently in the United States, as explained in a Climate Realism post here.

Indeed, as shown in the graphic below, data from the National Oceanic and Atmospheric Administration (NOAA) indicates Texas is part of the region of the United States where average temperatures have been at or below average for the past 30 years. 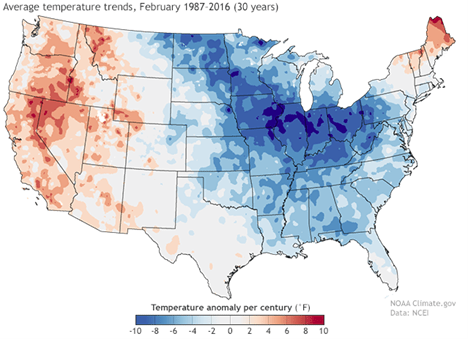 The Texas Tribune is right that to the extent warming has been measured in Texas it is at night with higher nighttime lows being recorded.

When temperature gauges are surrounded by concrete, next to buildings, or sited near artificial heat sources, the heat from the sunlight the surroundings absorb during the day is slowly released or radiated back at night.

One short point on claim two, “Hurricanes that hit the Texas coast are getting more powerful,” is that the proof the writers give for increasing hurricane power comes from studies that allegedly show “[c]limate change increased the intensity of Hurricane Harvey in 2017.”

The studies referenced all use computer simulations to try to attribute some percentage of the rainfall during hurricanes to climate change.

Attribution studies are prime examples of bad science, as discussed in detail in this Climate Realism post, where H. Sterling Burnett, Ph.D., explains how these simulations work and where they get their input data from.

“That general circulation climate models have serious failings is widely known. There is a significant debate concerning what factors influence global temperatures, as well as, for any particular factor, what direction and to what extent they influence temperatures. Those who have developed climate models admit they don’t understand the role that clouds or large scale ocean circulation patterns play in driving climate change, for example.”

In short, the best evidence suggests the kinds of attribution studies referenced by the Texas Tribune lack merit, because their findings are refuted by hard data.

Present sea-level rise is lower than experienced for most of the past 12,000 years since the Earth emerged from the most recent Ice Age, as discussed in Climate Realism here, here, and here.

There is no evidence that the rate of sea-level rise in Texas has increased during the period of modest warming.

Land subsidence, underground water withdrawals to slake the thirst of growing populations, and the draining of wetlands, which tend to buffer the coast from storms and tides, account for the few locations in Texas where sea levels appear to be rising at a faster rate than the global average.

Skipping ahead to the sixth point, “The risk of illnesses is growing,” the writers say that insect-borne illnesses like malaria, West Nile virus, and other mosquito-borne illnesses typically associated with the tropics, will become more common.

This is also false.

Climate at a Glance: Malaria and Mosquito-Borne Diseases, shows that according to World Health Organization data, the number of malaria deaths has decreased by half since the year 2000.

This has occurred alongside modest warming. Nor have there been any malaria deaths in North America since 1990.

Indeed, malaria was endemic in the United States through the 1950s, making thousands of people ill each year, until the country took public health measures to virtually wipe it out.

Also, as pointed out in this Climate Realism article here, there are a variety of other factors involved in the spread of mosquito-borne illness, such as the prevalence of standing water, bird migration, and concentration of human dwellings. Climate change is not a significant factor.

The final point in the piece, “Climate change is driving more migration,” is another common but false refrain. In the context of Texas, most of the migration discussed comes from South America and Mexico.

However, since extreme weather is not increasing in those countries, nor are crop yields suffering, there is little evidence to support the claim that climate change is responsible. Instead, other factors must again be considered.

At this point during the summer of 2021, the President of Guatemala chastised Vice-President Kamala Harris when she was visiting his country for claiming the United States’ growing illegal immigration problem was due to climate change.

That all of these claims can be debunked with readily available data is a testament to the frailty of the current narrative on climate change.

It’s a shame that so many journalists, including those at the Texas Tribune, are willing to ignore the facts, fearmongering about climate change for political reasons, when in reality the data reveals there is more to fear from fear itself than from climate change. Ask the Techspert: Basics of The Cloud