The key to preventing nightmares could be playing particular sounds into our ears through a wireless headband, a new study suggests.

In experiments, playing the sound of a piano during sleep reduced the risk of traumatic and fearful dreams for chronic nightmare sufferers.

Importantly, the piano sound had been linked with positive thoughts during the day when the patients were awake.

After receiving this new therapy, patients’ nightmares decreased significantly and their positive dreams increased over time. 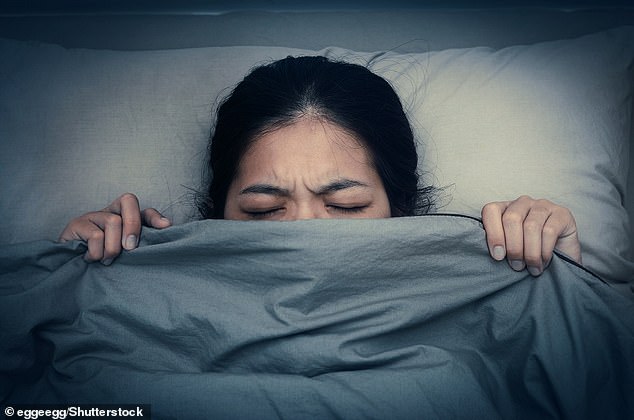 In therapy, dreamers may be coached to rehearse positive versions of their most frequent nightmares, but researchers in Switzerland take this a step further. They found that also playing a sound – one associated with a positive daytime experience – through a wireless headband during sleep may reduce nightmare frequency

After receiving this new therapy, the patients’ nightmares decreased significantly and their positive dreams increased (pictured)

The study has been led by experts at the University of Geneva and published today in the journal Current Biology.

The new technique to combat nightmares is an adaptation of an existing therapy called imagery rehearsal therapy (IRT).

IRT asks dreamers to change the negative storyline of a nightmare to a more positive ending – and rehearse this rewritten dream scenario during the day.

While IRT has shown some effectiveness, some patients do not respond to this treatment, so the team decided to adapt IRT using sound.

It involves creating an association between a positive version of a nightmare and a sound during an imagination exercise while awake.

Then, while asleep, this sound is played into the patient’s ears using a wireless headband.

‘There is a relationship between the types of emotions experienced in dreams and our emotional well-being,’ said study author Lampros Perogamvros at the Sleep Laboratory of the Geneva University Hospitals and the University of Geneva.

‘Based on this observation, we had the idea that we could help people by manipulating emotions in their dreams.

‘In this study, we show that we can reduce the number of emotionally very strong and very negative dreams in patients suffering from nightmares.’

Nightmares are considered ‘clinically significant’ when they occur frequently (more than one episode per week) and cause daytime fatigue, mood alteration and anxiety.

Prior studies have found that up to 4 per cent of adults experience nightmares at this clinically significant level.

One current form of therapy, known as imagery rehearsal therapy (IRT), coaches sufferers to rehearse positive versions of their most frequent nightmares.

IRT asks dreamers to change the negative storyline toward a more positive ending and rehearse the rewritten dream scenario during the day.

While IRT has shown some effectiveness, some patients do not respond to this treatment, so the team decided to adapt IRT.

To test whether sound exposure during sleep could boost success, Perogamvros and his colleagues gathered 36 patients, all receiving IRT. 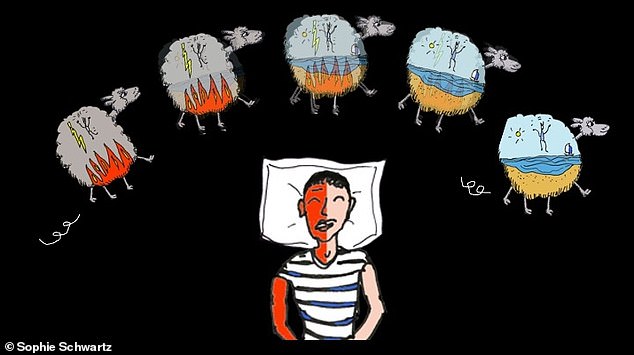 A team from Geneva has developed a promising new technique to help people experiencing nightmares. With this new therapy, the patients’ nightmares were significantly reduced and their positive dreams increased (artist’s impression)

IMAGES DURING NIGHTMARES VARY BY COUNTRY

Some nightmares might seem very common: being chased by an enemy, missing a train or sitting an exam without any preparation.

But night terrors not only differ from person to person – they might also vary from country to country.

Analysis of Google search data has shed light on the most unique nightmares around the world, which range from tornados, losing a limb and even going to work.

In the UK, bees are often a feature of more unique bad dreams, which could point to social anxiety or feeling out of place, experts say.

Half of the group received IRT as normal, while the other half were required to try out this new form of therapy, involving sound.

‘However, one of the two groups of patients did this exercise while a sound – a major piano chord – was played every 10 seconds.

‘The aim was for this sound to be associated with the imagined positive scenario.

‘In this way, when the sound was then played again but now during sleep, it was more likely to reactivate a positive memory in dreams.’

The people in this second group had to wear a headband that could send them the sound during REM sleep for two weeks.

REM is a kind of sleep that occurs at intervals during the night and is characterized by rapid eye movements – and it’s where nightmares mostly occur.

At the end of the experiment, the frequency of nightmares decreased in both groups, but significantly more in the group where the positive scenario was associated with the sound.

Both groups experienced a decrease in nightmares per week, the researchers found. 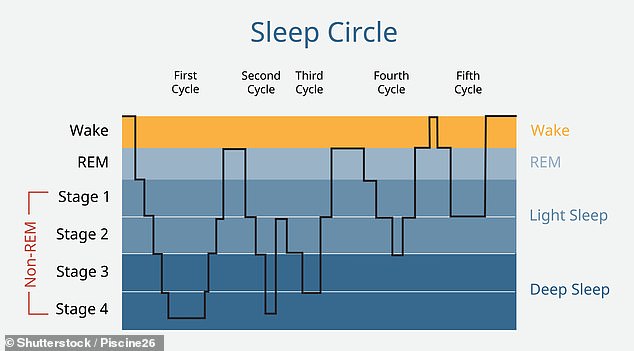 But the half that received the combination therapy had fewer nightmares immediately post intervention, as well as three months later, and experienced an increase in positive dreams.

The researchers say this new combined therapy should be trialed on larger scales and with different populations to see how well it works.

‘While the results of the therapy coupling will need to be replicated before this method can be widely applied, there is every indication that it is a particularly effective new treatment for the nightmare disorder,’ said Perogamvros.

‘The next step for us will be to test this method on nightmares linked to post-traumatic stress.’

These results also open up potential new avenues for treating other disorders such as insomnia and other symptoms of post-traumatic stress, such as flashbacks and anxiety.

THE FOUR STAGES OF SLEEP

A typical night’s sleep goes back and forth between the stages.

Stage 1: In the first five minutes or so after dropping off we are not deeply asleep.

We are still aware of our surroundings but our muscles start to relax, the heart beat slows down and brainwave patterns, known as theta waves, become irregular but rapid.

Although we are asleep during Stage 1, we may wake up from it feeling like we didn’t sleep at all.

After around five minutes our bodies move into stage two.

Stage 2: This is when we have drifted into sleep, and if awakened would know you we been asleep. Waking up is still fairly easy.

This stage is identified by short bursts of electrical activity in the brain known as spindles, and larger waves known as K-complexes, which indicate that the brain is still aware of what is going on around it before turning off to a sub-conscious level.

Heartbeat and breathing is slow, and muscles relax even further.

Brain wave activity slows but is marked by brief bursts of electrical activity.

Stage 3: Stage 3 non-REM sleep is the period of deep sleep that we need to feel refreshed in the morning.

It occurs in longer periods during the first half of the night.

Our heartbeat and breathing slow to their lowest levels during sleep and brain waves become even slower.

Our muscles are relaxed and it people may find it difficult to awaken us.

The body repairs muscles and tissues, stimulates growth and development, boosts immune function, and builds up energy for the next day.

Hypnagogia – the transitional state between wakefulness and sleep – is associated with NREM stages one to three.

Our eyes move rapidly from side to side behind closed eyelids.

Our breathing becomes faster and irregular, and heart rate and blood pressure increase to near waking levels.

Most dreaming occurs during REM sleep, although some can also occur in non-REM sleep.

Arm and leg muscles become temporarily paralysed, which prevents us from acting out our dreams.

As we age, we spend less of our time in REM sleep.

Memory consolidation most likely requires both non-REM and REM sleep.

Source: US National Institutes of Health