Vaccine uptake among kindergarteners has dropped to a 10-year low due to pandemic restrictions and a growing anti-vaxx movement sweeping the US.

Just 93 percent of children had their MMR, DTaP, varicella and polio vaccines by the start of the 2021-2022 school year, down from 94 percent the previous year, according to the Centers for Disease Control and Prevention (CDC).

It means that around 250,000 entered education unprotected against potentially fatal diseases like measles, tetanus and polio – which have started to come back in the US.

Dr Sean O’Leary, chair of the American Association of Pediatrics’ Committee on Infectious Diseases, said: ‘Hundreds of thousands of children are starting school without being fully protected against measles, mumps, whooping cough, and other diseases that can easily spread in classrooms.’ 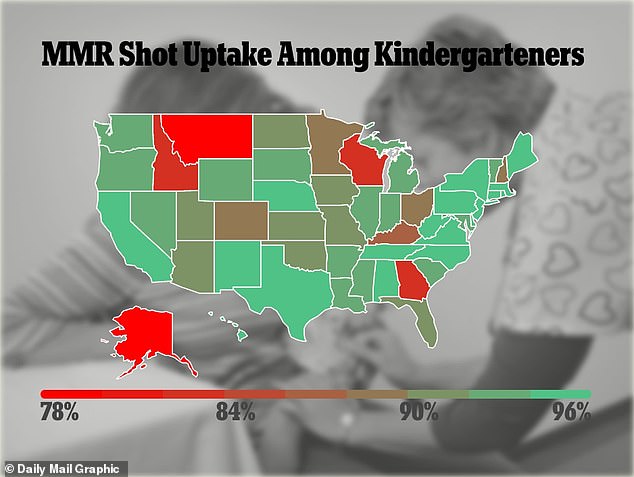 CDC data for the 2021-2022 school year shows a 10 year low of MMR vaccination rates among kindergarteners. Vaccination rate varies by state – with Alaska, Wisconsin, DC and Ohio revealed as those with the lowest percentage of MMR vaxxed kids 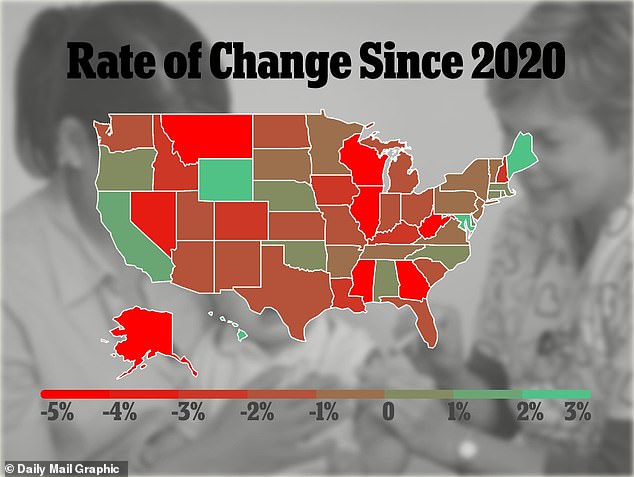 When compared with data from the 2020-2021 school year, MMR uptake can be seen to have dropped 1 percentage point since the previous year, with only 93.5% of registered kindergarteners vaccinated against measles

He added that ‘outbreaks like these harm children and are alarming’ and warned the issue ‘effects everyone in these communities.’

The study suggested declining vaccination rates were due to a range of pandemic-related factors.

On and off lockdowns and limited access to hospitals and clinics are believed to have contributed to the two percent drop in kindergarteners getting their jabs.

But the recent rise in anti-vaxx sentiment – spurred by misinformation around the Covid mRNA vaccines  – may have also played a role in the increasing number of parents reluctant to vaccinate their kids.

In October, the CDC added the Covid vaccine to the regular vaccine schedule, opening the door for local school districts in America to mandate the shot.

In the US, children are strongly advised to get the first dose of the measles mumps and rubella (MMR) vaccine at around 12 months old, then receiving the second dose between the ages of four to six.

DTaP, which protects from diphtheria, tetanus and acellular pertussis, requires five doses, given between the ages of two months and four to six years old on average.

The last two vaccines required to start school are against varicella and polio, both of which require multiple doses within a similar time-frame.

Vaccine coverage has been steadily dropping since the 2019-2020 school year.

Nationally, data from the CDC’s Morbidity and Mortality Weekly Report found two-dose MMR coverage at 93 percent, but the numbers varied by state.

This put the rate of MMR vaccination at its lowest since the 2013-2014 school year, where the average rate of fully vaxxed kindergarteners was 94.7.

In New York, where the highest number of kindergartners were fully vaccinated, 98 percent had received both jabs. Yet in Alaska, only 78 percent were reported to be fully vaxxed.

Scientists say that 95 percent of the population needs to be vaccinated against measles to reach herd immunity, due to its fast spread.

Herd immunity occurs when a large enough portion of a community is immune to a disease, therefore making further spread unlikely.

It is essential to reach this threshold in order to ensure children who are medically unable to receive vaccines are still able to attend school and remain safe.

Data was gathered from nearly 4million children enrolled in kindergarten – generally aged four to five – across 49 US states as well as the District of Columbia.

State and local entry requirements require schoolchildren in the US to provide evidence of vaccination to school nurses at the beginning of each year.

Of the surveyed kids, 2.6 percent had an official exemption – 0.2 percent medical and 2.3 percent non-medical – for one or more of the required vaccines.

Medical exemptions to vaccines are relatively uncommon and only given when a child has a proven medical contraindication to the vaccine.

These can include very rare instances of severe allergic reaction to the shot, which only occurs in around one in a million cases, or immunodeficiency caused by something like HIV, chemotherapy, or long-term immunosuppressive therapy. 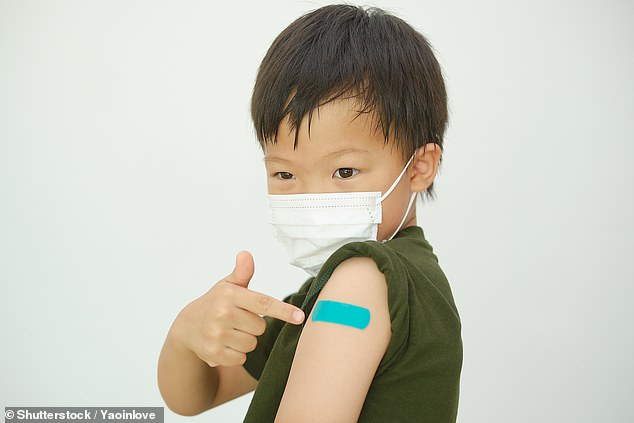 Children without the MMR vaccine risk contracting and spreading measles, a deadly disease that was declared eliminated in the US in 2000. Measles requires a herd immunity of 95% to prevent outbreaks, a level which US kindergarteners do not currently meet

Some states have introduced measures to remove both religious and personal belief exemptions to mitigate rapidly declining vaccination rates.

New York, West Virginia, Connecticut, Maine, California, Washington and Mississippi do not allow any exemption from vaccination other than medical.

Data on the 2021-2022 school year also showed a rise in children who were neither fully vaccinated, nor officially exempt – a category that now makes up 3.9 percent of kindergarteners nationwide.

These non-exempt, non-vaccinated students are often allowed to attend school while in a grace period, or provisionally enrolled.

Growing pockets of unvaccinated or under-vaccinated children, even within larger areas of high vaccine coverage, can lead to outbreaks of disease, the report warns.

The first US polio case in nearly a decade was reported this August. The unvaccinated adult was partially paralyzed by polio after catching the virus from an international traveler in Rockland County, NY.

The virus was later found in samples of wastewater in New York City.

Measles, once considered an eradicated disease, has also had a resurgence in the US this year, with at least 20 cases diagnosed in the upper Midwest.

Since it was declared eliminated in the US in 2000, the number of American children under the age of two going unvaccinated has quadrupled.

As the recent CDC numbers imply, this trend has only been accentuated by pandemic-induced vaccine skepticism.

TommyInnit: Life as one of the world’s top content creators