Old Trafford. San Siro. Bernabeu. Parc des Princes. The name Beckham has graced some of the most famous stadiums in world football.

Now there is a new ground to add to the list – Park View Road, Welling.

The home of ninth-tier side Erith & Belvedere is where Romeo Beckham, son of former England captain David, made his debut for Brentford B in a London Senior Cup match on Tuesday.

The 20-year-old, who has joined on loan from Inter Miami II until the end of the season, came on as a second-half substitute with the Bees trailing 2-1, before a late comeback brought a 3-2 win.

The Beckham effect certainly had an impact off the pitch too, with a club record 554 fans making an appearance on a cold, soggy evening in south east London.

Watching on among that crowd, hidden under the hood of a black raincoat, was father David, who saw his son continue the Beckham tradition by putting in a dangerous cross from the right wing – a moment the admin of the Erith & Belvedere FC Twitter account was not going to miss.

Romeo also showed he could bend it like Beckham with a couple of late corners as well as hitting the bar with a header – though he was flagged offside.

By this point Beckham senior’s presence had been spotted, with a growing crowd of fans making a beeline for the 47-year-old to try to get a selfie.

Welling United, who share the ground with Erith & Belvedere, were equally delighted to have such a famous star watching on and tweeted an image of a smiling Beckham. 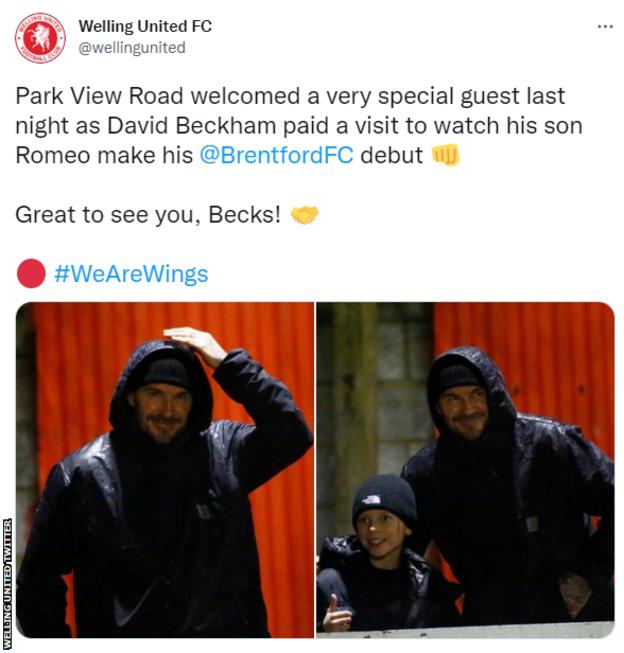 But with the crowd building, Beckham opted to make an unconventional exit by leaping over a fence and scrambling through some bushes, before demonstrating a turn of pace not seen since his playing days with a dash across a rain-sodden field.

Speaking about Romeo Beckham’s impact, Brentford B boss Neil MacFarlane said: “Romeo really drove us forward in the wing-back position. He created some really good moments for us with some terrific deliveries.

“He had an opportunity to score as well and I was thrilled with him and the group in general for keeping on the front foot. We never gave up and we got through.”

How to spend less time on your phone in 2023, according to leading experts

Campbell Johnstone: Former All Black hopes coming out will ‘take away the...