Revealed: how US transition to electric cars threatens environmental havoc | US news 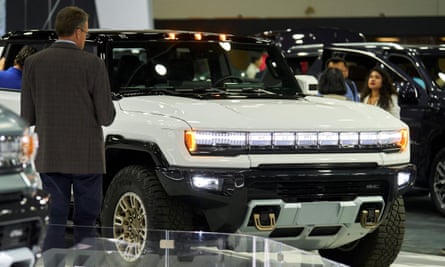 The US’s transition to electric vehicles could require three times as much lithium as is currently produced for the entire global market, causing needless water shortages, Indigenous land grabs, and ecosystem destruction inside and outside its borders, new research finds.

It warns that unless the US’s dependence on cars in towns and cities falls drastically, the transition to lithium battery-powered electric vehicles by 2050 will deepen global environmental and social inequalities linked to mining – and may even jeopardize the 1.5C global heating target.

But ambitious policies investing in mass transit, walkable towns and cities, and robust battery recycling in the US would slash the amount of extra lithium required in 2050 by more than 90%.

In fact, this first-of-its-kind modeling shows it is possible to have more transport options for Americans that are safer, healthier and less segregated, and less harmful mining while making rapid progress to zero emissions.

The research by the Climate and Community Project and University of California, Davis, shared exclusively with the Guardian, comes at a critical juncture with the rollout of historic funding for electric vehicles through Joe Biden’s Inflation Reduction and Infrastructure Investment and Jobs Acts.

Recognizing the harms of ‘white gold’

The global demand for lithium, also known as white gold, is predicted to rise over 40 times by 2040, driven predominantly by the shift to electric vehicles. Grassroots protests and lawsuits against lithium mining are on the rise from the US and Chile to Serbia and Tibet amid rising concern about the socio-environmental impacts and increasingly tense geopolitics around supply.

The US’s affinity for cars, especially big ones, and sprawling cities and suburbs where driving to work, school and shop is often the only option, gives its transition to electric vehicles major global significance.

No matter what path it chooses, the US will achieve zero emission transportation by 2050, according to the research. But the speed of the transition – as well as who benefits and who suffers from it – will depend on the number and size of electric vehicles (and batteries) Americans opt for going forward.

“Preserving the status quo might seem like the politically easier option, but it’s not the fastest way to get people out of cars or the fairest way to decarbonize,” said Thea Riofrancos, associate professor of political science at Providence College and lead author of the report.

“We can either electrify the status quo to reach zero emissions, or the energy transition can be used as an opportunity to rethink our cities and the transportation sector so that it’s more environmentally and socially just, both in the US and globally.”

“The report brings into light possibilities for a future without fossil fuels that minimizes mineral extraction and new harms to communities in lithium-rich areas,” said Pía Marchegiani, policy director at the Environment and Natural Resources Foundation in Argentina.

Transportation is the biggest source of carbon emissions in the US – and the only sector in which emissions are still rising – making it crucial to phase out gas and diesel vehicles as quickly as possible to limit the climate breakdown.

Biden’s strategy to fully decarbonize the transportation sector by 2050 puts some focus on mass transit and land-use planning, but so far the messaging – and funds – have been geared toward encouraging Americans to swap gas-guzzling cars for electric vehicles rather than change the way they travel.

It’s working: over half of the nation’s car sales are predicted to be electric by 2030, and states like New York and California have passed laws phasing out the sale of gas cars.

This is good news but there’s a catch: lithium.

Electric vehicles are already the largest source of demand for lithium – the soft, white metal common to all current rechargeable batteries.

Mining lithium is a fraught business, and the rise in demand for EVs is contributing to a rise in social and environmental harms – and global supply chain bottlenecks.

If Americans continue to depend on cars at the current rate, by 2050 the US alone would need triple the amount of lithium currently produced for the entire global market, which would have dire consequences for water and food supplies, biodiversity, and Indigenous rights.

But it doesn’t have to be this way, according to the report Achieving Zero Emission Transportation With More Mobility and Less Mining.

In each scenario, the US achieves zero emission transportation by 2050 and in each case some additional lithium mining will be needed.

How much lithium depends on policy decisions taken now, according to the report, impacting economic prosperity, public health, environmental justice, ecosystems and communities at every part of the supply chain for decades to come.

In the best-case scenario – comparing the status quo in which EV battery size grows and US car dependency remains stable – with ambitious public transit, city density and recycling policies, the lithium demand would be 92% lower. (Battery size, like the size of a fuel tank, dictates range – or how far you can travel before having to recharge.)

But results show that even if Americans can’t wean themselves off cars with big lithium batteries, increasing the density of metropolitan areas and investing in mass transit would cut cumulative demand for lithium between 18% and 66%. Limiting the size of EV batteries alone can cut lithium demand by up to 42% by 2050.

The largest reduction will come from changing the way we get around towns and cities – fewer cars, more walking, cycling and public transit made possible by denser cities – followed by downsizing vehicles and recycling batteries.

It can be done: cities around the world have already begun to reduce car use in order to improve air pollution, road safety and quality of life. In Paris, car use declined nearly 30% from 2001 to 2015, while in London it fell by nearly 40%.

And despite the cultural attachment to driving, fewer cars on the roads would not mean a sacrifice in the quality of life, convenience or safety for Americans, according to coauthor Kira McDonald, an economist and urban policy researcher.

“If the policies, institutions, and spending patterns that shaped our existing car dependent infrastructure and built environment change, then alternative modes of transportation can be made far safer, far more convenient, and faster than cars – and immensely more pleasant and fun.”

Protecting people and the planet

Lithium deposits are geologically widespread and abundant, but 95% of global production is currently concentrated in Australia, Chile, China and Argentina. Large new deposits have been found in diverse countries including Mexico, the US, Portugal, Germany, Kazakhstan, Congo and Mali.

Lithium mining is, like all mining, environmentally and socially harmful. More than half the current lithium production, which is very water intensive, takes place in regions blighted by water shortages that are likely to get worse due to global heating.

Despite being a relatively new industry, lithium extraction has a track record of land and water pollution, ecosystem destruction and violations against Indigenous and rural communities.

In the US, only one small lithium mine, in Nevada, is currently operational, but the drought-affected state has at least 50 new projects under development. This includes the massive Thacker Pass mine, approved at the end of the Trump administration, which is opposed by some environmentalists, ranchers and Indigenous tribes due to the lack of consultation and inadequate environmental review.

In Chile and Argentina, the world’s second- and fourth-largest lithium producers respectively, broken promises by corporations, water scarcity, land contamination and the lack of informed consent from Indigenous groups has fueled resistance and social conflicts.

The lithium rush is already gathering pace, but keeping lithium mining to an absolute minimum is crucial for frontline communities – and it also makes good economic sense, according to the report.

Most forecasters predict a supply crunch in the next five to 10 years – a period when rapid decarbonization must take place to avert even more catastrophic global heating. The price of lithium batteries – the most expensive component of an EV – went up for the first time last year as demand outweighed supply.

Payal Sampat, mining program director at Earthworks, said: “The findings of this report must jumpstart policies to invest in robust, accessible public transit systems that advance equity, reduce pollution and get people where they need to go.”

NHS crisis: Why are Brits still struggling to get GP appointments?

Major change to Universal Credit rules is now in place