Heavy drinkers see the labels as a ‘ploy by the industry’ to appear like it cares about consumers’ health.

Oxfords Brookes University experts say it means the labels, introduced more than a decade ago, are ‘unlikely to be effective’.

Instead, messages need to be more ‘personally relevant to consumers’, scientists concluded.

In the UK, Britons are urged not to drink more than 14 units a week on a regular basis — the equivalent of six pints of lager or 10 small glasses of wine. 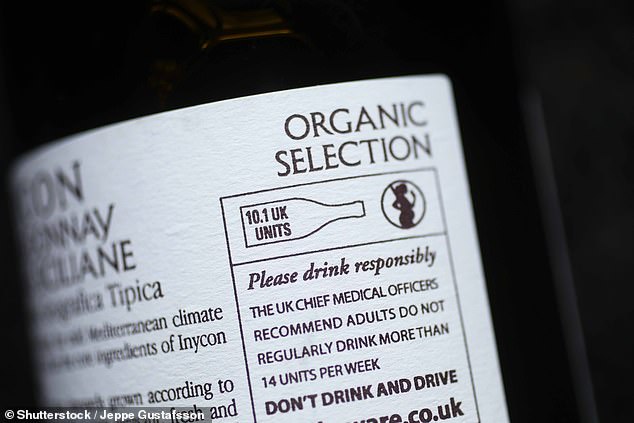 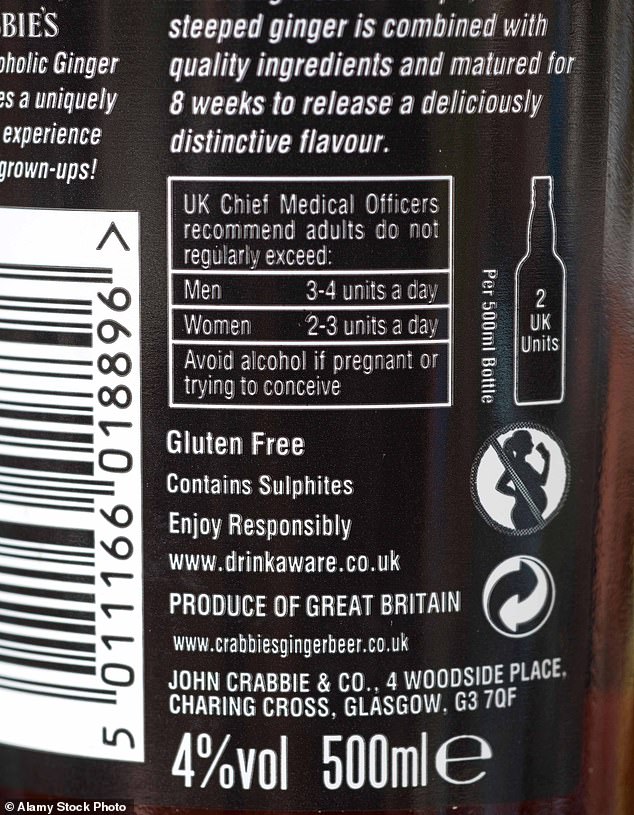 The UK alcohol industry committed to ensuring 80 per cent of bottles and cans are labelled with how many units are in the drink, what the national guidelines are, and pregnancy warnings

Americans are advised not to drink more than 14 small cans of beer a week for men and seven small glasses of wine for women.

Under a crackdown introduced in 2011, the UK alcohol industry committed to ensure 80 per cent of bottles and cans are labelled with responsibility warnings.

This includes stating how many units are in every drink, what national guidelines are, and pregnancy warnings. It also includes the generic ‘please drink responsibly’ messaging.

Experts described it as nanny-statism.

The new study was published in the British Journal of Health Psychology.

Researchers quizzed 20 drinkers, aged from their 20s to their 60s, about their views on the warnings and how they influence boozing. The majority were classed as risky drinkers, meaning they are in the top 5 per cent of drinkers nationally.

Participants were shown three types of labels, with one set promoting ‘responsible drinking’, in line with most current packaging.

And a third had negative health messages, suggesting drinking more increases the dangers.

They were all asked for their opinions on all three and how they might affect their drinking behaviour.

Results showed that risky drinkers did not respond positively to any of the warnings.

The team said this is because they tend to view themselves as responsible in their consumption.

This meant they did not see the info on labels as being relevant to themselves, the researchers said.

They did not support including health information on labels, but did say information about the risk of cancer from drinking had a stronger impact.

Lead author Dr Emma Davies, a psychologist at Oxford Brookes University, said: ‘We know that excessive alcohol use can cause health problems

‘The government’s voluntary agreement with the alcohol industry in 2011 on product labelling was an attempt to encourage consumers to consider the risks of drinking.

‘Our research has shown generic messages on responsible drinking are unlikely to be effective and that messages need to be more personally relevant to consumers.

‘Many people who are considered risky drinkers using existing measures view themselves as responsible and moderate in their alcohol consumption, and product labelling is unlikely to be effective unless this view can be challenged.’

DO YOU DRINK TOO MUCH ALCOHOL? THE 10 QUESTIONS THAT REVEAL YOUR RISK

One screening tool used widely by medical professionals is the AUDIT (Alcohol Use Disorders Identification Tests). Developed in collaboration with the World Health Organisation, the 10-question test is considered to be the gold standard in helping to determine if someone has alcohol abuse problems.

The test has been reproduced here with permission from the WHO.

To complete it, answer each question and note down the corresponding score.

0-7: You are within the sensible drinking range and have a low risk of alcohol-related problems.

Over 8: Indicate harmful or hazardous drinking.

8-15: Medium level of risk. Drinking at your current level puts you at risk of developing problems with your health and life in general, such as work and relationships. Consider cutting down (see below for tips).

16-19: Higher risk of complications from alcohol. Cutting back on your own may be difficult at this level, as you may be dependent, so you may need professional help from your GP and/or a counsellor.

20 and over: Possible dependence. Your drinking is already causing you problems, and you could very well be dependent. You should definitely consider stopping gradually or at least reduce your drinking. You should seek professional help to ascertain the level of your dependence and the safest way to withdraw from alcohol.

Severe dependence may need medically assisted withdrawal, or detox, in a hospital or a specialist clinic. This is due to the likelihood of severe alcohol withdrawal symptoms in the first 48 hours needing specialist treatment.