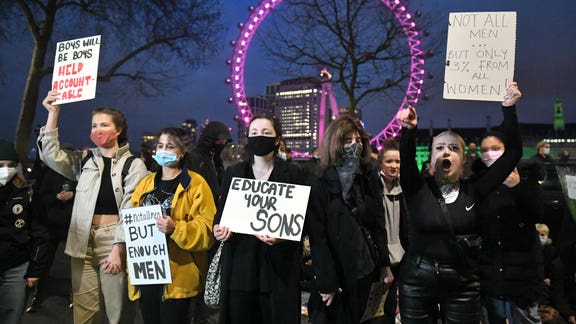 Priti Patel has said a new survey to help tackle violence against women and girls received more than 160,000 response.

The call for evidence initially closed in February following an initial 10-week period and invited response from those with views on, or lived experiences of, crimes considered as violence against women and girls.

In the wake Sarah Everard’s death the survey was reopened on March 12 for two weeks following an outpouring of experiences shared online.

The Home Secretary said the public consultation received an “unprecedented” number of submissions after the death of Ms Everard, a 33-year-old marketing executive.

162,513 submissions were made and Patel said a strategy for tackling violence against women and girls will be published “later this year”.

Speaking on Twitter, the Home Secretary said: I’d like to thank every single one of you who contributed to an unprecedented 162,513 responses following Sarah’s tragic death.

“This Government is listening and your responses will inform a new tackling violence against women and girls strategy, which will be published later this year.”

Anyone over 16 was invited to respond to the survey, including people who have experienced violence, those who work with survivors and relevant professionals.

Ms Everard’s death sparked mass debate about the safety of women in the UK.

Earlier this month, Prime Minister Boris Johnson  said the Government is committed to doing “everything we can” to make the streets safe for women in the wake of the killing of Sarah Everard.

Mr Johnson said: “The horrific case of Sarah Everard has unleashed a wave of feeling about women not feeling safe at night. We must do everything we can to ensure our streets are safe.

“Ultimately, we must drive out violence against women and girls and make every part of the criminal justice system work to better protect and defend them.”

GHB: Killer drug to be made a Class B substance