Tone deaf: Pfizer boss claims company’s Covid vaccine will remain ‘free for all Americans’ — even though firm’s 10,000% markup is set to drive health insurance premiums up

Pfizer CEO Albert Bourla is under fire after claiming his firm’s Covid vaccine will remain ‘free for all Americans’ – despite plans for a massive price hike.

The pharma giant announced last month it would raise the price of its shot to $130, once the government uses up the doses it has bought and the vaccine goes on the open market next year.

That marks a 10,000 per cent mark up from the estimated $1.18 it costs the New York City-based company to produce each dose of the vaccine.

The US government has been paying around $30 per dose up to this point and then distributing the shots for free to the public.

Insurers will cover the increased cost, meaning Americans won’t pay up front, but analysts warn that this will lead to upward pressure on premiums paid by millions of Americans and their employers.

Mr Bourla told a health conference last week: ‘Americans will see no difference, [it] will be free for them to get, regardless of the insurance they have.’

But David Mitchell, co-founder of the advocacy group Patients for Affordable Drugs, told DailyMail.com that the comments were ‘dishonest’.

‘He [Bourla] knows it’s not true. The vaccine is not going to be free. He is going to charge $120 list price for the vaccine and it will be paid. The questions is who will pay it.’ 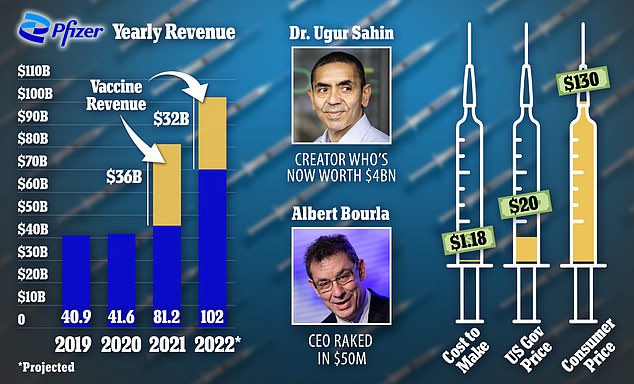 Pfizer is charging $130 for its COVID-19 vaccine  – a 10,000% mark-up from the estimated $1.18 it costs them to develop a single dose of the vaccine. The firm was charging the US government around $20 per shot but rose prices in an effort to make up for poor demand for the jabs. It is forecasted to rake in over $100billion in revenue this year, and brought in $81.2billion last year. These figures well clear the $40billion per year it was earning the years prior. Pfizer CEO Albert Bourla has earned $50million in compensation over the past two years, while BioNTech found Dr Ugar Sahin is now a billionaire.

It comes after Pfizer’s chief financial officer has described the Covid pandemic as a ‘multi-billion dollar franchise’ — and expects profit to continue.

David Denton told investors in an earnings call last week his company’s vaccine and antiviral would still be ‘relevant for many years to come’.

The CFO said he expects the Covid virus to be ‘somewhat like a flu… but more deadly’ — meaning therapeutics will still have a massive role in controlling the virus.

So far Pfizer has reaped about $80 billion in yearly revenue from sales of Covid vaccines and the antiviral drug Paxlovid.

Mr Bourla himself has been a major winner during the pandemic, receiving an estimated $50million in compensation between 2021 and 2022 as a result of the pandemic windfall.

A report by Public Citizen estimates that it costs Pfizer around $1.18 to manufacture each individual dose of the vaccine – making next year’s $130 price-point a 10,000 per cent mark up.

Mr Mitchell told DailyMail.com that the costs would be passed to tax payers, patients, consumers and employees through various means.

As the shots are added to the liabilities of insurance companies, the costs will be passed on to people who pay premiums.

Because many Americans receive insurance through their employer, companies will be forced to use larger portions of their employee compensation pool to pay for health insurance costs.

The cost of shots will be paid for by all taxpayers as well, to fund the vaccine for people on government-run plans like Medicare and Medicaid.

Robbie Silverman, a senior advocacy manager from Oxfam America, noted to DailyMail.com that BioNTech, who partnered with Pfizer on the rollout of its shot, also received millions in taxpayer funds from Germany.

People appear to be more likely to suffer a Covid rebound if they use Pfizer‘s antiviral drug Paxlovid, a study suggests.

In the past few months, President Joe Biden, Dr Anthony Fauci and CDC director Dr Rochelle Walensky have all tested positive again quickly after they stopped taking the drug.

Scientists from Scripps Research Translational Institute in La Jolla, California, compared 127 infected people who used Paxlovid to 43 others who beat the virus without the drug.

They found that 14 per cent of Paxlovid users tested positive for the virus in the weeks after recovering. Meanwhile, only nine per cent tested positive again in the group that didn’t use the antiviral.

The study was small and the researchers don’t feel confident that the results weren’t chance, but they aim to stand it up in a future trial involving 800 people.

The exact causes of the rebound are unknown, but doctors suspect it is because of the how the drug functions. Rather than killing the virus outright, Paxlovid stop its replication within the body.

Experts theorize that, having been suppressed by Paxlovid, Covid bounces back when the drug vanishes from the body, leading to high viral levels and potent immune responses that can cause symptoms to reappear.

Notable examples of the Covid rebounds include President Joe Biden, who suffered a rebound after being infected with the virus in June and receiving Paxlovid