Robin and his spaniel Biggles played host to a group of four hardy walkers on a walk in the central Brecon Beacons more commonly referred to as the Southern Horseshoe and they began from the car park just to the south of the Neuadd reservoirs in the Taff Fechan Valley.

During the 19th century Cardiff and the Rhondda Valleys all began to expand because of industry and a much needed water supply for household and industrial use was required.

The stone was conveyed on a temporary railway line built from Torpantau halt on the Brecon and Merthyr Junction Railway and the upper reservoir with its listed dam situated at 459m makes it the highest reservoir in the Brecon Beacons National Park.

The weather was slightly better than forecasted as they set off in sunshine with very little wind, walking up the road towards the reservoirs. 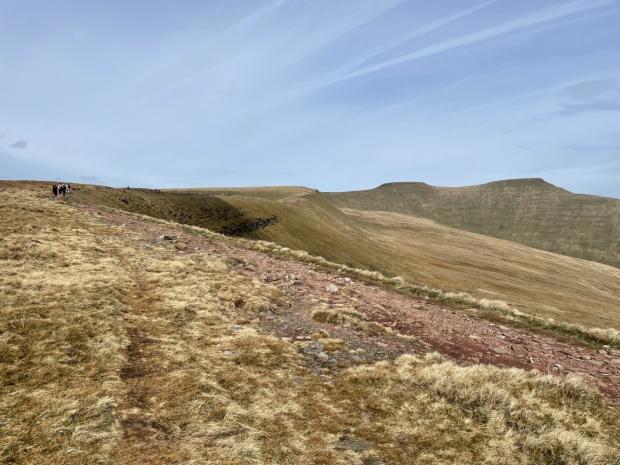 During the last two years the landscape in this area has been considerably altered with the removal of the dam from the Lower Neuadd reservoir and a new path has been installed.

Utilising the new pathway they began the long climb up towards the ridgeway above and as the path steepened big stone slabs had been laid, no doubt to prevent erosion and eventually they reached the ridgeway at Graig Fan Ddu and collapsed for morning break.

Soon they were joined by other walkers taking the same route as they continued along the ridges of Rhiw yr Ysgyfarnog and Craig Gwaun Taf with incredible panoramic views under a cloudless sky as Biggles bounced along greeting other walkers very enthusiastically.

Along the ridge they ventured across a stone cairn that had been lovingly built as a tribute to a foregone walker complete with his flask, hiking mug and a photo.

Arriving at Bwlch Duwynt or the Windy Gap near the pathway which brings people up from Pont ar Daf, off the A470 to climb to Pen y Fan it was busy and along with others they began to scale the shelves of rock up onto the summit of Corn Du. 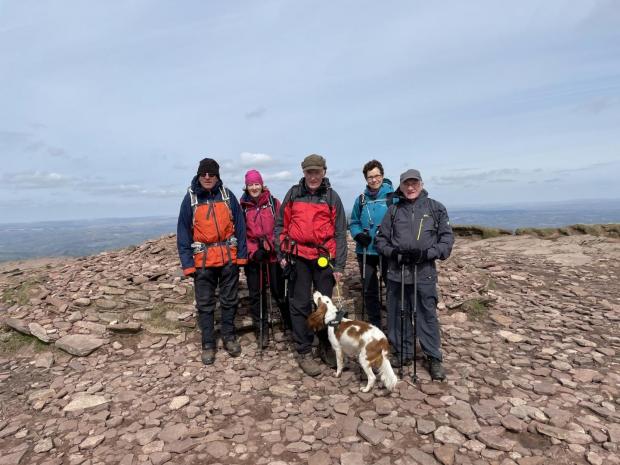 Meaning Black Horn its rocky flat summit stands at 873m which makes it the second highest peak in the Central Beacons.

A descent followed by a climb led them up onto Pen y Fan which at a height of 886m is the highest peak in South Wales and the summits of Corn Du and Pen y Fan when seen from a distance are referred to as Cadair Arthur or Arthur’s Chair, because of the shape.

This is National Trust land used by both walkers and the military and Cwm Llwch to the north and Cwm Sere to the east below them were created by glacial erosion.

Views towards the Severn Estuary, the Black Mountains, Herefordshire, Gloucestershire, Somerset, the Gower Peninsula and West Wales can be seen on a clear day but it was a little windy to stop for long, so the group headed steeply downhill on a rocky path into Cwm Sere to locate a place out of the southerly wind for their lunch break.

In order to complete the three peaks, a steep climb followed in order to conquer Cribyn standing at 795m which was free of other walkers before the descent to 599m to join the old drover’s road, a bridleway at Bwlch ar y Fan situated below Fan y Big on the opposite side of the valley.

Following the rough track downhill with views through the Taff Fechan valley eventually brought them back to their start point after what had been a lovely mountain trek.