A RESIDENT at MHA Ty Gwyn care home in Penarth was able to ‘seize the day’ recently when he was reunited with one of his old band buddies.

Cyril Petherick, who recently moved into the care home, loves telling staff about his memories and the amazing adventures he had in his younger years.

He was a bass guitar player for a local band called The Backbeats, but later went on to accompany Shakin’ Stevens and the Sunsets, Screaming Lord Sutch, as well as Mad Dog and The David.

Mr Petherick revealed his music adventures to Neil Chadwick, Community Co-ordinator at MHA Ty Gwyn, and shared his stories with the other residents and staff.

Realising how important these memories were to Mr Petherick, Mr Chadwick started searching the web for music clips, photos and videos of Mr Petherick in his performing days.

He soon came across a page on a well-known social media platform that was for Welsh Bands of the 50’s, 60’s, and 70’s.

It was within this group that Mr Chadwick found lots of pictures of Mr Petherick performing with his various groups throughout his career.

He downloaded these pictures and sat with Mr Petherick to show them to him.

Mr Petherick was soon recounting the exact performance, the location and what bass guitar he was playing. He also noticed one of his old band mates Bat ‘Batman’ Goddard in the pictures saying how much he missed Bat and would love to see him again.

Mr Chadwick set to on his research mission again and whilst researching more pictures and noticed a post on the social media group by Bat Goddard.

He quickly made contact with Bat and explained Mr Petherick had taken up residence in MHA Ty Gwyn and was planning a surprise.

Bat soon replied to Mr Chadwick and plans were put in place for them to meet.

On the day Mr Petherick was told he had a visitor but not who it was. He was taken down to the room where indoor visits were taking place and to his surprise there was his old band buddy Bat ‘Batman’ Goddard.

It was a very emotional meeting with lots of happy memories exchanged.

As if it wasn’t special enough Mr Chadwick had gone one step further and made Mr Petherick a collage of the photos he had found online. 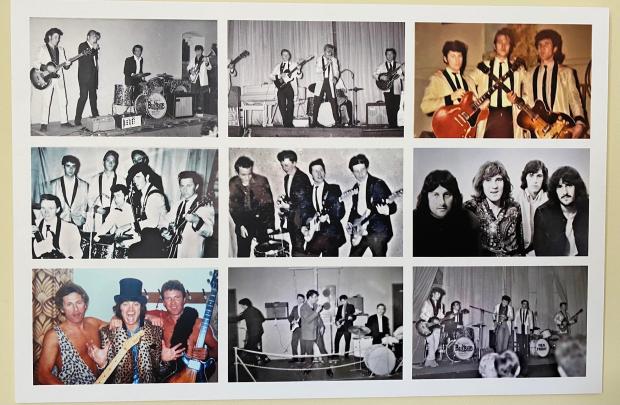 The collage of pictures.

Bat presented him with the collage which left him speechless.

Mr Petherick said: “It was really nice and rather emotional to see my old buddy Bat again after all this time.

“The wall collage that Neil had produced for me is amazing and brings backs a lot of happy memories.”

Mr Chadwick added: “It was lovely creating this reunion for Cyril.

“To help a resident ‘seize the day’ really gives a sense of accomplishment – more so when you see how much they are enjoying it like Cyril did today.

“I am looking forward to the next Seize the Day challenge set to me by a resident.”

Seize the Day was created by MHA, a national charity which enables people to live later life well by inspiring the best care and wellbeing.

Residents are asked what one thing they would love to achieve, and the initiative then helps that dream come to life.

Sheffield Black Hair Care Project is ‘therapy on so many levels’