A TEACHER based at a school in Wenvoe has won a prestigious award.

Victoria Carey, who has been teaching for 16 years including a decade at Mary Immaculate High School, was selected from thousands of nominees as one of 102 Pearson National Teaching Silver Award winners across the country.

She has also been shortlisted for the gold award.

Leading up to this, Ms Carey was honoured with a Silver Award in The Professional Teaching Awards Cymru for ‘Teacher of the Year in a Secondary School’ category; this award is given to teachers for their outstanding commitment to changing the lives of children they work with every day.

Ms Carey said: “I was not expecting it at all; it’s an amazing opportunity to showcase what we do at the school.

“I’m just a representative of the school which has some exceptional staff; we work as a unit and share resources and ideas.

“The school is a lovely environment and I have been so lucky to work with individuals who have inspired, supported and developed me as a classroom teacher, colleague and leader.

“There are so many people I could thank for helping me get to where I am today, and I feel privileged to work in a school like Mary Immaculate which encourages and supports everyone to excel and develop.”

The school has described Ms Carey’s dedication as “infectious” creating a love of English with pupils and unlocking their potential, while raising pupil aspirations.

And the Gov.Wales website states that Ms Carey is “always focused on achieving the best outcomes for the young people in her care”.

Ms Carey has been shortlisted to win one of just 15 Gold Awards later in the year awarded by The Pearson National Teaching Awards – which is now in its 22nd year – in a programme which will be broadcasted on the BBC. 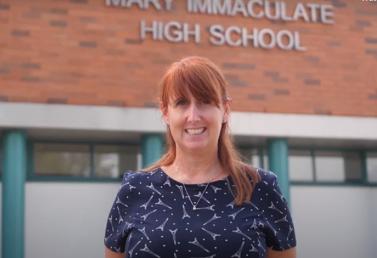 “I think if I won the gold, I’d be really nervous,” admitted Ms Carey.

“I’d probably go bright red and stutter so – in a way – it’s my nightmare, but it would also be amazing.”

Mary Immaculate High School’s headteacher, Huw Powell, is “delighted” that Ms Carey has won silver and been shortlisted for gold.

Mr Powell said: “I am delighted for Victoria to receive this award having contributed greatly to the school’s success over a number of years.

“Victoria’s hard work and determination deserves to be recognised with the Teacher of the Year award.”

Long Covid: Teenager was so ill she thought she might die