A North Carolina man lost 154lbs and gained a six-pack in just nine months after ditching his $2.5k a year Pepsi addiction.

Taylor Robertson, 27, from Winston-Salem, used to guzzle 12 cans of soda every day, be a regular at his local bar, and rely on KFC for lunch and dinner.

But after ditching Pepsi, going sober, starting daily two-hour workouts and swapping fast food for one meal of chicken and rice a day in October 2021, the extra weight started to just ‘fall off’ his body.

When Mr Roberston made the change his weight had ballooned to 324lbs (147kg), he had a waist size of 46 inches and he was starting to stop breathing while asleep. 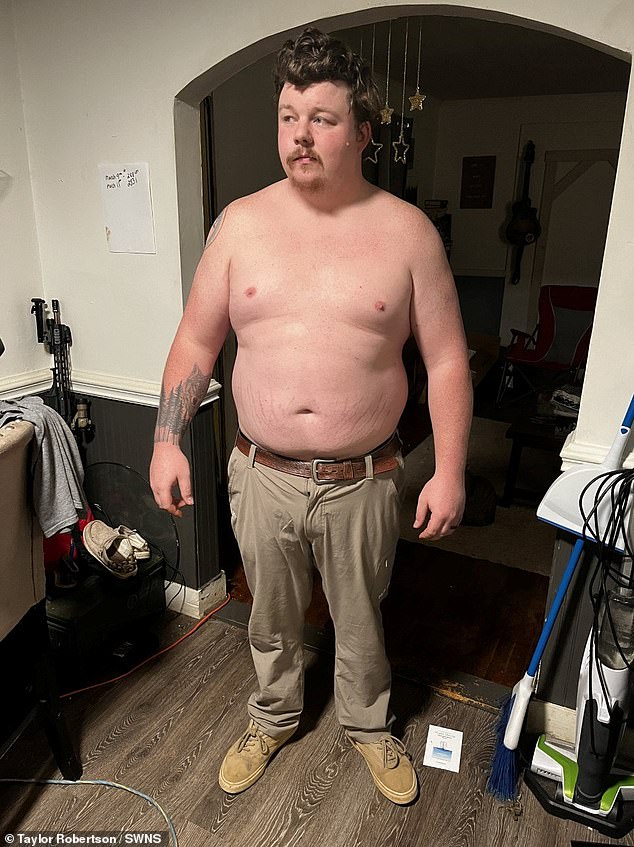 Taylor Robertson, 27, from Winston-Salem in North Carolina, tipped the scales at 324lbs with a waist size of 46 inches after guzzling 12 cans of Pepsi a day and relying on KFC for lunch and dinner 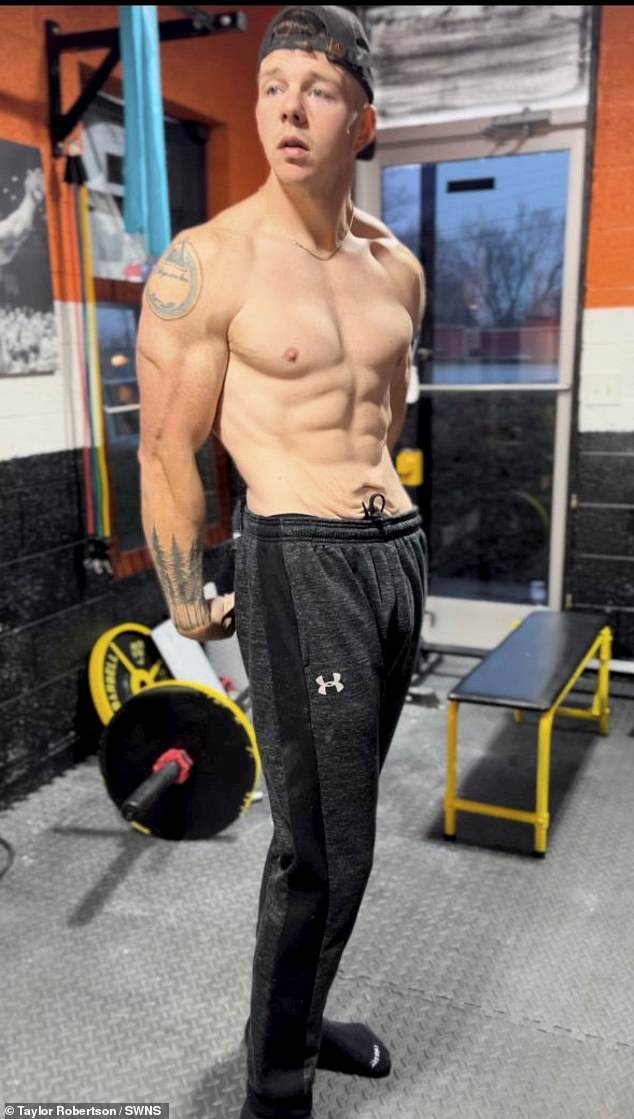 But after he stopped breathing while falling asleep, the plumber decided to make a change in October 2021. He quit alcohol, started eating only one meal a day and headed to the gym. He said that the weight just started to ‘fall off’ him. (Shown above after the transformation)

He’s kept up with the new lifestyle to be his ‘best’ self for fiancé Hayleigh Cass, 24, and is now planning to do an Ironman competition.

Mr Robertson said he fell into a ‘lazy lifestyle’ after college, where he regularly ate fast food and developed an alcohol problem.

He became reliant on Pepsi as a ‘pick-me-up’ from drinking, saying he would wake up with a hangover every morning.

Describing his life before the weight loss, he said: ‘I used to wake up hungover every day.

‘I would talk to girls at a bar when I was drunk — I realized it was a detriment to my relationship.

His worries only rose when he started suffering from sleep apnea — a potentially serious condition where someone stops breathing while asleep.

‘My fiancé had to wake me up and say hey you’re not breathing,’ he said. 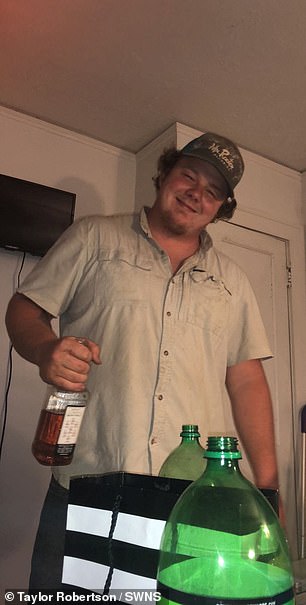 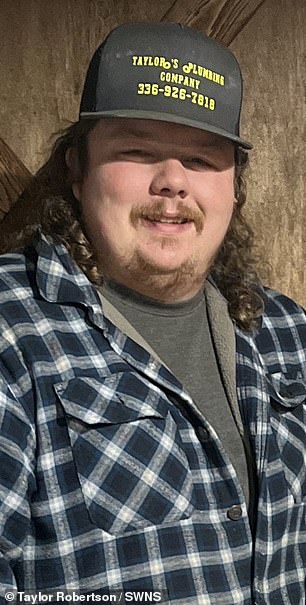 Mr Robertson, who runs his own plumbing company, said that he fell into a ‘lazy’ lifestyle after college that saw him drink alcohol every day and spend hours at the bar (Pictured before) 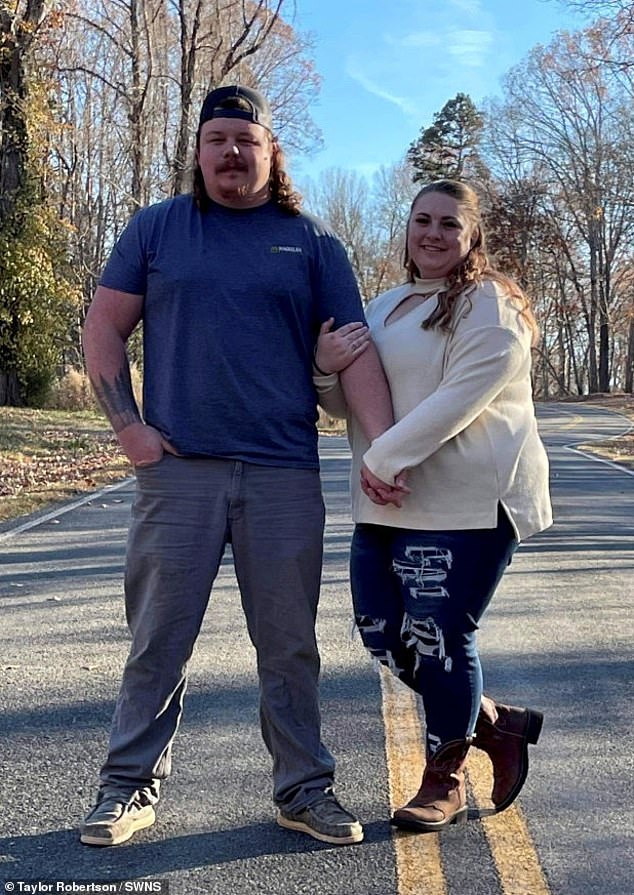 He began to fear for his relationship with fiance Hayleigh Cass, 24 (pictured), after he began to stop breathing when he fell asleep

Mr Robertson is keen on his new lifestyle, and has maintained eating just one meal a day, saying he wants to be the best version of himself. He spends two hours in the gym a day working out

Wanting to turn his life around, Mr Robertson decided to go sober in October 2021 and immediately started to see a difference.

‘I lost some weight after getting sober and had spare time that used to be spent drinking,’ he said.

This gave him the time to start researching weight loss and healthy eating via watching videos on YouTube.

‘I found a diet of one meal a day and decided to give it a go,’ he said.

‘At first I was having a Chinese for the meal which did work but I realized that wasn’t very healthy and now cook myself easy meals like chicken and rice.’

‘Before I was drinking about 12 cans of Pepsi a day – using it as a chaser after an alcoholic drink.

‘I started at the gym and the weight just fell off me.’

Mr Roberston joined his gym and started by walking on the treadmill before switching to weight lifting.

He now spends about two hours working out there every day.

Taylor still sticks to one large meal a day – but makes sure it’s healthy and home cooked.

Talking about the results, he said: ‘It’s happened so fast.

‘I now want to do an Iron man.

‘It’s my life and I realize I can control it.’

‘I’m trying to be the best person I can be.’

Mr Robertson, who also owns a plumbing company, used to spend about $13 on Pepsi every day — with a pack of six cans costing $6.53.

If you enjoyed this story, why not read:

I ballooned to 300lbs by ‘comfort eating’ — but I lost half my body weight in a year after my marriage broke down and a friend called me ‘fat’.

‘I feel small for the first time in my life’: Woman, 44, who lost 417lbs bursts into tears of joy as she gets surgery to remove 47lbs of excess skin — before proudly showing off incredible transformation

WHAT IS SLEEP APNEA AND HOW IS IT TREATED?

Sleep apnea is when your breathing stops and starts while you sleep. The most common type is called obstructive sleep apnea (OSA).

Symptoms of sleep apnoea mainly include:

During the day, symptoms include:

What is sleep apnea?

The most common type of sleep apnea (OSA) happens when muscles in your head and neck relax while you’re asleep, causing the surrounding tissue to press on your windpipe.

This stops you breathing, triggering the brain to wake you up when it detects the lack of oxygen.

Drinking too much alcohol regularly can cause the condition, because drinking relaxes the muscles in the neck and throat — leading them to collapse and block the windpipe.

Being overweight can also cause this, because fat deposits in the upper respiratory tract narrow the airways decreasing muscle activity in the region — which can disrupt air flow to the windpipes.

People with moderate or severe apnoea may need to use a CPAP machine which is given for free on the NHS.

A CPAP machine gently pumps air into a mask worn over the mouth or nose during sleep.

Less common treatments for sleep apnoea include a gum shield-like device that holds your airways open while you sleep or surgery to help your breathing, such as removing large tonsils.

It’s recommended people with the condition try and lose weight if they are overweight, sleep on their side, not smoke or drink too much alcohol – especially shortly before going to sleep – and not taking sleeping pills.

People make £1,000 with odd tricks from selling holiday snaps to renting out dog