The vaccination coverage for measles — one of the most contagious human viruses yet totally preventable — has been consistently dropping due since the start of the Covid pandemic.

Misinformation linked to Covid vaccines has also led to swathes of parents rejecting normal childhood shots, despite immunizations being the most effective way to protect children from measles.

A joint report by the World Health Organization (WHO) and the Centers for Disease Prevention and Control (CDC) found that 25 million children went without their first dose and another 14.7 million missed their second shot.

The drop is a blow to worldwide efforts to eliminate the virus and leaves millions of young children vulnerable to infection.

Researchers from the University of Liverpool analyzed Google Trends and found that anti-vaccine searches ‘have had a continued and growing presence during the pandemic.’ 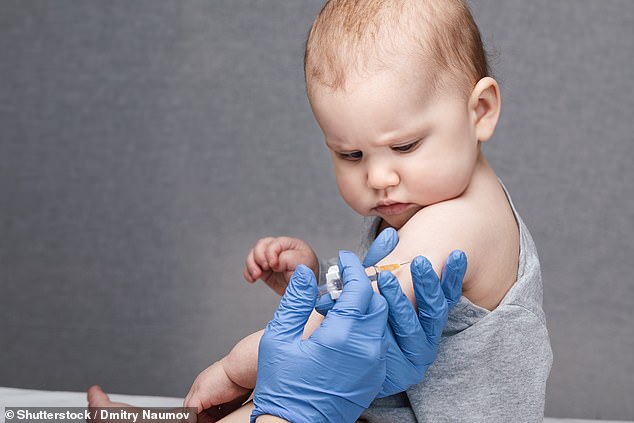 Twenty-five million children went without their first dose and another 14.7 million missed their second shot for measles, setting back the global initiative to eradicate the virus

WHO director general Dr Tedros Adhanom Ghebreyesus said: ‘The paradox of the pandemic is that while vaccines against Covid were developed in record time and deployed in the largest vaccination campaign in history, routine immunization programs were badly disrupted, and millions of kids missed out on life-saving vaccinations against deadly diseases like measles.’

He added: ‘Getting immunization programmes back on track is absolutely critical. Behind every statistic in this report is a child at risk of a preventable disease.’

About 90.8 per cent of Americans have got their vaccinations against measles, estimates from the CDC suggest.

This is just above the WHO’s recommendation of at least 90 per cent of the population in order to avoid a large outbreak.

But in several states, however, rates are already below this benchmark.

There was a rise in the anti-vaxx movement before Covid but the push to get everyone vaccinated against that virus has fueled the problem.

Conspiracy theories and fake news about vaccines were proliferated on social media throughout the pandemic, gaining more traction than ever before.

Skepticism about the Covid vaccines is believed to have eroded confidence in other traditional jabs.

A total of 22 countries suffered outbreaks.

The decline in vaccine coverage has meant that ‘measles is an imminent threat in every region of the world’, the WHO and CDC report said.

WHAT IS MEASLES, WHAT ARE THE SYMPTOMS AND HOW CAN YOU CATCH IT?

Measles is a highly contagious viral infection that spreads easily from an infected person by coughing, sneezing or even just breathing.

Symptoms develop between six and 19 days after infection, and include a runny nose, cough, sore eyes, a fever and a rash.

The rash appears as red and blotchy marks on the hairline that travel down over several days, turning brown and eventually fading.

Some children complain of disliking bright lights or develop white spots with red backgrounds on their tongue.

In one in 15 cases, measles can cause life-threatening complications including pneumonia, convulsions and encephalitis.

‘[It] can cause encephalitis which is inflammation of the brain.

‘Encephalitis can result in death or disability.’

Measles can be prevented by receiving two vaccinations, the first at 13 months old and the second at three years and four months to five years old.