Lake Mead’s receding waters revealed long-lost bodies. But who are they? | Climate crisis 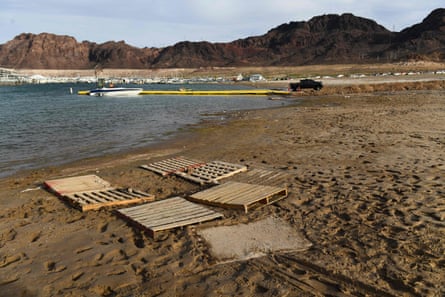 The first sets of human remains that surfaced at Lake Mead appeared in quick succession, one after another.

The environmental disaster unfolding at the largest reservoir in the US was already hard to ignore – there was the giant “bathtub ring” that served as a reminder of the punishing drought in the west and diminishing recreation opportunities. But the bodies were a grim new sign of the crisis.

As water levels fell from May to October to historic lows, eerie discoveries made their way to the surface. At least five sets of remains were found around the lake. A couple who were boating came across a body inside a barrel near a harbor. Less than a week later, two sisters on paddleboards found a jawbone in the sand. In July, a family out for a picnic discovered partial skeletal remains encased in mud along the shoreline.

Now officials are undertaking an exhaustive mission to identify the dead.

Since the first set of remains surfaced last spring, a team of investigators, medical examiners, support staff and consultants have been working to provide answers to the cases that have gripped people around the world.

“We try to identify these individuals through every possible effort we can put forward,” said Melanie Rouse, the Clark county coroner.

Their work isn’t easy. Some of the bodies were underwater for decades, leaving just skeletal remains – the first set of which dates to as early as the 1970s. The years that have passed make figuring out who the bones belong to and what happened even more difficult.

The first case involved a victim who was shot and placed in a barrel, a homicide. But in other instances, such as drownings, it’s all but impossible to establish the cause and manner of death. Officials have publicly identified one person, a man who is believed to have drowned but whose cause of death was deemed undetermined, and continue to work on the other cases.

“Anytime there is a delay from the time of death to the time of recovery it becomes increasingly challenging,” Rouse said.

On a Sunday afternoon in May, boaters returning to the dock after enjoying the blue waters of Lake Mead heard a scream from the beach. Investigating further, they came across a corroded metal barrel stuck in the mud near a popular boat ramp. Inside they could see clothing, a shirt and belt, and what they eventually realized were human remains.

Officials were able to determine, due to the clothes and sneakers still intact, they belonged to a man who was shot between the mid-1970s and the early 1980s. The barrel was partly encased in mud, but at the time it was dropped in the water the lake was much higher, and it had nested roughly 100ft underwater and a few hundred yards from shore.

The local mob museum described the killing as having all the “makings of a gangland hit” because the victim was shot in the head, execution-style, and crammed into the drum – which they say was historically a mob method for disposing of bodies.

That case, and the subsequent remains recovered from the lake, generally spotted by families enjoying a day at the water, fueled wide-ranging fascination. The cases don’t necessarily share anything in common, other than the environmental crisis exposing them, a fact that has sometimes been lost, said Michael Green, a history professor at the University of Nevada, Las Vegas.

“Organized crime is an interesting and important topic anywhere, but Las Vegas has such an association with the subject that just makes it even more fascinating, and then throw in the whole notion of finding human remains, people get interested,” Green said. “Not enough attention is being paid to the fact that this symbolizes the lake has dropped precipitously and dangerously.”

The barrel was exposed due to a drought that has gripped the region for nearly two decades. A grueling dry spell in the Colorado River basin, coupled with overextraction, extreme heat and decreased snowmelt, has depleted the lake, drying out tributaries, threatening hydropower production and closing boat ramps.

The lake, a crucial water source for 25 million people, is just 26% full and at its lowest level since the time it was first filled in 1937. The falling water levels have uncovered large swaths of Lake Mead, revealing old settlements and long-lost relics – including a second world war-era boat – in addition to the bodies.

The process of identification

The Clark county coroner’s work starts at the shore of the busy lake, which received more than 7 million visitors last year. Investigators collect any items they can, Rouse said, and try to glean details from things like clothing and the body itself, including any identifying features.

The process is the same with skeletal remains – like the four other sets recovered from the lake this year – but it’s more difficult because there aren’t necessarily key physical identifiers, Rouse said.

Once the scene investigation is complete, officials bring the remains into the coroner’s office where there is a medical assessment, which can include an autopsy, radiographs and in some cases consultations with forensic dentists, forensic anthropologists and specialty radiologists. Along the way, investigators attempt to collect DNA that can be used to identify the remains. But all that work still requires a missing persons report so authorities have someone to compare the data with.

Then investigators still have to try to determine what happened to the people whose remains were found. The Clark county coroner’s office routinely deals with bodies recovered from extreme conditions – deserts, mountains and bodies of water such as the lake – and each terrain comes with its own set of challenges.

Bodies left in water can be exposed to various scavengers, and the currents can carry different parts of the body away, said Jennifer Byrnes, a forensic anthropologist and professor at the University of Nevada, Las Vegas, who has worked with the coroner’s office.

“People could have gone missing upriver and then their bodies were initially deposited as their final resting place within the lake,” Byrnes said.

But even once the remains are identified, determining a cause of death isn’t always possible when only a skeleton is left behind. “Unless you have some kind of trauma … bones are not as informative as a full body when you have soft tissue and organs and skin,” Byrnes said.

The coroner’s office team has successfully identified one set of remains – those of Thomas Erndt, a 42-year-old who disappeared in the water while taking his family on a midnight cruise on the lake in 2002. He is believed to have drowned, but the cause and manner of Erndt’s death is undetermined.

His family has expressed gratitude for the long-awaited recovery and identification of his remains, and said they finally have closure after two decades.

“That’s one of the reasons why we continue to do what we do – being able to provide closure and being able to return these unidentified individuals back to their families and provide them with a name,” Rouse said.

With the water system in peril, the lake is expected to continue its drop, bringing more finds to the surface. Those who have closely watched Lake Mead hope to see greater focus on the crisis driving the discoveries.

“It’s a huge body of water that’s disappearing at a rapid rate so I would not be surprised [to see more],” Byrnes, the forensic anthropologist said. “The entire world is in trouble, and it’s weird that most people are focusing on the bodies themselves instead of the situation we’re in.”

Gucci & Paris Fashion Week: How my dyslexia made me an artist