XBB.1.5 — a spin-off of Omicron — is thought to be the most transmissible strain yet, having surged to prominence in the US in recent weeks.

UK Health Security Agency (UKHSA) experts claimed the strain, which made up 4.5 per cent of all cases between Boxing Day and New Year’s Day, is one of two variants ‘most likely to predominate in the UK’.

The emergence of the two sub-strains, alongside the unfolding NHS crisis and a ‘flu-nami’, has triggered calls for the return of pandemic-era restrictions like masks and WFH in a bid to ease pressure on the ailing health service. 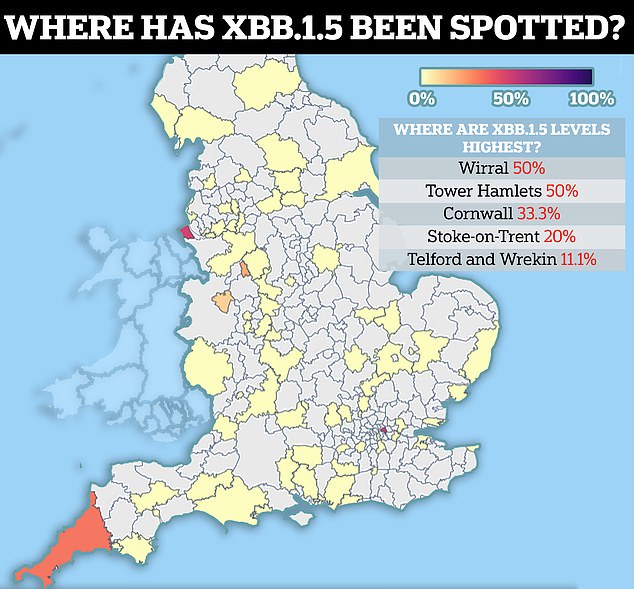 Covid cases are estimated to have doubled during December, just as the XBB.1.5 ‘Kraken’ variant began to sweep Britain. Analysts say almost three million people had the virus in the festive week

Previous figures from the Sanger Institute, one of the UK’s largest Covid surveillance centres, shows 4 per cent of cases in the week to December 17 were caused by XBB.1.5 (shown in purple, bottom right corner)

The warning comes despite experts this week claiming fears about the ‘Kraken’ Covid variant might be overblown.

But health chiefs warn that while the prevalence of XBB.1.5 is low, estimates are uncertain.

While CH.1.1 is behind more infections, XBB.1.5 appears to be growing faster and is thought to be more transmissible and immune evasive than other strains in circulation, experts say.

BQ.1, an Omicron sub-variant and ancestral strain of XBB, has been dominant over the winter and remains behind the majority of infections (51.3 per cent).

But UKHSA data shows that XBB.1.5 has a 39 per cent growth rate advantage over the strain, while CH.1.1 is spreading 22 per cent faster than the dominant variant.

Writing in a technical briefing, UKHSA experts said: ‘CH.1.1 and XBB.1.5 are currently the variants most likely to predominate in the UK following BQ.1, unless further novel variants arise.

‘It is plausible that XBB.1.5 will cause an increase in incidence after the current wave, however it is currently too early to confirm this trajectory.’

Dr Meera Chand, director of clinical and emerging infections at the UKHSA, said: ‘Through our genomic surveillance we continue to see evolution of variants in the Omicron family.

‘UKHSA is constantly monitoring the situation and working to understand the implications for public health.

‘Vaccination remains our best defence against future Covid waves, so it is still as important as ever that people come forward and take up all the doses for which they are eligible as soon as possible.’

The ‘Orthrus’ strain was deemed an official variant by the UKHSA in December, while ‘Kraken’ has been tracked more carefully since Monday.

CH.1.1 has mutations including P681R — which was also on the Delta variant — and is thought to make it better attack cells and cause more severe illness.

Scientists have also spotted R346T, which is thought to help the strain fight-off antibodies that were generated in response to vaccination or previous infection. 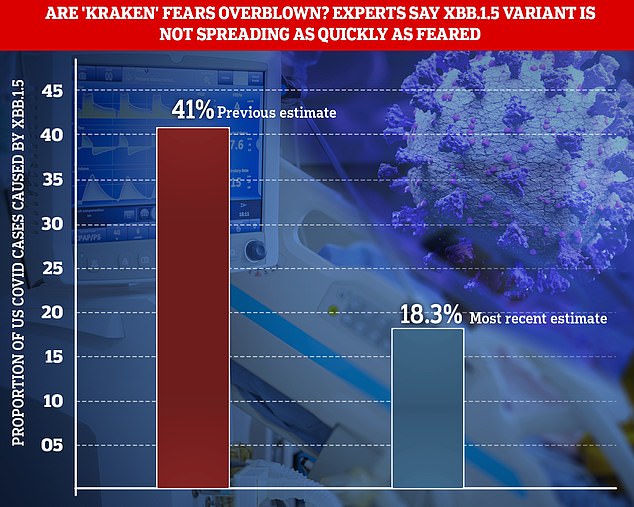 XBB.1.5 — a spin-off of Omicron — is thought to be the most transmissible strain yet. But the Centers for Disease Control and Prevention (CDC), the American agency in charge of tackling the virus, has now downgraded its estimates of how many infections are being caused by the variant (from 41 per cent to 18 per cent in the week to December 31

XBB.1.5 has gained F486P, which helps it to bypass Covid-fighting antibodies. Another change — S486P — is thought to improve its ability to bind to cells.

The UKHSA said: ‘The growth advantage associated with XBB.1.5. is biologically plausible given the combination of immune escape properties and ACE-2 affinity that are expected based on available laboratory data.’

XBB.1.5’s emergence stoked concerns that it was getting through vaccine-induced immunity after it triggered a ‘stunning increase’ in cases in the US, where it was first detected.

But the Centers for Disease Control and Prevention (CDC), the American agency in charge of tackling the virus, has now downgraded its estimates of how many infections are being caused by the variant in the week to December 31 from 41 per cent to 18 per cent.

Professor Paul Hunter, a public health expert at the University of East Anglia, told MailOnline that CDC’s estimate of XBB.1.5’s growth rate was likely too high.

He admitted it was ‘still growing’ but insisted the situation is a ‘lot less scary than it seemed a few days ago’.

Latest Covid surveillance data from the Office for National Statistics suggests one in 20 people were infected with Covid over the Christmas break.

Analysts say almost three million people had the virus in the festive week, mirroring levels seen during the summer when experts wanted the return of pandemic-era restrictions like masks.

Experts fear XBB.1.5, thought to be the most transmissible yet, will accelerate the UK’s winter wave and put the ailing NHS under even more pressure in the weeks ahead.

The health service is already being hammered by its worst influenza outbreak in a decade, a crisis in emergency care that has seen patients wait days in A&E and ambulances outside of hospital.

Winter pressures have triggered fresh calls for a return of measures to protect the NHS.

Health leaders have urged ill Britons to stay home from work and school to avoid the spread of infections and wear masks if they must go outside when sick.

And some scientists have said advice should go further, with everyone told to work from home, wear masks in crowded places and follow social distancing.

Rishi Sunak leads condemnation of Tory MP who claimed Covid vaccine was ‘the biggest crime against humanity since the Holocaust’: Andrew Bridgen is suspended by party for anti-vaxxer Twitter rant and warned he may have ‘blood on his hands’

How many ambulance workers are striking? And will my area be affected? EVERYTHING you need to know about today’s NHS 999 strike