TWO rare chicks are “lucky to be alive” after being rescued from the exhaust of an A320 aircraft at a St Athan aircraft hangar.

The A320 has been at the Bro Tathan West aerodrome since last August on the runway – and was brought inside Caerdav’s hangar for repairs when engineers spotted two kestrel chicks nesting inside.

Staff sounded the alarm to RSPCA Cymru, and inspector Simon Evans saved the day by carefully securing the chicks and transferring them to Gower Bird Hospital for urgent rehabilitation and care.
Engineer Colin Harrison helped the chicks by removing the APU exhaust clamp and sliding a thin piece of board between the APU rear turbine and exhaust, to prevent the chicks getting trapped.

The RSPCA officer was then able to pull the chicks to safety via a hook, before removing them by hand. 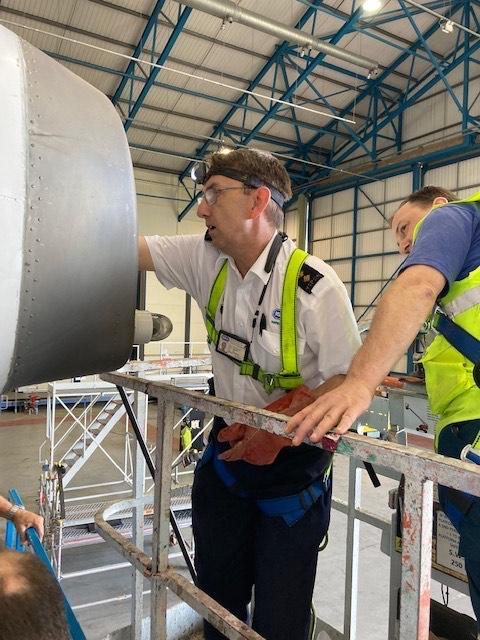 The chicks were very hungry, having not been fed by their mother for a number of days – and the RSPCA believes the birds were rescued just in time.

Kestrels have an amber conservation status in the UK – and the RSPB notes that kestrel numbers declined in the 1970s. There’s approximately 46,000 breeding pairs in the UK, and they live on a diet of small mammals, birds, worms and insects.
The birds have been nicknamed Umit and Lucky – after the two men who first found them.

Inspector Simon said: “These little chicks are lucky to be alive – and we’re so relieved and grateful to the engineers who spotted them and sounded the alarm.

“These chicks were very hungry, and I have no doubt were rescued just in the nick of time, as they hadn’t eaten for a number of days since the aircraft had been moved inside.

“Kestrels are less common than a lot of people think – but rescuing any animal from an aircraft is certainly a new one on me!

“We’re just so very lucky mechanics hadn’t started the aircraft’s engine or this would have ended in disaster.

“The chicks are now in the safe hands of our friends at Gower Bird Hospital. It’s only a short journey west of St. Athan, so there’ll be no jet lag for these lucky kestrels!”

(Picture: RSPCA)
Paul Nash, base maintenance manager at Caerdav, added: “While carrying out maintenance on the A320, two of the Technicians, Umit Atas and Luciano Ferriera, were making their way up the Tail section of the aircraft in a cherry picker, when Umit spotted what looked like two pairs of eyes staring at him from inside the exhaust of the Auxiliary Power Unit (APU).
“On closer inspection Umit saw that the pairs of eyes belonged to two chicks. Others were called to take a look and the guessing began as to what type of birds they were.

“None of the staff thought about kestrels, until we had confirmation from the RSPCA.
“It was a great thing to see but we were conscious of the chicks’ need for water and food, so Umit and Luciano (Lucky), put some water in a bowl and some pieces of cooked chicken in another, in the hope the chicks would feed.

“When checked 15 minutes later the food and water was gone which was a relief to all.
“The rescue caused a lot of interest in the hangar and all were relieved to see the chicks removed without harm. One thing we were all grateful for was that normally we would operate the APU before entering the hangar to carry out function checks – this wasn’t needed otherwise the chicks would have met an untimely and scary end to their short lives.”

To find out more about the RPSCA or donate visit www.rspca.org.uk

Brazil: Why are so many pregnant women dying from Covid?