Instagram is often slammed for creating unrealistic body ideals, but a new study suggests our loved ones are more to blame than celebrities.

In experiments, participants reported levels of satisfaction with their appearance whenever they saw other people’s social media posts throughout the day.

Researchers found engaging with posts by friends and family to be more ‘damaging’ than engaging with content posted by celebs and influencers.

It’s possible that a desirable body image from a famous person is perceived as less attainable, so we worry about it less than if it were from a friend or family member. 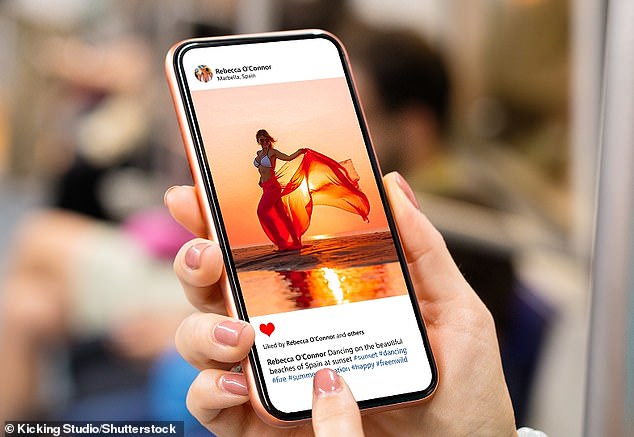 New research has discovered that social media use is associated with lower appearance satisfaction, and engaging with posts by friends and family is more than twice as damaging as looking at content posted by celebrities (file photo)

Social media use is linked to body image concerns and a greater risk of young adults developing eating issues, a 2016 study found.

University of Pittsburgh School of Medicine experts found that all demographic groups were equally affected by the link between social media and eating and body image concerns.

Lead author Jaime E. Sidani said: ‘Social media combines many of the visual aspects of traditional media with the opportunity for social media users to interact and propagate stereotypes that can lead to eating and body image concerns.’

The study was led by academics from Anglia Ruskin University in East Anglia and Karl Landsteiner University of Health Sciences in Austria, and published today in the journal Body Image.

‘Our study found that engaging with social media reduces appearance satisfaction regardless of who is posting the content.

‘Most interestingly, looking at content posted by friends and family had a significantly stronger negative impact on appearance satisfaction compared to content posted by the likes of celebrities and influencers.’

Social media use is increasingly linked with negative body image, but most research to date has involved lab tests or surveys, rather than measuring people’s social media experiences as they occur.

So the researchers recruited 50 adults from Austria and Germany with an average age of 23, who provided feedback throughout each day over a two-week period.

To record the real-time impact of social media activity, participants were made to use a wrist-worn wearable device.

This let them report their levels of satisfaction with their own appearance each time they engaged with social media content over the two weeks. 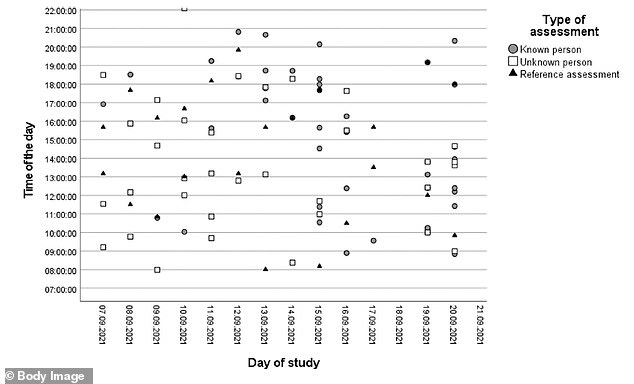 Image shows assessment points for a single participant during the study period and over the time of the day. Participants reported their appearance satisfaction when they saw a known person (e.g. a friend) on social media and when they saw an unknown person (e.g. celebrity) on social media. They also reported appearance satisfaction at two random time-points each day (‘reference assessment’)

Participants were instructed to press a button on the wearable once for seeing content from friends or family peers, and twice for someone they didn’t know in person, such as a celebrity or influencer.

Participants did not specify, however, which particular social media app they were using at a given time.

The study also found that any form of social media engagement was significantly associated with lower appearance satisfaction. 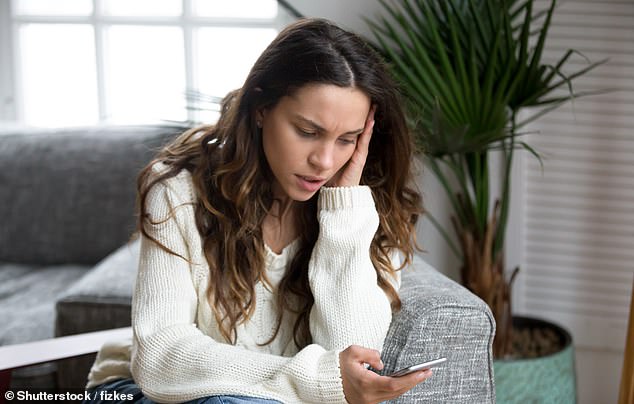 ‘One possible explanation is that people may perceive a post depicting appearance as being much more attainable if it comes from someone they know, adding a layer of expectation or pressure on the person engaging in the post,’ said Professor Swami.

‘At the same time, people may be more critically engaged with posts by the likes of models and celebrities, and therefore perceive the images they share to be more unrealistic.’

The authors say that their results support a growing body of evidence indicating that social media use is robustly associated with ‘negative body image outcomes’.

‘Given these findings, practitioners may consider it meaningful to consider the extent of social media engagement when working to improve body satisfaction in individuals and populations,’ they conclude in their paper.

The study follows other research published this week by the University of Glasgow that found women avoid looking at Instagram images that ‘reflect their own areas of insecurity’.

The Glasgow researchers examined participants’ eye movements as they viewed a range of Instagram images of other women’s faces and bodies, varying in size.

Participants paid more attention to other women’s bodies than their faces, and preferred images of underweight and average women, rather than overweight women.

WE SPEND NEARLY A THIRD OF OUR WAKING HOURS ON OUR SMARTPHONE, RESEARCH SHOWS

People spent a staggering 4.8 hours a day, or nearly a third of their waking hours, on their mobiles last year, research shows.

In the UK, the average amount of time spent on phones per day in 2021 was four hours, less than the global average of 4.8 hours for the year.

Overall, 2021 was ‘record-breaking’ as consumers continue to embrace a mobile lifestyle and move away from big screens, the firm said.

In particular, the use of Chinese video sharing app TikTok saw an increase of 90 per cent globally excluding China, compared to 2020.