How you’re being ripped off by cold and flu medicines

With Britain currently battling the ‘Kraken’, a ‘flu-nami’ and an explosion of other bugs, remedies that promise to banish the sniffles are flying off the shelves.

But there’s no reason to only trust potions made by brands such as Sudafed and Benylin.

Own-brand alternatives sold at Boots, Superdrug and beyond can be exactly the same formula, with them only being cheaper because of different packaging. 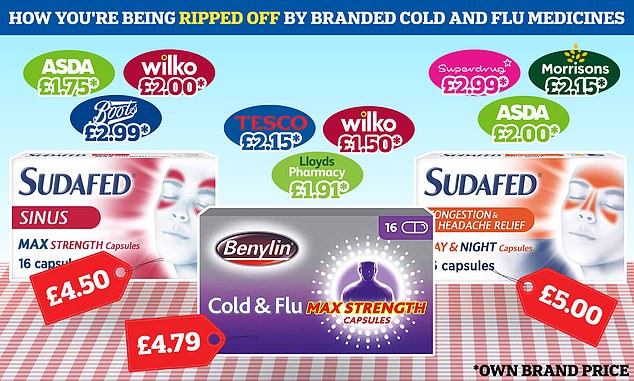 You might only find saviour in potions made by Sudafed, Lemsip, Beechams and Benylin but there’s no reason to turn your nose up at own-brand alternatives sold at Boots and beyond, as some of them are exactly the same formula, with it merely being cheaper because it’s packaged differently

For example, Sudafed’s Congestion & Headache Relief Day & Night capsules, which cost up to £5 in pharmacies, is identical to an Asda own-brand version sold for just £2.

Morrisons, Superdrug and Boots also sell their own versions, charging less than £3.

‘But if you look at the identical PL numbers on the back, you’ll see that it usually has the same ingredients as others, it’s just dressed up in different packaging.

‘The price difference can be astounding, often more than double.’

Every drug authorised for sale in the UK is given a unique product licence number (PL for short).

The digits can be found on the box the medicine comes in, and the leaflet inside. 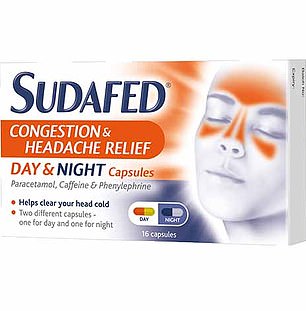 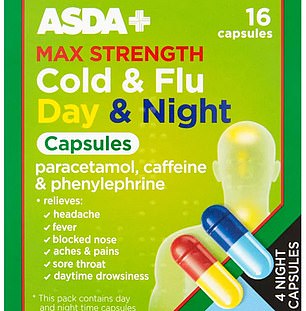 A MailOnline audit found that Sudafed’s Congestion & Headache Relief Day & Night medication, which costs up to £5, was actually identical to an Asda own-brand version sold for just £2

If the PL number matches one found on another product, this means it is an identical drug — with the same active ingredients and formulation — just packaged in a different box.

MailOnline found several examples of branded medications, such as Sudafed and Benylin, actually containing identical active ingredients to some retail own-branded ones, yet costing significantly more.

But you can buy exactly the same product at Wilko for £1.50, under the name Max Strength Cold & Flu Capsules.

This means the Benylin version is three times as expensive.

However this is not a blanket rule, as options at Boots and Superdrug were more expensive than the Beechams version of the same medication.

Boots Ultra Cold & Flu All in One Powder costs £4.49, while Beechams Max Strength All In One Hot Lemon Menthol Sachets is sold for £3.85.

The MoneySavingExpert website, created by Martin Lewis, advises checking PL numbers when buying medication, saying: ‘The pharmaceutical industry’s full of genuine wizards – both those who make the drugs that help, and the marketeers who use a raft of tricks to persuade us there’s hidden magic in their brands.

It adds: ‘It’s important to realise you can often save big by buying an identical pill, just in different packaging. Some tablets are half the price of their doppelgangers.’

Sudafed’s parent company Johnson & Johnson told MailOnline: ‘Our packaging is designed to help consumers easily understand which products may be best for them based on their symptoms.

‘This includes following UK regulations to display active ingredients clearly on the front of the pack. 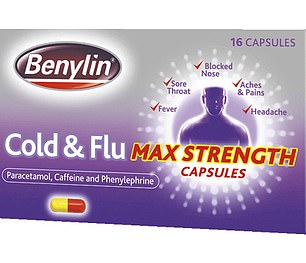 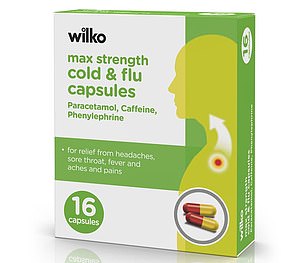 The most stark contrast was seen for Benylin’s Cold & Flu Max Strength Capsules and costs up to £4.79 but you can buy exactly the same product at Wilko for £1.50, under the name Max Strength Cold & Flu Capsules

‘As with any over-the-counter medicine, consumers should always read and follow the instructions provided on the label and patient information leaflet.

‘If consumers have any questions about the appropriate use of any medicine, they should speak to a healthcare professional.’

A spokesperson at Boots said: ‘Boots stocks a very wide range of cough and cold products including Beechams products, but it does not stock this particular Beechams Ultra All In One Hot Lemon Menthol Sachets.

‘The manufacturers have told us that the recommended retail price of the Beechams product is £5.32, compared to our own brand alternative product which we sell for £4.49.

‘We also offer cheaper cough and cold products within our own brand range including other powder sachets from £3.49.’

A Superdrug spokesperson said: ‘We’re committed to offering the best possible value to our customers and we stock a wide range of Superdrug own brand cough and cold products including powder sachets that start at £2.99.

‘Our own brand Flu Max all in One sachets include an expectorant – used to help clear mucus from your airway – which the Beecham product included in this price comparison list does not contain.’

It comes after MailOnline revealed pharmacists are running out of stocks of the most common cold and flu medicines, amid a surge in demand.

As cases of cold and flu continue to rise, those who are unable to see their GPs are turning to shop-bought treatments which has seen a spike in demand, according to an expert.

The ‘higher demand’ has seen medicines like Lemsip and Day and Night Nurse, as well as other own-brand cold and flu treatments, sell out, with pharmacists taking pictures of depleted shelves.

The head of the Association of Independent Multiple Pharmacies, Dr Leyla Hannbeck said the problem was ‘widespread’ and not isolated to just one product.

To make sure you’re not paying more than you should be for cold and flu medication, MailOnline has made a table of which drugs are identical and where you can buy them at the cheapest price.

In other related news…

Kids should be taught ‘not to bother NHS’: Strategy paper demands huge ‘cultural shift’ and says children should learn colds, sore throats and diarrhoea can be treated without unnecessarily going to A&E and GPs

Forget masks… will hated pingdemic and £2bn/month testing also return? MP calls for pandemic-era policies to save ‘broken’ NHS in new Covid wave amid pleas to reopen Nightingales and for ill Brits to WFH and wear coverings

2022 updates to the temperature records