Posted on 8 January 2021 by Guest Author

This article, guest authored by Prof. Angela Gallego-Sala & Dr. Julie Loisel, was originally published on the Carbon Brief website on Dec 21, 2020. It is reposted below in its entirety. Click here to access the original article and comments.

Peatlands are ecosystems unlike any other. Perpetually saturated, their wetland soils are inhospitable to many plants and trees, yet they are rich in carbon.

But the world’s peatlands are under threat on multiple fronts. From a warming climate and rising sea levels through to land-use change and wildfires, disturbing peatland ecosystems risks releasing their long-held carbon into the atmosphere.

In our recent paper, published in Nature Climate Change, we review the scientific literature and survey experts to explore the biggest risks to global peatlands and their potential impacts during this century and beyond.

Why are peatlands so carbon rich?

The key feature of peatlands soils is their saturation. Water excludes oxygen in the soil and plant roots need oxygen to function. This makes peatlands difficult environments for plants to survive.

As a result, high-latitude peatlands are dominated by sedges and mosses, which are well adapted to these “anoxic” conditions. Trees, meanwhile, find it harder to survive.

In tropical peatlands, though, a full canopy can develop above waterlogged peatland soils where trees have found strategies to cope with anoxia. One of these coping mechanisms is “adventitious roots” – roots that hang from branches before reaching the soil to get oxygen. Plants can often find a way to expand even in the most inhospitable of places. 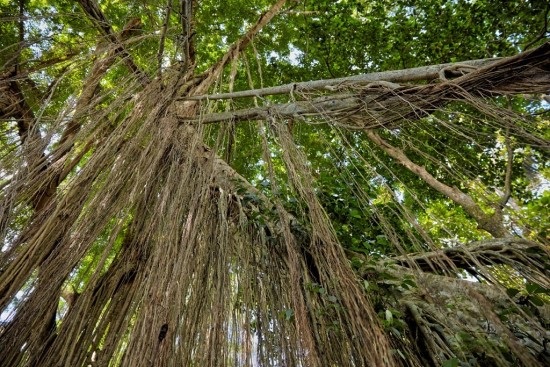 Meanwhile, below ground, the lack of oxygen in the soil slows down all the processes that see microbes break down organic matter. Decomposition without oxygen produces methane, which is why peatlands are natural methane emitters.

CARBON VS. CO2: The terms “carbon” and “CO2″ are often used interchangeably, but there is an important difference. Carbon is an element, while CO2 is a compound containing one carbon atom with two oxygen atoms.… Read More

Ultimately, the slowdown means that the carbon inputs to the soil – from plant photosynthesis – exceed the outputs from decomposition and so carbon accumulates in the soil. In other words, peatlands in pristine state are natural carbon “sinks”, because they take up carbon from the atmosphere.

This slow accumulation of carbon year after year in peatland soils over millennia and all over the world has resulted in deep peat deposits – sometimes over 10 metres in depth.

Overall, global peatlands contain around twice the amount of all the world’s trees put together. And despite only covering 3% of the Earth’s land surface, peatlands store around 25% of the global soil carbon stock. These estimates vary – between around 400bn and 1,000bn tonnes of carbon in total – but the fact is that peatlands are massive carbon stores.

Peatlands have historically been considered unproductive and barren landscapes – even unhealthy and dangerous. This has resulted in a drive to “improve” them – in other words, to drain them and make them into more “productive” landscapes that either provide humans with food or fuel.

Drainage allows oxygen back into the peat soils, leading to fast “aerobic” decomposition. As a result, drained peatlands generally become carbon sources and are also less able to hold water. Approximately 15% of the peatlands worldwide are considered to be in a degraded state – this increases to 80% for UK peatlands.

The draining of peatlands as a management practice neglects to acknowledge all of the ecosystem services they provide. This is not only in terms of carbon sequestration, but also in terms of biodiversity, the provision of water and food, and as culturally important landscapes and records of past environments.

Many people depend on a peatland upstream for their drinking water, for example. It is time to switch our perceptions of peatlands from being desolate, barren spaces to realising they provide multiple benefits for humans and life on Earth.

It is, perhaps, not as easy for humans to appreciate the importance and beauty of peatlands when compared to, say, forests. But most of what goes on in a peatland happens underground and we are unable to see all those processes going on below. This is why the ecosystem has been termed the “Cinderella” ecosystem – as its beauty and benefits hidden for us to discover.

All it may take, however, is to crouch down to more closely inspect a sphagnum moss or a carnivorous plant to fall in love with peatlands. 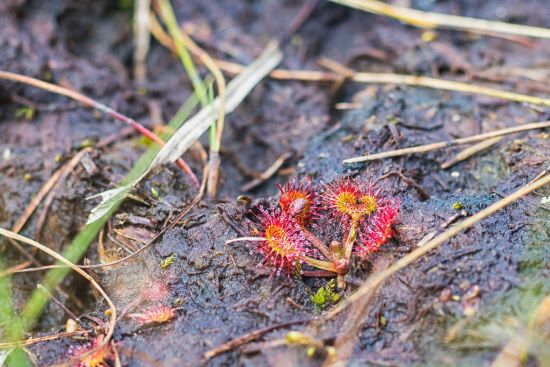 There is still a lot of debate about how peatlands will respond to climate change. Fortunately, there is information stored in the peatland record itself, which we can extract to find out how peatlands have responded to climatic changes in the past.

Each year, as new layers of peat are deposited, the soil captures fragments of evidence on the environmental conditions of the time. These can be in the form of pollen, testate amoeba and carbon and oxygen isotopic ratios. Scientists can drill and extract a core through the soil to retrieve a timeline of past peat deposits.

These palaeoclimate studies indicate that high-latitude peatlands will likely increase their sink capacity with warming – that is, they will accumulate carbon more quickly as temperatures increase (assuming they are not degraded).

This would mean they are what we call a “negative feedback” – their response to warming has an effect that reduces further warming.

However, this is possibly only true at high latitudes, where warming will lead to longer growing season lengths and larger carbon inputs from photosynthesis. Microbial decomposition will also increase with warming, but data so far show that plant photosynthesis will increase even more.

This may not be the case in the tropics, although we cannot be sure of this as tropical peatlands are understudied. But our findings suggest that, overall, if peatlands are preserved, they may help us mitigate climate change.

Another issue is how climate will affect peatland distribution. The overall peatland carbon sink will be affected not just by how fast they accumulate carbon, but how expansive these ecosystems are.

Peatland extent will be affected by climate and, more specifically, it will be determined by having sufficient moisture to keep soils saturated. There is uncertainty about how the extent of peatlands will change in the future, but, like many other ecosystems, they are likely to shift their distribution northwards, if enough moisture is available.

Overall, climate change is likely to increase the carbon sink capacity of peatlands, especially at high latitudes, and change peatland distribution in ways we are not able to predict yet, so uncertainty remains.

The future of peatlands

It is not just climate change that will determine the future fate of peatlands. The graphic below shows some of the other agents of change that are also likely to play a role – including land use change, atmospheric pollution and fire. 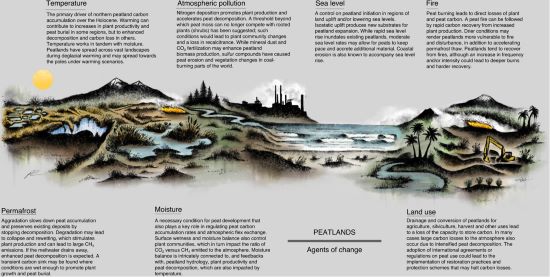 In our recent paper, we gathered the opinion on peatland from experts to examine how the peatland carbon sink has changed during the Holocene (the last ~10,000 years), the Anthropocene (the recent past) and how it is likely to change in the future.

Expert opinions vary, but, overall, they expect that peatlands will shift from an overall carbon sink to a source this century – primarily due to the effect of climate change and human impacts in tropical peatlands.

However, one limiting factor in understanding how peatlands will change is that they are not currently included in the Earth system models (ESMs) that scientists use to make climate change projections.

This is because they generally are not seen as having an important role in the carbon cycle. Partly because peatlands are slow carbon sinks – it takes thousands of years to build up a peatland – but also they have often been considered “inert” carbon stores.

We now know, however, that these large carbon stores are not stable. For example, we have seen large peat fires in southeast Asia, Russia and other boreal areas, such as the UK. We also know that processes such as fire may mobilise peat carbon and release it back to the atmosphere.

We, therefore, need to consider peatlands in ESMs if better predictions of the fate of peatlands and climate change are to be made. 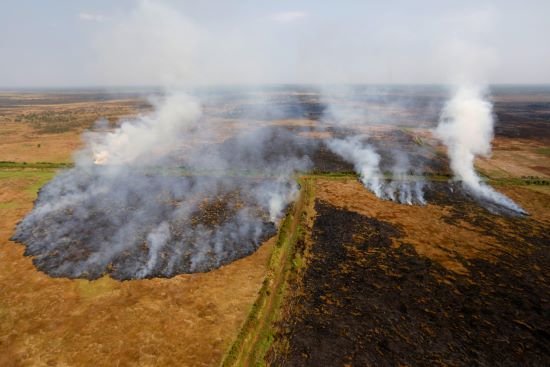 Recently, there has been growing interest among scientists and practitioners into nature-based climate solutions – ways to remove CO2 from the atmosphere through conservation, restoration or improved land management actions.

Research has highlighted the importance of peatlands as a key option. For example, one study estimates that the global greenhouse gas saving potential of peatland restoration – only counting peatlands that are negatively affected by land-use change – is similar to the most optimistic sequestration potential from all agricultural soils. In other words, avoided emissions from peatlands may well be one of the most important natural climate solutions available to us.