Just a fraction of TV medical adverts are for drugs that actually improve your health, a study suggests.

Harvard researchers looked at the most advertised drugs in the US and graded their therapeutic value using ratings from independent health agencies in Canada, France and Germany.

They found less than a third had ‘high therapeutic value’, which means they showed at least moderate improvement in clinical outcomes compared to existing medicines.

They also found more than twice as much money is spent on drugs that are not very useful. 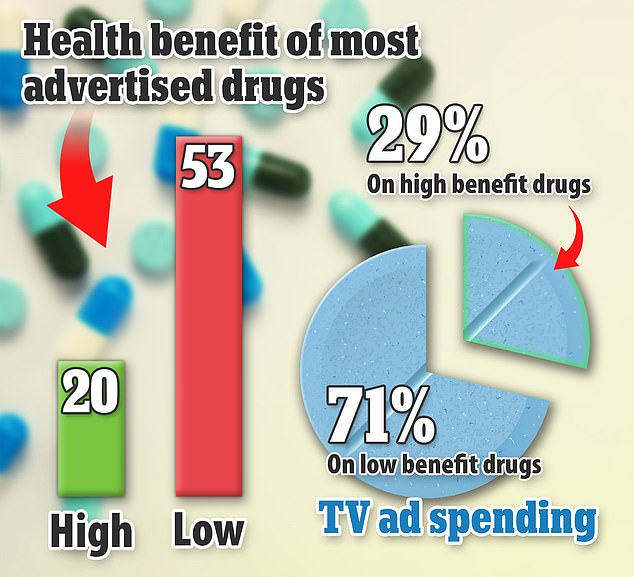 Out of the 73 most advertised drugs in the US the researchers looked at, 53 were found to have a low benefit — despite receiving over 70 percent of TV ad spending between 2015 and 2021. Just 20 of the drugs were categorized as having a high health benefit, and received less than 30 percent of spending

The researchers wrote in the study: ‘Policy makers and regulators could consider limiting direct-to-consumer advertising to drugs with high therapeutic or public health value or requiring standardized disclosure of comparative effectiveness and safety data, but policy changes would likely require industry cooperation or face constitutional challenge.’

Direct-to-consumer drug advertising is a booming market, and has grown almost five-fold from 1997 to 2016.

In 2020, the pharmaceutical industry spent $4.58 billion on advertising on national TV in the US.

Researchers from Harvard’s Brigham and Women’s Hospital collected lists of most-advertised drugs in the US in direct-to-consumer TV ads from an industry publication every month between September 2015 and August 2021.

For each drug, they took therapeutic value ratings from independent health technology assessment agencies in Canada, France and Germany.

Each medicine was given either high or low therapeutic value, depending on its added benefit, safety and strength of evidence, compared to existing drugs.

High therapeutic value was defined as the medicines providing at least moderate improvement in clinical outcomes compared with existing therapies.

The researchers used the most favorable rating at any point since the drug received approval, meaning the proportion of higher-benefit drugs may be overestimated.

Their final list included 73 medicines which had all received at least one therapeutic value rating from an agency.

The Harvard researchers looked at the proportion of frequently advertised drugs that were rated as having a high benefit by any agency, and found that only 20 of them were categorized as having a significant beneficial effect.

They also merged their list with TV advertising data from Kantar Media AdSpender and adjusted for inflation.

The most advertised drugs with the most amount of money spent on them were dulaglutide, for type 2 diabetes, varenicline, to stop smoking, and tofacitinib, for rheumatoid arthritis.

All three drugs were rated as having a low benefit.

A total of $15.9 billion was spent on the 53 drugs rated as low benefit, compared to $6.4 billion on the medicines health agencies deemed to have a high therapeutic value.

The drugs categorized as a high benefit with the most amount of money spent on them were adalimumab, for psoriatic arthritis, sacubitril/valsartan, for heart failure, and pembrolizumab, for lung cancer.

The researchers said that that drugs with significant therapeutic value are more likely to be noticed and prescribed without advertising, meaning manufacturers have more incentive to push drugs with less value.

The study was published in the journal JAMA Network Open.