The 60s was a decade full of eclectic styles and experimental trends.

From mod and hippie styles to haircuts like the bob and mop top, styles developed in the 60s still influence how we look and dress today.

Here’s a look back at some of the most popular hair and fashion trends from the decade.

The Beatles are perhaps the best-known wearers of the mop top. The straight down, ear and forehead-covering haircut was in sharp contrast to the men’s hairstyles that had been popular just a few years before. Instead of the highly stylised looks of Elvis Presley, men started to adopt the messier, rock and roll feel of the mop top.

For many women, the 60s were all about big hair, and came to be defined by the beehive hairdo. Hairstylist Margaret Vinci Heldt invented the look in the United States, and it was made popular by the likes of Jackie Onassis Kennedy, Brigitte Bardot and Dusty Springfield. 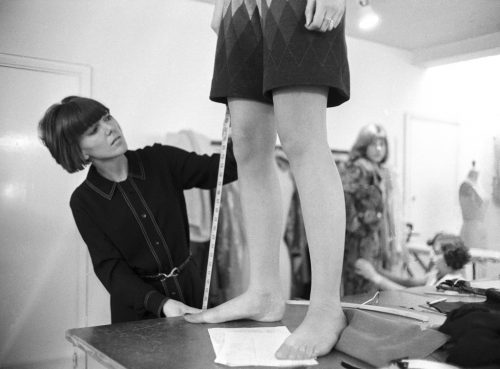 One of the most enduring trends of the 1960s was the mini skirt. Though now it’s seen as an everyday item, when hemlines rose above the knee in the 1960s the look was unmistakably fresh and youthful. Mary Quant is famous for popularising the style in London – her shop on the King’s Road was a must-stop for fashionable shoppers all over the country.

Different ways to wear the headscarf

Though headscarves had already been around for decades, in the 1960s they became a trendy must-have accessory for a whole range of styles. They were tied below the chin or at the back of the neck for a range of different looks, sometimes covering and protecting the hair or functioning as a stylish headband to complement a fashion look.

Coloured and patterned tights were popular

Colourful, patterned tights rose to popularity in the 1960s and became a must-have accessory for young women everywhere. Coupled with the miniskirt of mini dress, they made a bold statement and looked great with the Mary Jane style shoes also popular at the time.

The go-go boot was introduced in the mid 1960s and are a defining element of mod style. They were most commonly white, low-heeled and mid-calf in height. Often also known as the Courreges boot, named after its designer, Andre Courreges.

Vidal Sassoon’s iconic bob was extremely popular in the 1960s, and was worn by everyone from Mia Farrow to Twiggy. It’s defined by the short crop below the ear and often included sharp, angular lines.

Did you sport any of these popular hair and fashion trends? What others did we miss from our list? Share your memories in the comments below!