A professional golfer who was paralyzed from the waist down after a vein burst in his spine has walked again thanks to a rapid surgery.

Luis Vega, 26, from Madrid, Spain, was in the final three days of his vacation to the US when he woke in the night with pain shooting through his back.

He stumbled to the shower clinging to the wall as he went, but collapsed. Just hours later he was unable to sit up or even move his back without being in extreme pain.

Mr Vega, who was staying in New York City, was moved to Mount Sinai West hospital where doctors diagnosed him with spontaneous spinal epidural hematoma (SSEH).

This is when a break in a blood vessel has led blood to collect in the place between the spinal cord and spine bones and form a clot, compressing the cord and leading to paralysis.

Doctors removed the clot during surgery, and straight after he was able to wiggle his toes again. Feeling returned the next day and he was also able to take some steps.

The condition is extremely rare with no known cause. But estimates suggest half of patients suffer long-term damage, and up to five per cent die.

Dr Wesley Bronson, a spine expert who did the surgery, told DailyMail.com that if it had been left beyond 24 hours it was likely he would have faced long-term damage.

Mr Vega said although he was very grateful to be walking again, he was worried about its impact on his golfing career. ‘All my improvement for the last year has been lost,’ he told DailyMail.com.

The professional golfer is expecting to take to the course again next month after rehab. He has previously competed in Spain, Austria and Egypt among others. 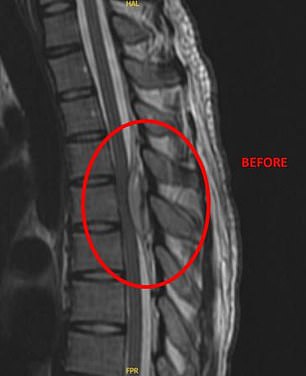 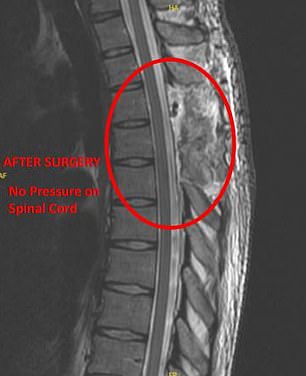 Luis Vega, 26, suffered a burst vein in his spine which led to a blood clot that compressed his spinal cord (left), leading to paralysis and loss of feeling in his legs. Doctors performed an operation to remove the blood clot (right). 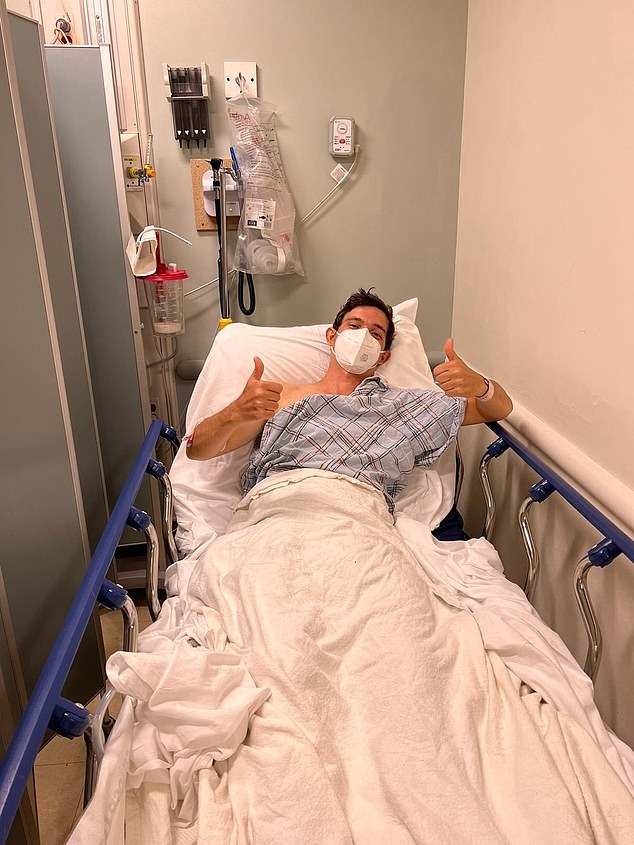 Mr Vega was in hospital at Mount Sinai West, New York City, for ten days. He said straight after the operation he could wiggle his toes and slightly move his legs. By the next day he could walk backwards two steps and sit in a chair 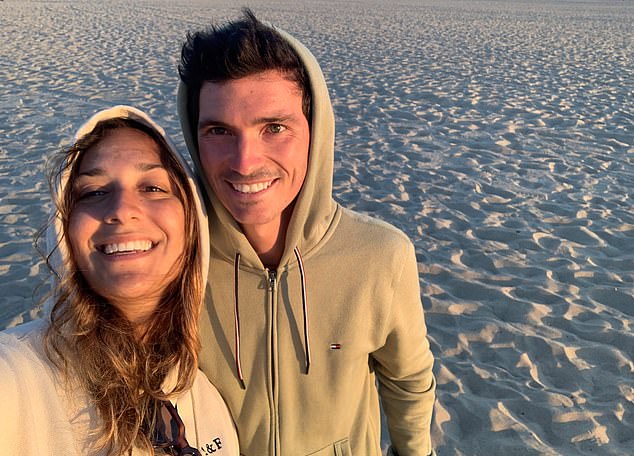 Mr Vega is pictured above with his girlfriend Claudia Rebesco, 27, a physiotherapist. The couple live in Italy and were on holiday in the United States when the condition erupted

The condition is triggered when a blood vessel ruptures, causing blood to leak into the epidural space — a gap between the spinal cord and spine bones — and clot.

This then exerts pressure on the spine, leading to problems with it transmitting signals to the rest of the body.

Patients initially face sudden neck or back pain, which then progresses to near or total paralysis of the legs or arms — depending where the clot is.

What is a spontaneous spinal epidural hematoma?

A spontaneous spinal epidural hematoma (SSEH) is when a burst vein leads to bleeding in the spine.

Blood flows into the epidural space — area between the spinal cord and spin bones — where it solidifies into a clot.

This then puts pressure on the spine, triggering symptoms.

But later this progresses to a near or total paralysis of the legs and/or arms.

If it is not treated quickly, the blockage can cut off the blood supply to the spinal cord.

This leads to a spinal stroke — where neurological cells begin to die because they are starved of oxygen.

The condition is very rare, and about half of patients suffer long-term damage. Five per cent die.

It is not clear what causes the condition, but it may be linked to past trauma or surgery.

Treatment involves cutting open the spine by removing part of a vertebrae and taking out the blood clot.

If they don’t act quickly patients can suffer a spinal stroke, when the blood supply is cut off from the spinal cord leading cells to start to die. This causes permanent damage.

There is no known cause for the condition, although it may be triggered by trauma, an underlying condition or even lifting too heavy weights in the gym.

Doctors underlined, however, that it is extremely rare with less than one per son per million suffering it annually.

Mr Vega is from Madrid, Spain, but now lives in Italy with his girlfriend Claudia Rebesco, 27, a physiotherapist.

The couple were on a month-long holiday to the US that began with a wedding in South Carolina before visiting several other US cities including Los Angeles and Miami.

But on their final stop in New York City and three days before their flight home Mr Vega suddenly suffered spinal pain.

On August 7 he woke up at 2am with a stinging headache.

He stumbled to the shower, but needed to use the wall to hold himself up and struggled to move his legs.

Once under the showerhead the pain became so much that he collapsed on the floor.

Ms Rebesco helped him back to bed, and when he lay down the pain disappeared.

But as soon as he sat up or moved his back the shooting pain started again.

He stopped being able to move anything below his waist — paralysis — and lost all feeling in the area.

The couple tried breathing exercises, but after the pain refused to subside they called an ambulance.

In hospital by 11.30am he went through MRI scans where doctors diagnosed a blood clot in his spine.

He was sent for an emergency laminectomy — a particular type of surgery where doctors remove a blood clot from the spine.

After putting him under anesthetic, they cut an incision over the mid area of his back — where the affected vertebrae was — and moved muscle to one side.

They then cut off the bone protecting the spinal cord — medically termed the lamina — and removed the blood clot.

By the time he came around that evening, Mr Vega already had some feeling back and could wiggle his toes and slightly shift his legs.

By the next morning he was able to stand again, take two steps backwards and sit in a chair as normal.

Doctors kept him on the wards for another eight days to monitor his recovery.

He was then allowed to return home, where he has received physical therapy to get him back playing golf. 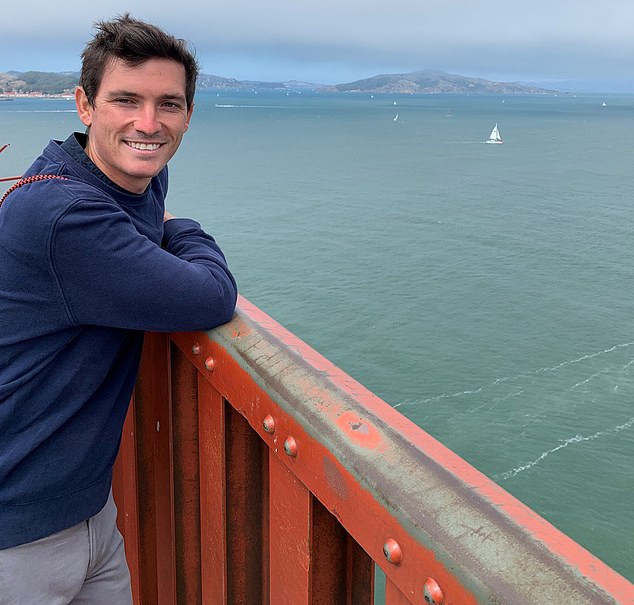 Mr Vega is currently going through physical therapy. He is hoping to start training for golfing tournaments again next month 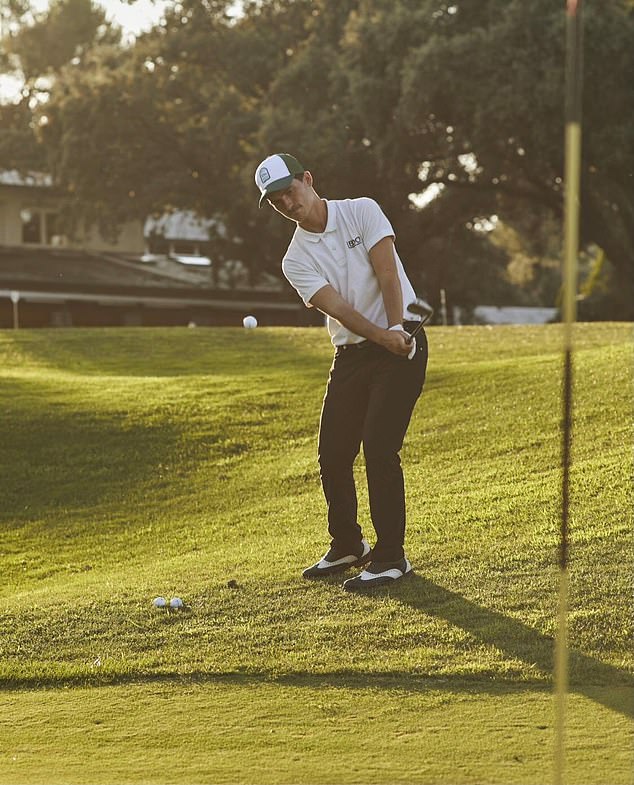 He has competed in Egypt, Spain, Italy and Austria — among a host of other countries

The couple had travel insurance, ensuring they did not have to fork out any savings for the operation or recovery.

Speaking about his condition, Mr Vega told DailyMail.com: ‘I felt for me it was like two different thoughts because on the one side I was really happy I was able to walk again, practice again and play again after some months of rehab.

‘But on the other side I was supposed to arrive [to Italy] on the 10th and do a really good end of season with a new coach and new personal trainer.

‘All my improvement for the last year has been lost.’

Dr Bronson told DailyMail.com that the condition was ‘very, very rare’, and in Mr Vega’s case it was not clear what had caused it.

‘He didn’t have any of the risk factors for it, no trauma, injuries — just a normal young healthy individual.

‘It does sometimes happen in bodybuilders where they lift very heavy weights, but this wasn’t the case with him either.

‘We have no idea why it happened, other than really bad luck’.

He told DailyMail.com that if they hadn’t managed to operate on him within 24 hours of the serious pain developing, he would have likely suffered permanent damage.

Mr Vega says he hopes to start training again next month, and prepare for some more tournaments.

He is currently involved with the Alps Tour, which runs youth golfing tournaments across five European countries.