Tuberculosis diagnoses have risen year-on-year for the first time in two decades, a World Health Organization report has found.

The global health agency reported that 10.6 million people were confirmed to have TB in 2021, an increase of 4.5 per cent from the year previous year.

The increase – which coincides with the rise of a drug-resistant strain of the infection – reverses years of decline between 2005 and 2019.

The WHO said about 450,000 cases involved people infected with antibiotic-resistant TB, 3 per cent more than in 2020.

The resurgence of TB in 2021 is believed to be the result of fewer cases being diagnosed in 2020 during Covid lockdowns and hospital restrictions.

The pandemic ‘continues to have a damaging impact on access to TB diagnosis and treatment’, the report said.

‘Progress made in the years up to 2019 has slowed, stalled or reversed, and global TB targets are off track,’ it added. 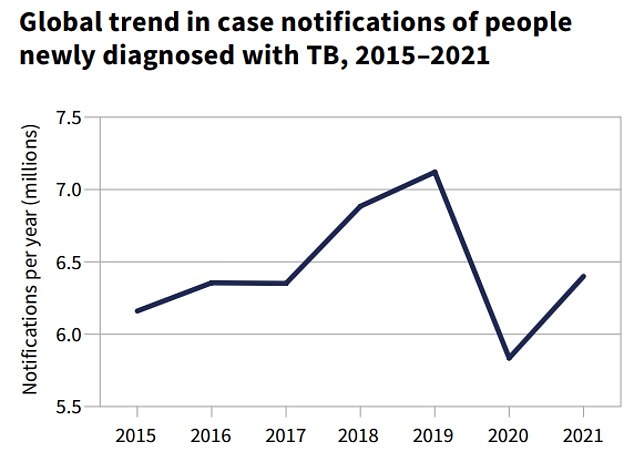 WHO said an immediate impact of the pandemic on TB was a large global fall in the number of people newly diagnosed with TB and reported (i.e. officially notified) in 2020, compared with 2019 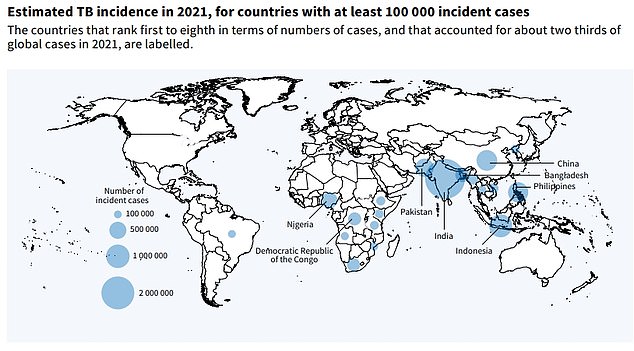 TB mostly affects adults, especially those who are malnourished, HIV-positive, or have other conditions and about 95 per cent of cases are reported in developing countries 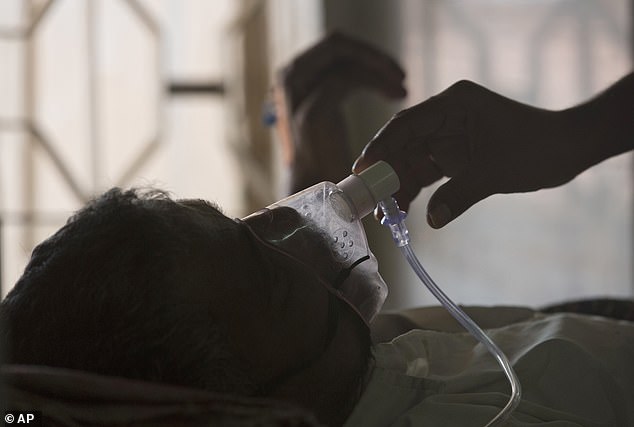 The estimated number of deaths from TB increased between 2019 and 2021, reversing years of decline between 2005 and 2019

With fewer people being diagnosed with the highly infectious disease in 2020, more of them may have unknowingly spread it to other people, the WHO warned.

Tuberculosis (TB) is a bacterial infection spread between people by coughing and sneezing.

The infection usually affects the lungs but the bacteria can cause problems in any part of the body, including the abdomen, glands, bones and the nervous system.

TB infection causes symptoms like fever, coughing, night sweats, weight loss, tiredness and fatigue, a loss of appetite and swellings in the neck.

If the immune system fails to contain TB bacteria the infection can take weeks or months to take hold and produce symptoms, and if it is left untreated it can be fatal.

TB is most common in less developed countries in Sub-Saharan and west Africa, southeast Asia, Russia, China and South America.

Officials added that the downturn in the global economy was also a factor, saying that about half of all TB patients and their families face ‘catastrophic total costs’ due to their treatment.

After COVID-19, TB is the world’s deadliest infectious disease. It is caused by bacteria that attacks the lungs though TB can also affect other parts of your body, including the kidneys, spine or brain.

The bacteria that cause tuberculosis are spread from person to person through tiny droplets in the air released in coughs and sneezes.

TB mostly affects adults, especially those who are malnourished, HIV-positive, or have other conditions. The vast majority of cases, 95 per cent, are reported in developing countries.

Without treatment, roughly half of all TB cases are fatal. Yet only one in three people with drug-resistant TB are receiving treatment, according to the report.

Dr. Hannah Spencer, at TB and HIV specialist with Doctors Without Borders in South Africa said: ‘Drug-resistant TB is curable, but alarmingly, cases are on the rise for the first time in years.’

‘It’s urgent that shorter, safer and more effective treatments are scaled up now,’ she added.

Dr Spencer called for lowering the cost of TB medicine so that a typical treatment course costs no more than $500.

Ukraine had one of the world’s worst TB epidemics even before Russia invaded the country in February. Health experts fear the inability of patients to get treated could fuel the rise of more drug-resistant TB across the region.

While TB patients displaced by the war can seek care in Ukraine, the country has seen a shortage of key medicines and authorities face challenges in keeping track of patients.