The terms ‘women’ and ‘woman’ have been quietly scrubbed from Centers for Disease Control and Prevention (CDC) guidance on flu vaccines during pregnancy.

DailyMail.com found all gender-specific terms — also including ‘she’, ‘her’ and ‘mother’ — were wiped from the CDC webpage when it was updated last August.

They have been replaced by the gender-neutral terms ‘pregnant people’, as well as the pronouns ‘their’ and ‘they’.

The Association of American Physicians and Surgeons (AAPS) said there was ‘no logical scientific reason’, claiming it was ‘clearly a political move’.

It is the latest example of CDC medical advice being de-sexed in an attempt to be more inclusive to trans people. DailyMail.com revealed last month women had also been omitted from monkeypox guidance.

But experts warn using neutral terms in gender-specific health advice muddles messaging — especially for those who are vulnerable or whose first language isn’t English.

Flu vaccines are particularly important for pregnant women, who are at a much higher risk of severe disease and death. 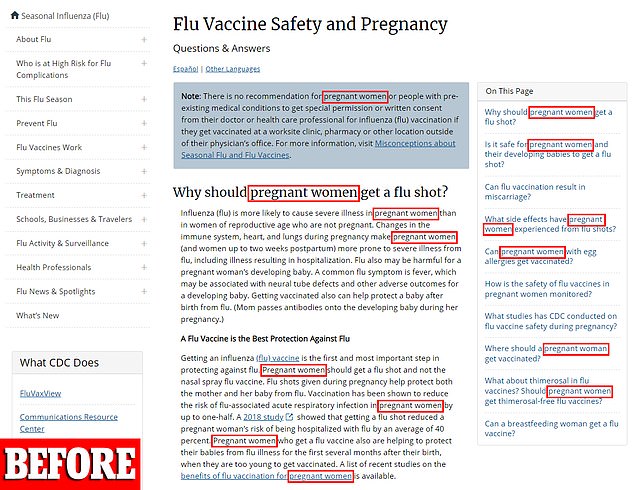 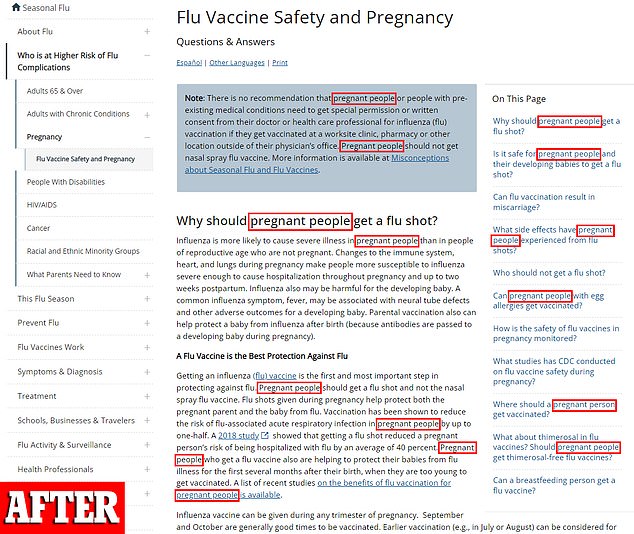 And above is the page shown after it was updated last year. It has scrubbed all mention of the terms pregnant woman or pregnant women, replacing them with ‘pregnant people’. Mentions of she, her and mother have also been removed

Pregnancy is the term used to describe when a fetus is developing inside a woman’s uterus.

Trans men who were born female can sometimes get pregnant if they choose to keep their womb and reproductive organs.

Being pregnant can weaken the immune system, leaving women more likely to be admitted to hospital if they catch the flu.

IS THE CDC GOING WOKE?

The agency has come under fire several times in recent months for using gender-neutral language.

Aug 11, 2021: CDC director Rochelle Walensky says all ‘pregnant people or people who are thinking about becoming pregnant’ should get the Covid vaccine.

She also urged those who were breastfeeding to come forward.

July 1, 2022: The agency warned ‘people who are pregnant or recently pregnant’ are at a greater risk of severe Covid infection than ‘non-pregnant people’.

Autumn 2022: The agency’s guidance for the annual flu shot encourages ‘pregnant people (and people up to two weeks postpartum)’ to get their shot.

October 31, 2022: It’s revealed that the agency has updated guidance on getting the flu shot in pregnancy to remove the words ‘woman’ or ‘women’. They were replaced with ‘people’.

The infection has also been linked to premature births and defects, making a flu vaccine essential for expectant mothers.

The CDC page used to include 56 mentions of gender-neutral terms.

The introductory paragraph used to say the flu is ‘more likely to cause severe illness in pregnant women than women of reproductive age who are not pregnant.

But the new description, updated around August 30, 2021, reads: ‘Influenza is more likely to cause severe illness in pregnant people than in people of reproductive age who are not pregnant.’

Dr Jane Orient, executive director of the right-leaning AAPS told DailyMail.com that the update was ‘absurd’.

‘There is no logical scientific reason to say this, it is clearly a political move,’ she said.

She warned that not giving a patient’s biological gender raised the risk of them receiving inappropriate care.

‘There is a medical risk in misrepresenting in a physiological situation,’ she said.

‘A person who claims to be a man but has female organs needs to have those parts of their body treated appropriately.

‘If he goes to the gynecological service, he is not dealing with a physician trained in how to deal with male problems.’

Dr Orient said that the CDC likely shifted its guidance to include women who were now identifying as men.

But she warned these individuals would still need to end up on maternity wards because they are ‘nevertheless a woman’ in the biological women.

Supporters of updating guidance so it is not gendered say this ensures it includes ‘everyone’.

The advocate and co-founder of Australia-based Transgender Victoria, Sally Goldner, previoulsy said: ‘It’s important that we represent everyone.

‘The “standard cis-gender woman” will still be able to get the messages, but then we can add in the messages we need for other groups,’ she said.