American nurses were today accused of ‘failing children’ after calling for all restrictions on sex changes to be lifted.

The American Nursing Association said it ‘strongly opposes’ any policies that limit access to trans healthcare in a statement issued Wednesday.

It is the latest medical membership body to throw its weight behind the controversial treatments. The American Medical Association and the American Academy of Pediatrics have also spoken out against restricting gender-affirming care in minors.

Several Republican states are imposing age limits or tightening access to puberty blockers or surgery as the procedures become increasingly common and a growing number of ‘de-transitioners’ say they regret the irreversible procedures.

But the influential ANA, which has four million members, said the restrictions are ‘not grounded in reputable science’.

Critics have blasted the ANA for what they called a ‘grotesque politicization’ of medicine.

They said doctors and nurses should instead be ‘cautious’ about trans treatments, which are often irreversible, in young people.

Jay Richards, from the right-wing Heritage Foundation, told DailyMail.com: ‘I absolutely think the ANA is failing children with this statement.

‘It does not cite any scientific evidence, it is a piece of political advocacy that I honestly suspect is the product of a small group of people in the organization who are advocates.’ 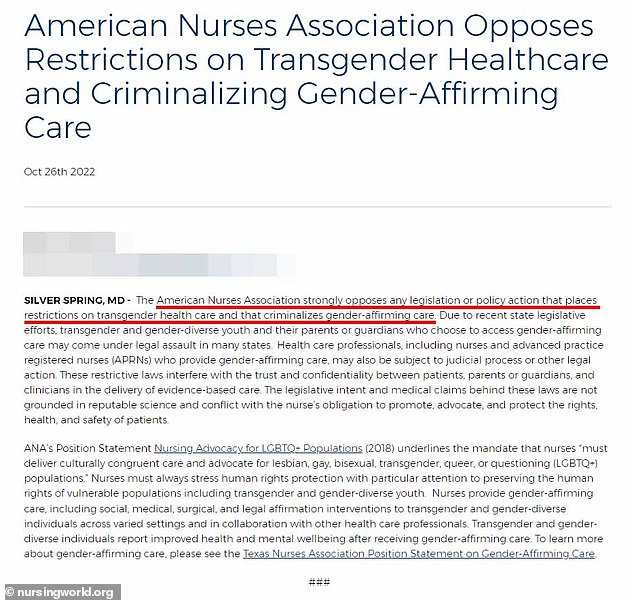 Pictured above is the statement from the American Nurses Association. Critics have slammed them for ‘politicizing’ the issue and ‘failing’ children 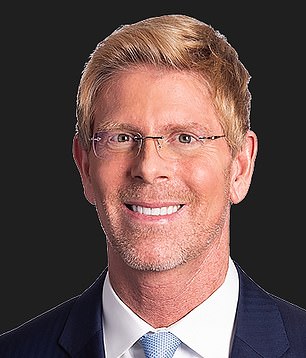 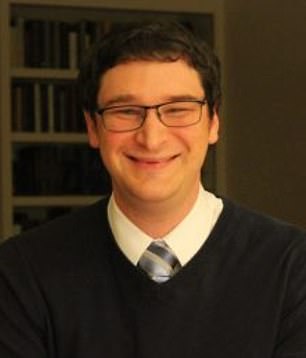 Jay Richards, a director focusing on gender ideology at the right-wing Heritage Foundation, said the ANA’s statement was politically motivated and not backed up by scientific evidence. Patrick Brown, a fellow at the Ethics and Public Policy Center said it was important to be ‘cautious’ when it came to transgender care

Mr Richards told DailyMail.com that the ANA’S stance ‘does not reflect the opinion of most members of the organization’.

‘Americans should not think that this reflects the views of ordinary nurses,’ he added.

‘I fear that this is a grotesque politicization of an issue that should be decided on steely scientific grounds.’

There are no age limits on transgender treatments at a federal level.

Arizona is currently the only state that has banned transgender surgery before someone’s 18th birthday.

How gender dysphoria rates among children have DOUBLED since 2017

The number of children with gender dysphoria has exploded in recent years, giving rise to the use of powerful puberty-blocking drugs.

That is double the number estimated to be transgender in 2017 in a previous report by the same researchers, though they used different estimates.

Connecticut and New York saw the numbers of children identifying as transgender in their states nearly quadruple over the last three years alone. The population only fell in West Virginia, Tennessee and New Jersey.

Some say the rise is born out of increased awareness of gender dysphoria — that is, emotional distress due to a disconnect between gender identity and biological sex — and a rise in acceptance in society.

Alabama and Arkansas imposed more wide-reaching bans that also stopped under-18s accessing puberty blockers and hormone therapy, but these have been suspended.

More than ten states — including Florida, Alabama and Texas — block Medicaid from funding any transgender care.

There are fears about the long-term impacts of the life-altering drugs and procedures.

More and more people are now coming forward to say they regret transitioning.

Just yesterday Chloe Cole, 18, came forward to say advocating for the care is like ‘trying to adovcate for further experimentation on children’.

She was allowed to transition to a boy at age 13 years, before later regretting her decision at age 16 years.

President Joe Biden said this week that ‘it’s wrong’ to limit access to the treatments, even in children.

Generally hormone therapy is not offered until someone is 16 years old, the Mayo Clinic says, in line with recommendations from the Endocrine Society.

But a study published earlier this week found children as young as 14 years are having ‘top’ surgery — where breasts are removed or implanted.

It’s unclear how many are having ‘bottom’ surgery on their genitals.

The American Academy of Pediatrics supports transgender surgery but gives no age limits for treatments.

Swedish hospitals have also stopped prescribing puberty blockers to those under 16 years old.

Patrick Brown, a fellow at the Conservative Ethics and Public Policy Center, told DailyMail.com: ‘If you are 14 or 15 years old, you think this will solve your problems in school or other issues.

‘But these are potentially life changing alterations and medication and surgery.

‘I think if we are not stepping back and taking a deep breath and asking for more evidence to come in, it is failing in our responsibility as a society to watch out for the interests of young people.

‘Whenever you are talking about changing someone’s life in such a dramatic way you wnat to be extremely cautious.

Gender dysphoria is is when someone’s personal gender does not match that of the body they are born into.

This medication is only approved by the Food and Drug Administration (FDA) for stopping puberty when it starts abnormally early in children. For transgender children it must currently be prescribed off-label.

Youngsters are also able to get hormone therapy, which changes the balance of hormones in their bodies prompting secondary sexual characteristics.

By raising testosterone levels, the drugs can prompt the development of facial hair and a deeper voice.

Boosting levels of estrogen can prompt more rounded hips and a decreased ability to generate muscle.

A study released last year by Stanford University scientists suggest 13 per cent of people who currently identify as transgender want to de-transition.