Unusual lumps, a persistent cough and headaches are the cancer warning signs doctors tell you to watch out for.

But floating poo, excessive sweating and hearing voices are some of the stranger signs tumours give off.

Many of these symptoms are exceptionally common and can be caused by a lot of different conditions.

‘It’s impossible to know them all, which is why it’s important to get your doctor’s advice if you notice anything that’s not normal for you or isn’t going away.

‘It probably won’t be cancer.

‘But if it is, spotting it early means that treatment is more likely to be successful.’ 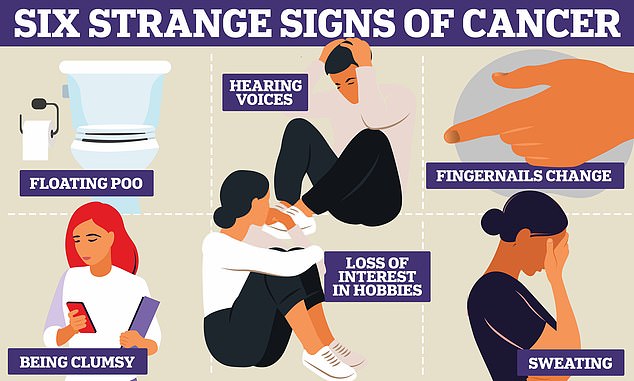 Floating poo, hearing voices, change in fingernail colour, sweating, being clumsy and a loss of interest in hobbies are some of the stranger signs tumours give off. Many of these symptoms are exceptionally common and can be caused by a lot of different conditions

Floating stools may be an early warning sign of pancreatic cancer.

Although it sounds like a strange connection, tumours in the pancreas can block the organ’s ducts — stopping the thorough release of enzymes and bile that break down fatty foods.

Without this internal reaction, poo can end up being greasy and float.

But the symptom is not necessarily pancreatic cancer, a floating stool could also be a sign of cystic fibrosis and coeliac disease.

Pancreatic cancer is the 10th most common cancer in the UK, with more than 10,000 new cases every year, according to Cancer Research. And in the US, 60,000 people are diagnosed each year.

According to the NHS, the main symptoms of the disease include a loss of appetite, feeling tired, a high temperature and yellow skin. 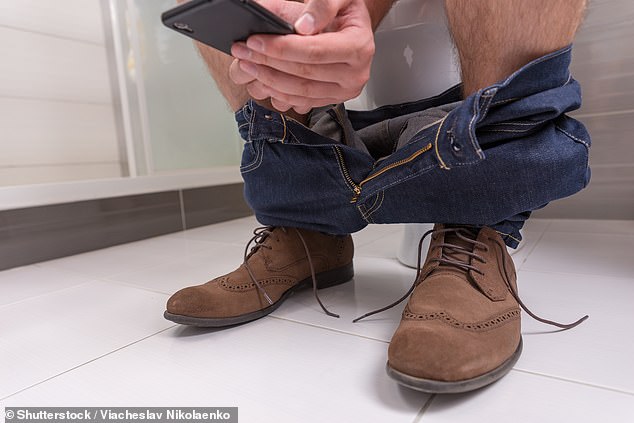 Pancreatic cancer can stop pancreatic enzymes and bile from getting into your intestine to break down fats. Without these enzymes poo can become greasy which makes it float. However, the main symptoms of pancreatic cancer include a loss of appetite, feeling tired, a high temperature and yellow skin

Hearing random sounds, or even actual voices, can be a symptom of a mental health condition.

But it could also be cancer.

Auditory hallucinations, as they are known, can be caused by brain tumours that are both cancerous and benign.

This can happen if the tumour is located in the temporal lobe, the part of the brain that processes sound, understands language and encodes memory.

Hallucinations can also be caused if the tumour presses on a nerve which send signals from the ear to the brain.

The NHS advises anyone who experiences hallucinations that make you see, hear, smell, taste or feel things that appear real but are not, to seek medical help.

Keeping an eye on the colour and shape of your fingernails might just save your life.

Blue, brown or black lines under your nails could be an indication that you have skin cancer.

Elizabeth Misselbrook, a mother from Bracknell, Berkshire, first noticed a suspicious brown mark on her finger in September 2019 and immediately booked an appointment with her GP. 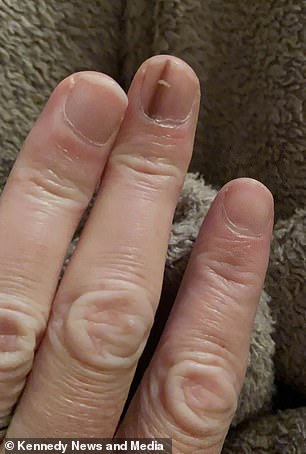 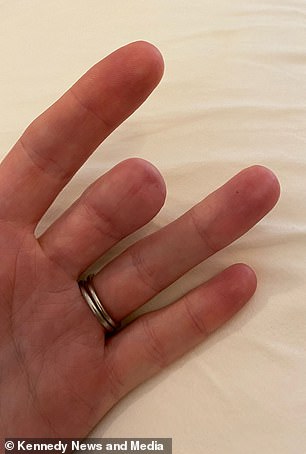 Elizabeth Misselbrook, 40, from Bracknell, Berkshire, had to have her finger chopped off by doctors after they discovered a brown line on her nail was a rare form of skin cancer

A biopsy revealed she had an acral lentiginous subungual melanoma — a rare form of skin cancer that makes up fewer than one per cent of melanoma cases in fair-skinned people.

The percentage is higher in people with darker skin, because they are less at risk of skin cancers linked to sun exposure.

It usually develops on the palms of a person’s hand, the soles of their feet or beneath their nail.

Dropping things, losing your balance and generally just being a bit clumsy is another sign of brain cancer, even though it is commonly associated with dementia.

If a tumour forms on the brain stem, where your brain connects to the spinal cord, it could cause you to become clumsy and have trouble walking, simply because of its location.

Research carried out by King’s College London and led by Dr Suzanne Scott, a senior lecturer in health psychology, revealed just how slight some of the signs of cancer can be.

The study of 39 brain cancer sufferers showed many dismissed their lack of balance as part of getting older.

Some also worried their doctor would think they were ‘silly’ if they went to them complaining of feeling ‘grumpy’ or ‘clumsy’ with no other symptoms. 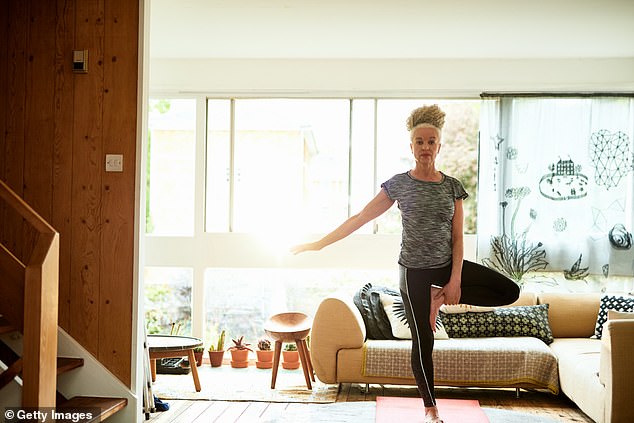 If a tumour forms on the brain stem, where your brain connects to the spinal cord, it could cause you to become clumsy and have trouble walking. A study of 39 brain cancer sufferers showed many dismissed their lack of balance as part of getting older

Loss of interest in hobbies

There are lots of reasons we may give up a hobby, whether it is playing an instrument or being part of a sports team.

But suddenly losing interest in your favourite hobby could also be a sign of brain cancer.

In Dr Scott’s study, brain cancer patients reported being less interested in activities, as well as not caring about their relationships, job and hobbies.

According to the Brain Tumour Charity, as many as one in three people with a brain tumour experience a personality change.

The charity explains that as the tumour grows, it puts pressure on the healthy cells around it.

Personality changes can occur when the tumour is located in the frontal lobe, which controls your emotions and personality.

This part of the brain also regulates behaviour and when tumours develop in this area it can also cause people to act in ways that may be considered to be socially inappropriate.

It is always important to keep an eye out for the warning signs of cancer and to catch symptoms early.

Only 40 per cent of brain cancer patients live more than a year after diagnosis and only 20 per cent survive five years, the authors wrote in the journal PLOS One.

Sweating excessively when it is hot, when you are exercising or ill is normal.

But if you are waking up in a pool of your own sweat, it could be a sign of numerous conditions, including the menopause, anxiety and low blood sugar.

It could also be a sign of cancer, charities say. 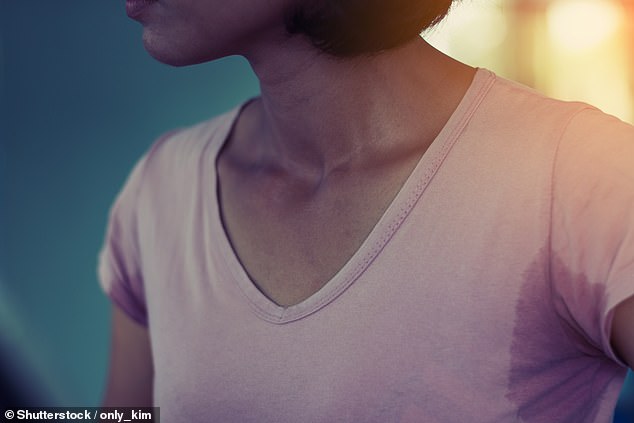 Sweating excessively is a sign of six types of cancer. This less common symptom could be due to a change in hormone levels caused by some cancers

However, sweating is one of the less common symptoms of cancer.

Ms Betts, from Cancer Research UK said: ‘If you notice unusual or persistent changes to your health, do make an appointment with your GP.

‘No matter how weird it might seem or whether or not you think it’s a sign of cancer, your doctor wants to hear from you.’ 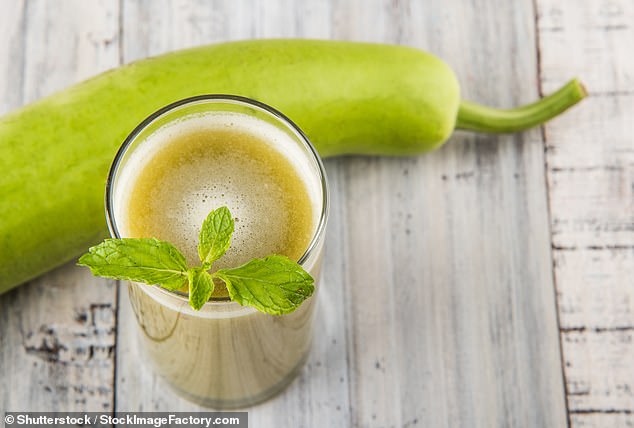