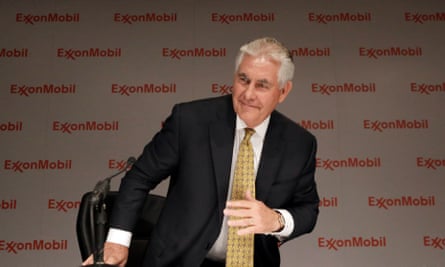 Further revelations of the extent of Exxon’s historical knowledge of the unfolding climate crisis may have deepened the legal peril faced by the oil giant, with several US states suing the company for alleged deception, claiming their cases have now been strengthened.

A research paper published last week found that from the 1970s onwards, Exxon climate scientists “correctly and skillfully” predicted climbing global temperatures, rising by around 0.2C a decade due to the burning of fossil fuels, often matching or surpassing the accuracy of projections by independent outside scientists.

Geoffrey Supran, lead author of the new study, which was gleaned from a trove of internal documents and published scientific papers, said it was “breathtaking” to see Exxon’s projections line up so closely with what subsequently happened.

Despite this knowledge, Exxon executives spent several decades downplaying or denying the climate impact of its business practices, helping stymie action to curb the use of fossil fuels and prevent dangerous global heating. As recently as 2013, Rex Tillerson, then chief executive of Exxon, said climate models were “not competent” and “not that good”.

More than a dozen states and municipalities have launched lawsuits against Exxon, other oil companies and trade associations, claiming that by concealing their awareness of climate change they committed fraud or false advertising. Several Exxon foes now believe their legal pursuit of the company has been bolstered by the latest analysis of its climate science work.

“The study’s findings expand the robust public record of the fossil fuel industry’s deception surrounding their products’ contribution to climate change, and are consistent with what we alleged in our lawsuit,” Matthew Platkin, New Jersey’s attorney general, told the Guardian. “This study only increases our resolve to hold them accountable in court.”

A spokesman for Keith Ellison, the attorney general of Minnesota, said the new research “confirms the need to hold defendants accountable for their deception”.

Several jurisdictions declined to comment on their ongoing cases against Exxon, including Delaware, New York City and Massachusetts, where the state’s supreme court last year dismissed a claim by the company that it was being pursued for political reasons and must face trial over accusations it broke consumer protection laws and deceived investors by covering up its knowledge of the climate crisis.

Exxon has maintained that it has followed the best available science at any given time and has denied lying to the public in order to protect its business model. “I don’t believe companies should lie and I would tell you that we do not do that,” Darren Woods, Exxon’s chief executive, told a congressional hearing in 2021. Woods has said that Exxon now accepts that climate change is real and that it supports the goals of the Paris climate agreement.

The Texas-based oil giant has deep pockets for a protracted legal battle – in October it announced a quarterly profit of nearly $20bn (£16bn), almost matching the earnings of the tech behemoth Apple – and has sought to have challenges tossed out of court or have them heard at the federal, rather than the state, level, in the belief this will lead to a more sympathetic outcome for the company.

But some legal experts have warned that the latest details of Exxon’s long-term knowledge of global heating, which was first revealed to the public via reporting in 2015, could spell trouble for the business.

“The recent study provides additional quantifiable evidence and a new level of detail concerning the length and scale of the misinformation, which is likely to present further difficulties for the company in this regard,” said Karen Hutchinson, commercial litigation lawyer at UK law firm Stewarts.

Alyssa Johl, vice-president of legal at the Center for Climate Integrity, said that Exxon “pretty much nailed these predictions with incredible accuracy. That cannot be refuted at this point.” Johl said the research helps establish the “two very important pieces to the puzzle” in the cases against Exxon – that the company knew about the causes and consequences of climate change and that it then actively concealed and denied it.

A spokesman for Exxon said: “This issue has come up several times in recent years and in each case our answer is the same: those who talk about how ‘Exxon knew’ are wrong in their conclusions.” The spokesman quoted a New York judge, Barry Ostrager, who found in 2019 that Exxon’s executives were “uniformly committed to rigorously discharging their duties in the most comprehensive and meticulous manner possible”.

But the claims that Exxon intimately knew of the looming climate emergency more than 40 years ago are of little surprise to Ed Garvey, now a semi-retired geochemist who worked for Exxon from 1978 to 1983, taking carbon dioxide measurements from oil tankers.

Garvey said that he and his scientific colleagues at Exxon were “very much aware of the problem” of global heating within the first year of his stint at the company. He said the company hired elite-level scientists and used cutting-edge technology to determine future temperature trends, so the accuracy of the science was to be expected.

“The scientific leaders at Exxon very much saw this as a big deal that could impact the bottom line of the company and have ramifications for the whole globe,” Garvey said. “We thought we’d deliver the news that we couldn’t continue like this to the board and that Exxon might diversify.

“It was never in question to us that human activity was causing the climate to change. It’s really reprehensible that they had this knowledge and then said: ‘We have no need to change course at all.’ I find it immoral for them to say that there was uncertainty. It’s beyond the pale. I can’t reconcile myself with it, other than they just didn’t care.”

Dollar stores are sweeping rural America, but the boon for bargain hunters comes with unhealthy food