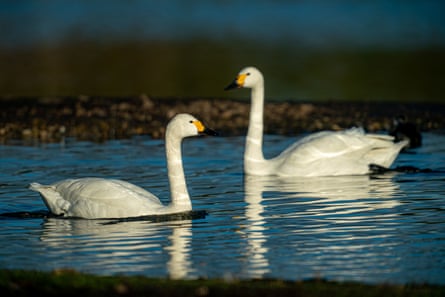 Every winter’s evening, from November to February, one of the most dramatic of all our natural spectacles takes place on the Avalon Marshes, near my home in Somerset. Here, as dusk falls, up to half a million starlings – refugees from the far north and east – gather together in the skies, before roosting in the reedbeds below.

Over the past few years, this has become quite a tourist attraction. On busy weekend afternoons, hundreds of people come to witness the starlings’ mesmeric aerial displays, known as murmurations, as huge numbers of birds twist and turn against the setting sun.

Yet if you talk to birders who’ve lived here for many years, you’ll soon discover that this impressive display is a mere shadow of the what it used to be. Twenty or more years ago, at least two million starlings darkened the Somerset skies each evening as they passed overhead. Since then, numbers have fallen by at least 75%; maybe even more.

When it comes to declines in migrant birds, we have tended to focus on those that visit us each spring and summer. Many of these, such as swifts, swallows, warblers and flycatchers, have suffered serious population declines in recent years. But a recent feature by David Campbell in the magazine Birdwatch, ominously entitled The Disappearing, points to another group of birds we should also be concerned about: our winter visitors. Vast numbers of these travel to Britain each year from further north and east, to take advantage of our relatively mild winter weather, ice-free waterbodies and reliable supplies of food.

The most prominent species overwintering here are ducks, geese and swans, collectively known as wildfowl. Many travel from as far afield as Canada, Greenland, Spitzbergen and Siberia, as well as places closer to home, like Iceland and Scandinavia.

Since the years following the second world war, the Wildfowl & Wetlands Trust headquarters at Slimbridge in Gloucestershire has been playing host each winter to hundreds of Bewick’s swans, which travel here after breeding on the Siberian tundra. Soon after these elegant birds first arrived at Slimbridge, the celebrated conservationist, Peter Scott, along with his teenage daughter, Dafila, realised that individual swans could be identified by the unique pattern of yellow and black on their bills, so the numbers wintering there could be accurately calculated.

On a single day, during the harsh winter of 1978-79, 610 different Bewick’s swans were counted at Slimbridge, with over 700 recorded during the winter as a whole. Yet there were just 50 or so swans present.

In Britain as a whole, following a series of poor breeding years caused by warmer summers in the Arctic, winter numbers are down by more than 70% in less than a decade. According to the WWT’s Dr Julia Newth, “this decline in Bewick’s swan numbers is deeply concerning. Watching the annual ‘swanfall’, where hundreds of wild Bewick’s swans arrive in swirling flocks, is one of winter’s natural spectacles. It is tragic that we risk losing this”.

Along with the Bewick’s swan, and its larger relative the whooper swan, we also welcome vast flocks of geese: indeed, for one species, the pink-footed goose, roughly 90% of the entire world population overwinters in the UK. This species is one of the few bucking the trend, with numbers actually rising; but the wintering flock of bean geese in south Norfolk, which as recently as 1990 numbered 400 birds, is now down to single figures.

Ducks, too, are getting more and more scarce. I grew up in the west London suburbs, in the days when the local gravel pits and reservoirs were a reliable winter home for smew. Their striking snow-white plumage, edged with lines of black, brightened up many a cold December day. In the winter of 1956, a flock of almost 150 smew gathered at north London’s Brent Reservoir; nowadays you would be lucky to see a single one anywhere in the capital. Here in Somerset, another striking black-and-white duck, the goldeneye, has virtually vanished; having declined rapidly during since I first arrived here, less than 20 years ago.

Watching the annual ‘swanfall’ is one of winter’s natural spectacles. It is tragic that we risk losing this

The numbers of many smaller species are also plummeting. Scarce, but always regular, winter visitors, including the great grey shrike, shore lark and Lapland bunting, are far rarer than they were when I began birding in the 1970s. And other annual spectacles, such as the huge starling roosts that once graced London’s Leicester Square and Bristol’s Temple Meads railway station, have long since vanished from our cities.

There are two main reasons for these declines: both connected with the climate emergency. One is simply that the populations of many species – including Bewick’s swans and starlings – are now in steep decline. This is down to several factors, including a loss of habitat, and the effects of a rapidly warming climate on food supplies.

These problems are also affecting our summer visitors. But another factor – a phenomenon known as “short-stopping” – only applies to these wintering birds. Short-stopping, first identified by scientists almost a decade ago, is the direct consequence of a rapid rise in average winter temperatures across northern Europe. As a result, many birds, which would once have spent the winter here in Britain, now stay put somewhere along their migration route rather than crossing the North Sea. Staying put, however, is not without its risks: a sudden and unexpected cold snap can lead to high mortality, especially for young and inexperienced birds.

Meanwhile, in recent years, small numbers of our best-known summer visitor, the swallow, have begun to overwinter in south-west Britain. This is yet another sign – as if we needed one – that the climate crisis is dramatically changing the range, status and behaviour of many of our most familiar birds.

Do YOU think ill Brits should wear face masks on public transport? Vote here and tell us why…

The four diets that will help you live longer