The Great Pyramids of Giza and other treasures of Egypt have beckoned travellers for more than two millennia, who go seeking traces of powerful dynasties swept away by the sands of time.

They certainly sang their siren’s song to Abercrombie & Kent’s founder, CEO and co-chairman, Geoffrey Kent. Within 10 years of opening A&K in East Africa, A&K’s safari-going client base was asking “where next?”. For Geoffrey, who was “fixated on Egypt”, the answer was simple, but not without its challenges. At the time, non-Egyptian travel companies weren’t allowed to operate within the county, but thanks to his persistence and commitment to promoting Egypt, Geoffrey was the first non-Egyptian to be granted a license. His belief in this ancient land as one of the ultimate travel destinations has remained unwavering despite the passage of time and intermittent tumult. 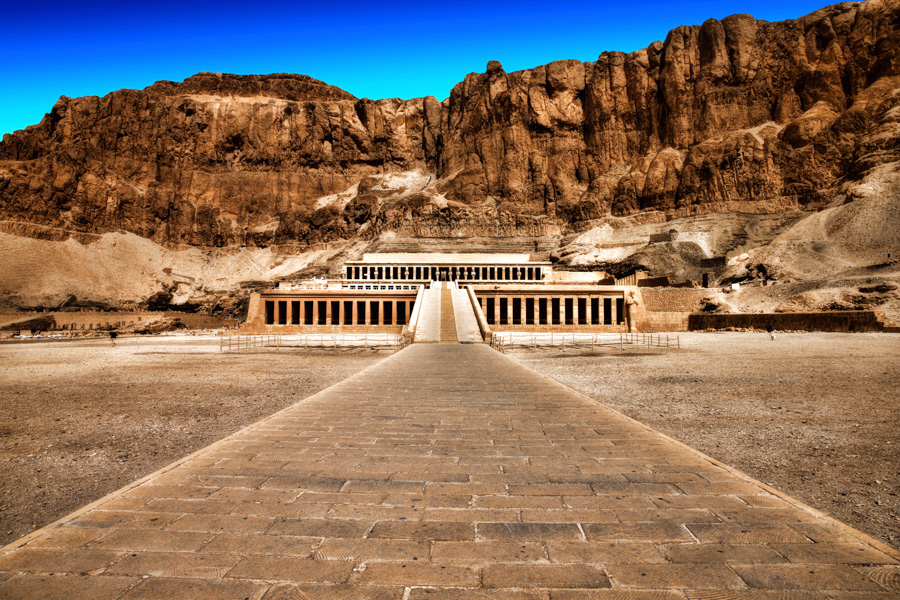 The temple of Hatshepsut near Luxor

“A bucket-list destination for centuries, there has never been a better time to travel to Egypt,” says Geoffrey. “Not only is the country buzzing with renewed confidence. The experience for tourists in Egypt right now is as welcoming and upbeat as I’ve ever seen it.”

On an A&K journey to this timeless destination, explore venerable tombs and temples to piece together the life and times of one of the world’s greatest ancient civilizations.

Cruise the fabled Nile in style – like the pharaohs once did – on Sanctuary Sun Boat IV or the newly refurbished Sanctuary Nile Adventurer. Disembark at iconic sites as well as little-known temples and voyage in the company of the region’s best Egyptologists, whose dedication to your journey is rivalled only by their passion for local art, history and culture. Discover the Aswan islands by felucca (traditional sailboat), or privately tour the famous Egyptian Museum of Antiquities. Travel on A&K’s new escorted tour – Egypt: Cairo & Cruising the Nile – before October 2020, to enjoy exclusive access to the long-awaited Grand Egyptian Museum. Set to be the world’s largest archaeological museum, this exhibition space will showcase a vast array of Ancient Egyptian artefacts – 30,000 of which have never been exhibited to the public.

A&K’s escorted tours, which reflect a nearly 60-year-old ethos of excellence, illuminate the world’s most inspiring places – such as Egypt, India, Peru, Jordan, China and Japan to name just a few – in a style in which tourists have always longed to experience them. On a tour such as Egypt: Cairo & Cruising the Nile – which balances must-see sites with those know only to the locals – group size is limited to 18; early booking solo travels pay no single supplement; it can be tailored thanks to the Design your Day® concept; and handpicked luxury hotels and river boats – in this case, the Nile Adventurer – provide a comfortable retreat at the end of the day.

So, whether you are a first-time traveller to this fascinating land or a seasoned visitor, wish to travel on a tailor-made basis or an escorted tour, A&K unveils the best of Egypt.

FIND OUT MORE ABOUT A&K HERE

The post Egypt: Epic escorted tours and other ways to see this ancient land appeared first on Silversurfers.