Diets are more effective in men — but drugs work better for women trying to lose weight, a study revealed today.

Researchers in Australia looked at the difference in pounds shed among overweight or obese men and women given appetite-suppressing drugs.

Women lost around a fifth of their body weight, but men taking the same drugs lost just 13 per cent, according to the University of Sydney team.

Meanwhile, a review of around a dozen weight loss studies among people who stuck to a healthier diet and exercise regime showed men almost always lost more weight than women.

The researchers said the mechanism behind their findings are unclear — but should be further studied to give people personalised weight loss treatment. 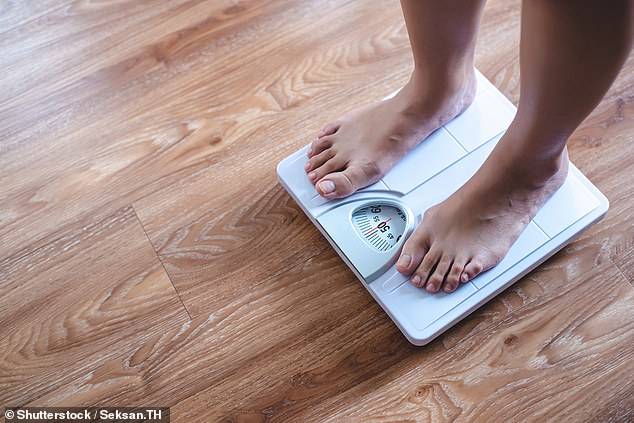 Researchers in Australia looked at the difference in pounds shed among overweight or obese men and women given the same appetite-suppressing drugs. While women lost around a fifth of their body weight, men taking the same drugs lost just 13 per cent, according to the University of Sydney team

People prefer healthier products and are willing to pay more for them, a study has found.

They showed that eight in 10 people are willing to pay more cash for healthier foods.

People said they would pay 31 per cent more, on average, for healthier versions of regular products.

Volunteers would also pay 35 per cent more, on average, for meals and snacks that contained wholegrains or extra fruit and vegetables, according to the results.

However, results were mixed for low salt, fat or sugar products, with fewer people willing to pay more for these.

The researchers, from Deakin University in Victoria, said this may be down to people under-estimating the effect of salt, fat and sugar on their health.

They may also be worried that these options would not taste as good, the team suggested.

Lead author Dr Moosa Al Subhi said: ‘These findings can increase our understanding of consumer preferences for healthier products and also provide retailers and food manufacturers with information about how to respond to customer’s increasing health and wellness concerns.’

The team noted that the effect of weight loss interventions — such as dieting and medical treatment — are not usually reported separately for men and women.

This is despite physiological and biological differences between the sexes that could affect attempts to shed fat.

To get to the bottom of whether gender impacts the success of weight loss attempts, the team looked at data from three studies that involved a total of 16,428 people.

The first included 1,961 overweight people who had at least one health condition due to their size.

The volunteers received either 2.4mg injections of semaglutide — which hijacks the body’s appetite regulating system to reduce hunger cravings and calorie intake — for 68 weeks or a placebo jab.

Results showed that those taking semaglutide lost 16.9 per cent of their body weight, on average, while the placebo group lost just 2.4 per cent.

However, when separated by gender, women taking semaglutide lost a third more weight than men — 18.4 per cent of their body weight, compared to 12.9 per cent.

The second study saw 3,723 overweight or obese adults offered a 3mg dose of liraglutide — another weight loss injection that suppresses appetite — or a placebo for 56 weeks.

The final study enrolled 10,744 over-55s who were overweight or obese and had type two diabetes or cardiovascular disease. They were given took appetite-suppressing tablet sibutramine or a placebo pill.

After one year, those taking the drug lost 4.5 per cent of their body weight, on average, compared to two per cent in the placebo group.

But women taking the drug lost 5.2 per cent of their body weight, compared to 4 per cent among men.

The researchers said their findings, which will be presented at the International Congress on Obesity in Melbourne this week, are at odds with a review of 11 studies that looked at lifestyle interventions — such as eating healthier and exercising more.

It found that men lost more weight than women in 10 of the 11 papers.

However, while men shed more pounds, women still logged ‘significant’ weight loss meaning that a healthier lifestyle should still be recommended for those trying to lose weight, they said.

The authors said: ‘Gender differences in weight loss interventions with pharmacological treatment have not been studied extensively.

‘Our findings suggest females lose more weight than males in pharmacological weight loss interventions, though the mechanisms for this are unclear.

‘This finding is contrary to most dietary regimens where, if there is a gender difference detected, males tend to lose more weight than females.

‘The identification of gender-related variables may improve the personalisation of treatment with anti-obesity drugs to achieve the optimal weight loss outcomes for patients.’

Study co-author Dr Samantha Hocking, an endocrinologist at the university, said women may lose more weight when taking appetite-suppressing drugs due to the pharmacokinetics of the drugs — how they are absorbed and metabolised by the body.

‘Physiological variations between genders often results in differences in the way drugs are absorbed, handled, distributed and excreted within the body,’ she said.

Professor John Wilding head of clinical research into obesity at the University of Liverpool who was not involved in the study, said: ‘One possible explanation for the greater response in females to pharmacological interventions may be that as (in general) women are lighter than men.’

As both men and women receive the same dose, women may be receiving a slightly stronger dose in relation to their body weight and therefore have a stronger response to the drug, he said.

Professor Wilding added: ‘It is more difficult to explain why men may do better in response to lifestyle interventions.

‘But this might relate to social factors and differences between men and women who choose to take part in research trials.’