Just one glass of wine a week during pregnancy is enough to physically alter the shape of a baby’s brain, a study has found.

Babies exposed to even low amounts of alcohol prenatally had a shallower right superior temporal sulcus (STS) – which is involved in cognition and language.

Expectant mothers are now being urged to ‘strictly avoid alcohol’ entirely while pregnant.  Figures indicate one in seven women in the US consume alcohol to varying degrees during pregnancy.

‘As we show in our study, even low levels of alcohol consumption can lead to structural changes in brain development and delayed brain maturation.’

He added: ‘Unfortunately, many pregnant women are unaware of the influence of alcohol on the fetus during pregnancy.’ 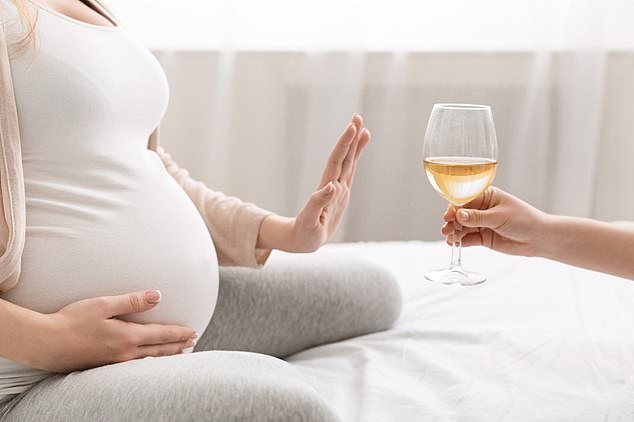 No amount of alcohol is safe while pregnant, a European study has shown (stock image)

WHAT IS FOETAL ALCOHOL SYNDROME?

Foetal alcohol spectrum disorder refers to health complications in babies that are caused by their mother drinking alcohol during pregnancy.

Alcohol in an expectant mother’s blood can be passed to the baby through the placenta.

Babies cannot process alcohol well, meaning it stays in their body for a long time.

It can damage their brain and body and stop them developing normally in the womb.

This can result in miscarriage, while babies who survive could be left with lifelong health problems.

The risk of FASD increases in relation to how much alcohol is consumed during pregnancy.

Around 10 per cent of children with FASD have three facial features, including small eyes, a thin upper lip and a smooth philtrum – the area between the nose and mouth.

There is no treatment for FASD and damage to a child’s brain and body cannot be reversed.

Exactly how alcohol damages babies’ brains has been unclear to scientists.

Alcohol alters the structure of cells, reducing myelination – their protective coating process – and the number of interconnections among cells.

Prenatal development has two stages, the first being the embryonic stage that comprises the first eight weeks of development where the precursors of what will become organ systems are determined.

Alcohol introduced at this stage can have significant repercussions depending on the population of cells negatively affected, which can range from birth defects to miscarriage.

The greatest impact is behavioral.

The Austrian team looked at the brains of 24 fetuses exposed to alcohol between weeks 22 to 36 of pregnancy using MRI scans.

Alcohol consumption was determined via anonymous surveys of the mothers.

Seventeen moms drank les than one alcoholic drink per week, while two said they had up to six drinks a week and one said they consumed more than 14.

Six of the mothers also admitted to binge drinking at least once while pregnant –  having more than four drinks on one occasion.

Dr Kienast plans to invite the infants back for further scans after they are born, to track how alcohol consumption affected their development.

The study will be presented today at the annual meeting of the Radiological Society of North America in Chicago, Illinois.