Home Health news Does SENTIA actually work? The alcohol free drink that promises to get you drunk
Health newsRecent Post

Does SENTIA actually work? The alcohol free drink that promises to get you drunk

Could a 0 per cent alcohol tonic made of a botanical garden’s worth of plants and herbs really get you ‘drunk’ and leave without a hangover the next day?

This is the extraordinary claim by the makers of SENTIA — a new non-alcoholic drink, which mimics the feeling of downing a few pints by tricking he brain’s internal chemistry.

So, does it work? How tipsy can you get off it? And it is actually pleasant to drink?

To find out the answers to these all-important questions we sent two rosy cheeked, and hopefully merry, MailOnline reporters to test out the concoction and give their verdict. 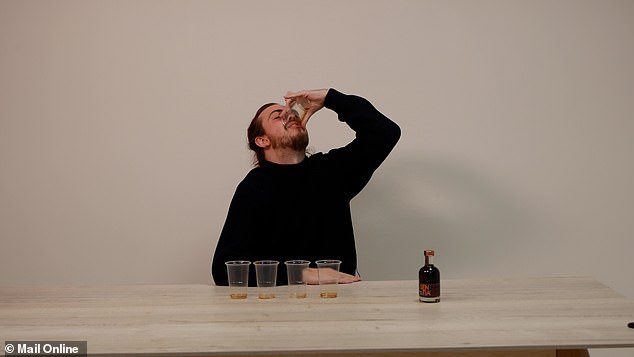 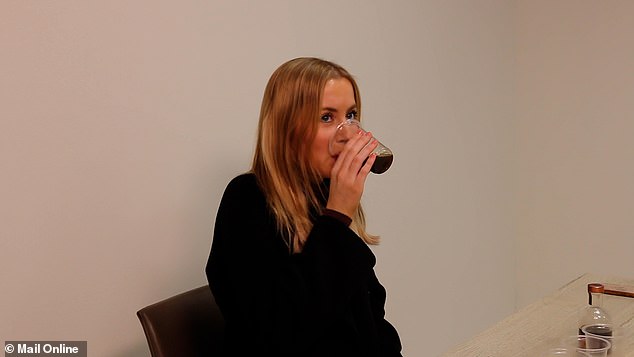 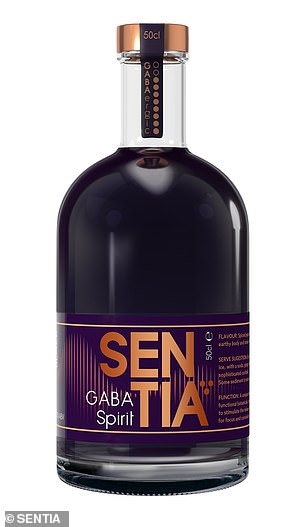 SENTIA black (pictured here) is due to to release next month and has about a dozen botanical ingredients. The drink is marketed as a alcohol free alternative that actually gets you drunk through some clever chemistry

But first, what is SENTIA? And how does it, in theory, get you in a drunk-like state without using the time-tested alcohol?

A brief glance at the back of SENTIA bottle, which costs just shy of £30, reveals about a dozen more ingredients than your normal tipple.

This label also features a warning common to many of the drinks it seeks to emulate, do not consume if pregnant or breastfeeding.

For serving, the makers of SENTIA recommend either having it neat or mixed with a soda or ginger ale.

The exact miracle ingredient that emulates alcohol is a closely guarded secret by ex-Government drugs tsar Professor David Nutt and his team at GABA Labs.

But how it works is in the manufacturer’s name. 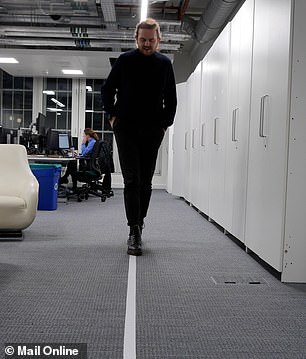 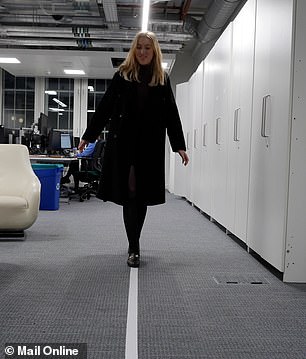 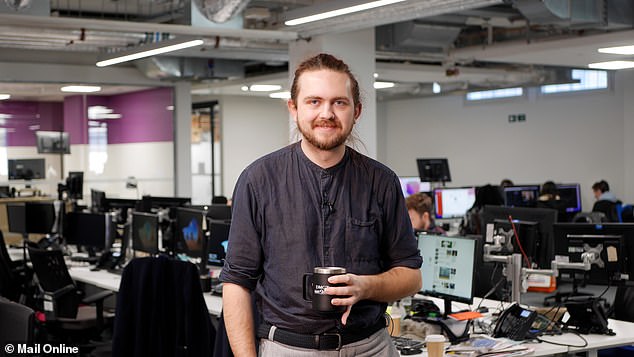 And here’s the aftermath, Phi; reported no symptoms of a hangover whatsoever 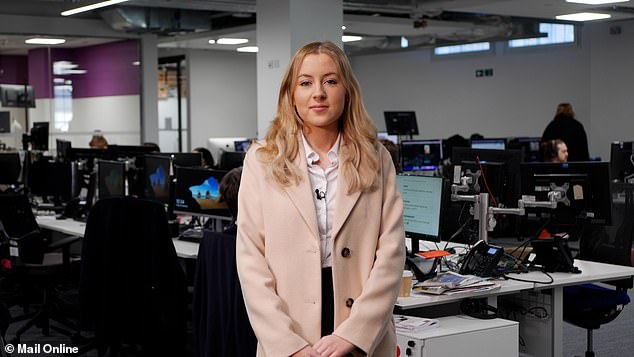 And Kitty wasn’t nursing the nursing the paracetamol the next day either, also reporting no ill effects 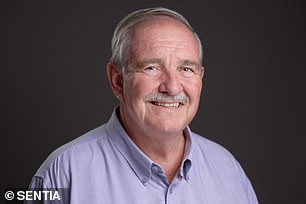 British neuropsychopharmacologist Professor David Nutt is the mastermind behind SENTIA and said he wanted to create a drink that mimicked the social and fun aspects of alcohol, without the ills

SENTIA’s potent concoction activates a neurotransmitter in the brain called gaba, in the same way as a few shots of tequila, glasses of wine or bottles of lager.

While you might not know the name you’ll recognise the effect, gaba receptors help relax the brain.

It is, for this very reason, why you feel more more sociable, light an bubbly after a few tipples.

But SENTIA, unlike alcohol, stops at about the two to three drinks mark and doesn’t build-up other chemicals in the body that result in hangovers and poor life choices at office parties.

It also doesn’t carry any of the long-term health woes regular and excessive alcohol use can bring, like cancer, liver problems and obesity.

SENTIA’s creators say this is the general mission of their work, to make a drink capable of mimicking alcohol’s positive aspects, without the well-established harms.

To put it to the test we trialled the drink on two MailOnline who were more than keen to spend a portion of their workday trying to get drunk.

How did it taste?

‘I mean I’ve drunk worse,’ he said after taking his first sip.

Testing it straight, without any of the recommended mixers, he said: ‘It’s a bit spicy, like really peppery.

‘It tastes weird on its own, there’s like a burning there but its not an alcohol burning it’s a peppery burning.’

But Phil best enjoyed it when mixed. He added: ‘Oh that’s good.

‘The ginger beer really compliments the peppery-ness of the spirit, it’s actually quite nice.’

‘I enjoyed it when diluted with other things,’ she said.

But Kitty described the concoction on its own as being ‘quite vile’.

Did it get you drunk?

‘I can definitely feel a little buzz, my commute home should be interesting (giggles).

After one hour, Kitty said she started to feel similar to having a few drinks: ‘I’m feeling the effects a bit more than I was.

‘I have a bit of a headache and I definitely feel its gone to my head a bit — but I’m feeling okay, maybe just slightly tipsy.’

But three hours later she said this had largely passed: ‘I’m feeling quite relaxed and quite sleepy although I did notice on the way home that it felt like I had had a bit to drink, I felt a bit tipsy, but that’s pretty much gone.’

And did they have a hangover the next day?

‘I’m feeling alright, I don’t have a hangover so that’s good,’ he said.

‘I definitely wasn’t drunk. I was maybe a little bit buzzed like if I’d had a couple of drinks.’

‘I feel really good there’s no sign of a hangover at all,’ she said.

What is SENTIA and how does it work?

Here we answer all your questions about SENTIA, the zero alcohol tonic that claims to get you ‘drunk’.

Its a drink that can be consumed neat or straight.

Water and about a dozen botanicals. But it contains no chemicals, or more importantly, ethanol.

So how does it get you drunk?

Technically speaking, it doesn’t. Being drunk is solely a consequence of actual alcohol.

SENTIA just copies some of the same chemistry that replicates that ‘tipsy’ feeling.

The mix of ingredients effectively activate some of the same neurotransmitters that alcohol does.

These are called gaba receptors and when triggered help you relax, making you a bit more merry and sociable.

This, the drinks creators say, is what motivated them to make SENTIA — giving consumers the positive social aspects of alcohol without the harms.

Speaking about those harms, will SENTIA make me hungover?

No. The drink doesn’t carry some of the other aspects of alcohol that can make your body feel awful the next day.

Additionally, it doesn’t increase your risk of cancer or liver disease the way regular or excessive alcohol consumption can.

Its significantly more pricey than a regular tipple, currently retailing £29.99 for 200ml, about eight drinks.

SENTIA is the brainchild of British neuropsychopharmacologist Professor David Nutt and GABA Labs.

Anything else I should know?

Similar to alcohol, it should not be consumed by women who are pregnant or breastfeeding as well people under the age of 18.

Can I drive after drinking it?

The makers recommend people ‘be aware of any affects you experience and act responsibly’ after drinking SENTIA when comes to driving.

Will it make me a better dancer?

It could certainly make you think you’re a better dancer.

DR MICHAEL MOSLEY: Why slow, deep breathing is like giving yourself a mini tranquilliser!