A two-year-old who was so pale doctors feared he had blood cancer has finally been given a diagnosis — he was drinking too much cow’s milk.

Johnny Donovan, from Oregon, was born at the height of the pandemic in 2020.

He took a liking to cow’s milk from age 1 and his mother, not knowing the dangers, allowed him keep drinking.

By age two, Johnny was fatigued, fussy, . He was also very pale, which his mother chalked up to typical cloudy Pacific Northwest weather and their Irish heritage.

His mother did not connect the dots until Johnny’s pediatrician expressed concern over his pallid complexion and ordered a barrage of blood tests to pinpoint the cause.

The comprehensive blood panel showed that Johnny’s hemoglobin level hovered between 4.5 and 5.6, far below the normal threshold for a two-year-old of 10.9 to 15. The doctor feared that low hemoglobin levels pointed to a leukemia diagnosis. But actually, Johnny was severely iron deficient.

His pediatrician told Ms Donovan after diagnosing him with an iron deficiency that she feared Johnny could have leukemia or another type of blood cancer. 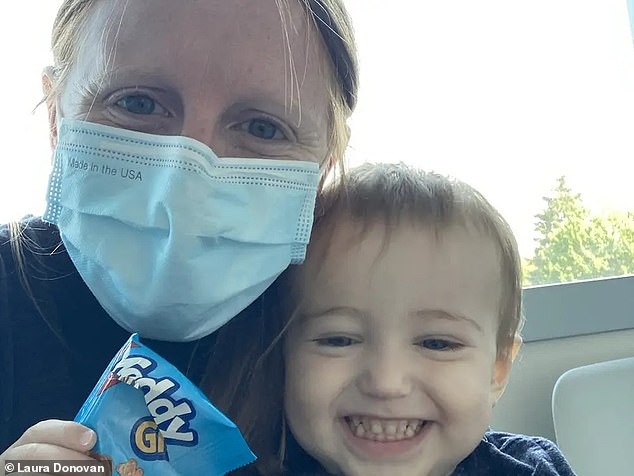 Laura Donovan’s son Johnny was feared to have a form of blood cancer after his pediatrician observed an abnormally low amount of hemoglobin, a key protein for delivering oxygen to other cells in the body. It turns out, Johnny had a form 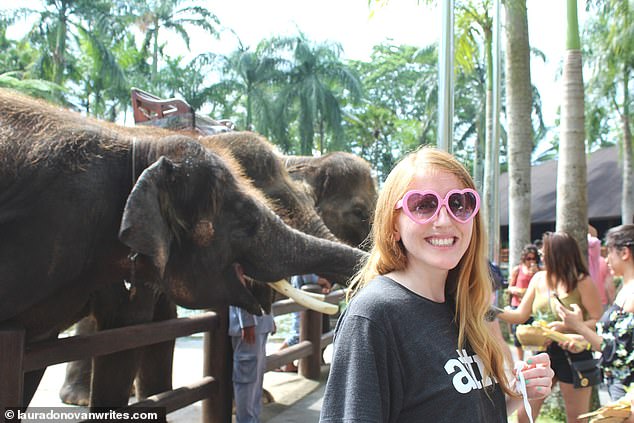 Laura Donovan lived through the culture-shifting Got Milk campaign and grew up believing that milk was the key ingredient to  health development. She didn’t realize, though, that too much milk can be a bad thing.

In an essay published Monday, Ms Donovan said: ‘Sure enough, he was always in a sour mood, never seemed well rested, and had nearly constant meltdowns.

‘I suspected he drank too much milk, which was filling him up, but I didn’t realize excessive intake could do so much damage.’

His iron deficiency anemia (IDA) was so severe that he had developed a heart murmur, a whooshing sound heard through a stethoscope when blood flows abnormally over your heart valves.

Milk has been lauded as the go-to source of vitamin D and calcium for children to develop strong bones.

The powerful 1993 Got Milk campaign promoted the nutritional benefits through ads featuring the cast of Friends, Simpsons characters, and the Williams’ sisters with prominent milk mustaches.

WHAT DOES IT MEAN TO BE IRON DEFICIENT?

Iron deficiency is caused by an insufficient amount of iron in the blood to make hemoglobin.

Without hemoglobin, red blood cells cannot ferry oxygen to other cells throughout the body.

Iron deficiency anemia (IDA) is the most common nutritional disorder in the world according to the World Health Organization.

Twenty per cent of American children will be diagnosed with anemia at some point.

Roughly two to three per cent of toddlers have iron deficiency anemia.

But there is such a thing as milk overkill.

‘Johnny constantly felt like garbage but had no way of telling me. My husband and I regret assuming that Johnny was moody when his heart was quite literally distressed,’ Ms Donovan said.

Over-consumption of cow’s milk is a precursor to iron-deficiency anemia. Anemia is a common problem in American children, though the type of anemia that Johnny had was less common.

To hear that too much milk can be a bad thing was a surprise to Ms Donovan, who, like most Americans, was to believe that milk was the key to growing up big and strong.

She said: ‘Johnny’s hematologist said most parents are unaware that too much milk can be a problem. We see our kids every day, but infrequent visitors such as a doctor or relative can notice worrisome physical changes in our little ones.’

Johnny recovered from his heart murmur and anemia a month and a half into treatment, which included iron transfusions and dietary supplements.

His personality and disposition have changed for the better, Ms. Donovan said. He smiles at everyone he meets, he is more eager to eat, and he wakes up talking eagerly to his stuffed animals.

Ms Donovan said: ‘For the first time in his little life, I feel like I’m finally getting to know the real Johnny.’