Hundreds of children with mental health problems will be prescribed surfing, roller-skating and gardening classes by their GP.

NHS mental health services will offer the activities, which also include sport clubs, music classes and youth clubs, to 600 11 to 18-year-olds in 10 parts of England who are in the queue for care.

If the NHS-backed social prescribing trial scheme is successful at reducing anxiety, depression and loneliness, it could be rolled out nationwide to offer respite to those stuck in the backlog.

Dr Daisy Fancourt, a psychobiologist at University College London who is running the trial, said three in four youngsters see their mental health deteriorate while waiting for treatment.

‘Social prescribing has the potential to support young people while they wait, by providing access to a range of creative and social activities that could enhance their confidence, self-esteem and social support networks,’ she said.

However, there is ‘scant evidence’ that the approach actually improves physical health or reduces reliance on GP services, according to a study published last week. 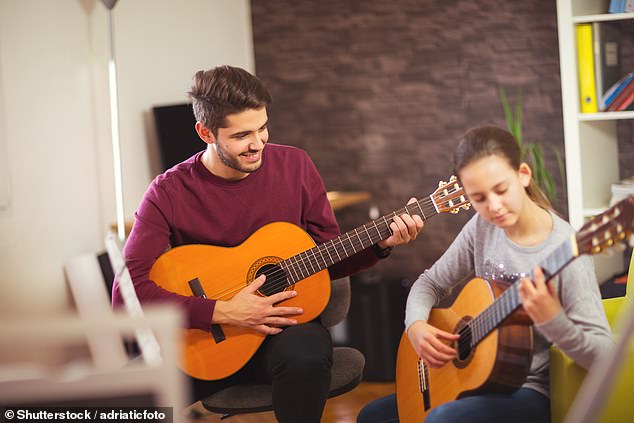 As part of a trial, NHS mental health services will fund the activities, which also include sport clubs, music classes and youth clubs, to 600 11 to 18-year-olds in 10 parts of England who are in the queue for care

Gardening clubs, art classes and walking groups have all been hailed as healthy alternatives to popping pills.

But there is ‘scant evidence’ social prescribing actually improves people’s health, according to a scientific review.

Researchers found no consistent evidence that the radical approach to treatment — now widely available on the NHS — actually works.

There was only ‘limited evidence’ that the schemes improved people’s perceptions of personal health or the quality of care received, University of Dublin scientists said.

Far more robust research is needed before policymakers continue to push it as treatment, they conclude.

One in six youngsters in England are thought to have a mental health condition.

But they face waits up to three years for NHS care — such as appointments with psychologists, therapists and social workers —  in parts of the country.

Dr Fancourt told The Guardian: ‘Young people’s mental health is one of the greatest challenges facing the NHS.

‘Currently many young people referred to child and adolescent mental health services face long waits, during which time more than three-quarters experience a deterioration in their mental health.’

Social prescribing has ‘enormous potential’ and might ‘help address determinants of mental illness, decrease stigma and shame sometimes associated with mental health problems, and give young people choice and control of their care’.

Ten NHS mental health trusts will offer a ‘buddy’ staff member to reach out to youngsters waiting for treatment and offer them a range of classes to pick from.

Dr Fancourt and her team will monitor how many young people take up the classes, as well as how practical and costly the scheme is.

Social prescribing was previously offered through a Government-funded scheme to young people in Luton, Sheffield and Brighton and Hove between 2018 and 2020.

Participants reported a boost to their personal and mental wellbeing, especially among those who felt the worst at the start of the trial, and a reduction in loneliness.

The trial reduced mental health stigma, and ‘filled a gap in mental health services’ by providing a near immediate access to emotional support, they added.

However, some faced difficulties getting to and from classes and some were expensive.

The UCL study will be the largest trial of social prescribing among children yet.

GPs are increasingly relying on the non-traditional ‘treatment’ as an alternative to drugs to treat those with mental health issues.

Professor Martin Marshall, the chair of the Royal College of General Practitioners, has previously told of how he prescribed cooking classes to a patient so he could make healthier meals rather than relying on fast food.

However, a University of Dublin study, published last week in the journal BMJ Open, found that there is no consistent evidence that social prescribing works.

They examined eight studies, involved around 6,500 people, who took part in social prescribing activities for between one month and two years.

They found little proof the activities improved social support, physical function or reduced use of primary health services, such as GPs.

And there was only ‘limited evidence’ that the schemes boosted people’s perceptions of their health or the quality of the quality of care they received.

Far more robust research is needed before policymakers continue to push it as treatment, they concluded.

Supporters of social prescribing argue that the approach can save the NHS money by benefiting people’s health — reducing GP visits and reliance on the health service.

However, the researchers warned it has ‘the potential for creating harm with link workers being overwhelmed with inappropriate referrals and having little idea how to respond.’

Social prescribing is often measured by patient reports on their ‘wellbeing’ rather than ‘hard’ measures of clinical health — such as whether it reduces appointment requests and hospitalisations, they added.

However, NHS bosses say giving people more control over their health empowers patients to ‘look after their own physical and mental health as well as reducing demand on health and social care services’.

Social prescribing became an official health service policy in October 2019 when the UK National Academy of Social Prescribing was opened by the then health secretary, Matt Hancock.

At the time, he said it could ‘help us combat over-medicalising people’ and save money.

People with one or more long-term conditions, who have mental health problems, are lonely or isolated and who have complex social needs are the main targets of the scheme.

It sees them prescribed activities such as volunteering, group learning and healthy eating advice.

They may also be referred to local charities and support networks, job centres, social care services, health services and other emergency services.