Cancer death rates have fallen in the past five years, an official report has shown after Joe Biden declared war on the disease.

The American Cancer Society said survival rates ‘accelerated’ from 2015 to 2019, rising by 2.3 per cent a year compared to 1.8 per cent over the last decade-and-a-half.

Falling lung cancer fatalities — the most common type — due to fewer people smoking, improved early diagnosis, treatment and access to healthcare were driving the trend.

But there was a downturn in fatalities from 11 of the 19 most common cancers — also including melanoma, prostate and leukemia — thanks also to improvements in diagnosis and treatment.

They warned, however, that progress fighting other cancers and particularly those related to excess body weight, physical inactivity and diabetes had stalled and, in some cases, even reversed.

In men, cancers of the bones and joints were the fastest growing, while for women this was uterine and also liver cancer — both linked to excess body weight.

The number of cases diagnosed remained level in the report, and rose slightly for women by 0.2 per cent a year.

The report considered millions of cancer cases reported across all 50 states of the US, but it only covered the period from 2015 to 2019 — before the Covid pandemic began.

Experts said today it was testament to the ‘ongoing progress’ in fighting cancer, but noted there were still ‘concerning trends’ as fatalities from all cancers were not ticking down.

There are fears the downward trend in cancer deaths was reversed by the Covid pandemic because many steered clear of hospitals for fear of catching the virus — despite facing concerning symptoms.

It comes after President Joe Biden launched his ‘cancer moonshot’ plan which seeks to halve the number of deaths from the disease within 25 years. 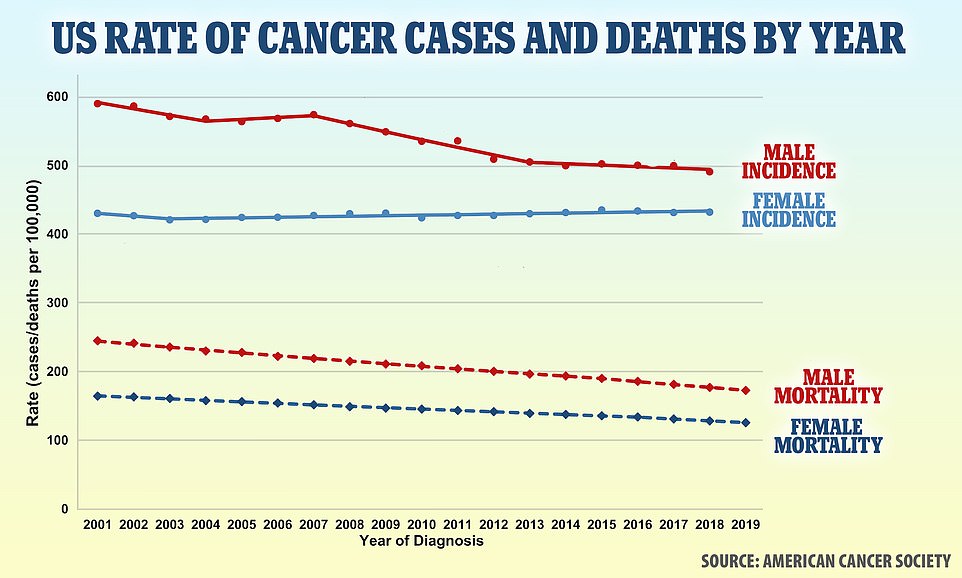 The above graph shows the cancer diagnosis rates (top lines) and fatality rates (bottom lines) for males (red) and females (blue) since the start of this century. It reveals that fatality rates are trending downwards overall, while case rates are steady 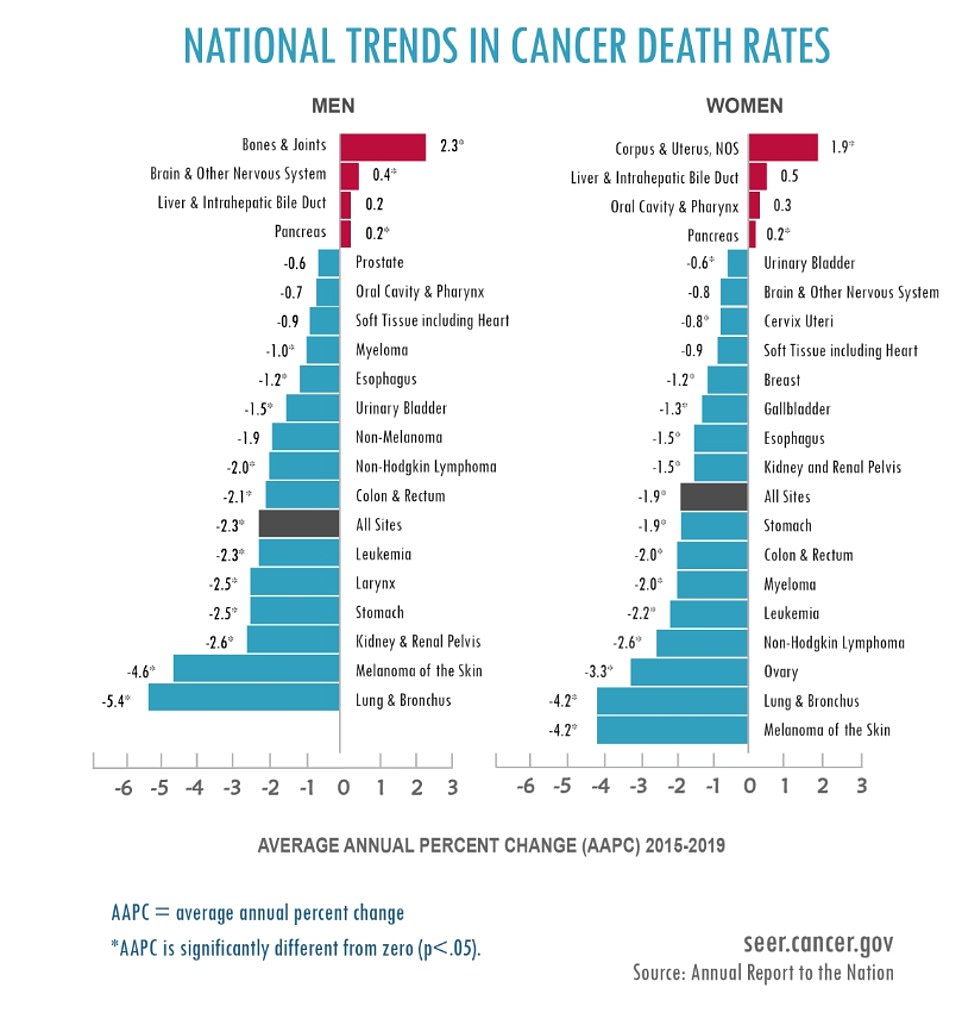 The above graph shows the rises or falls in death rates for cancers by gender, year and cancer type. It reveals there has been a large drop in lung cancer, but there are also rises in cancers related to being overweight 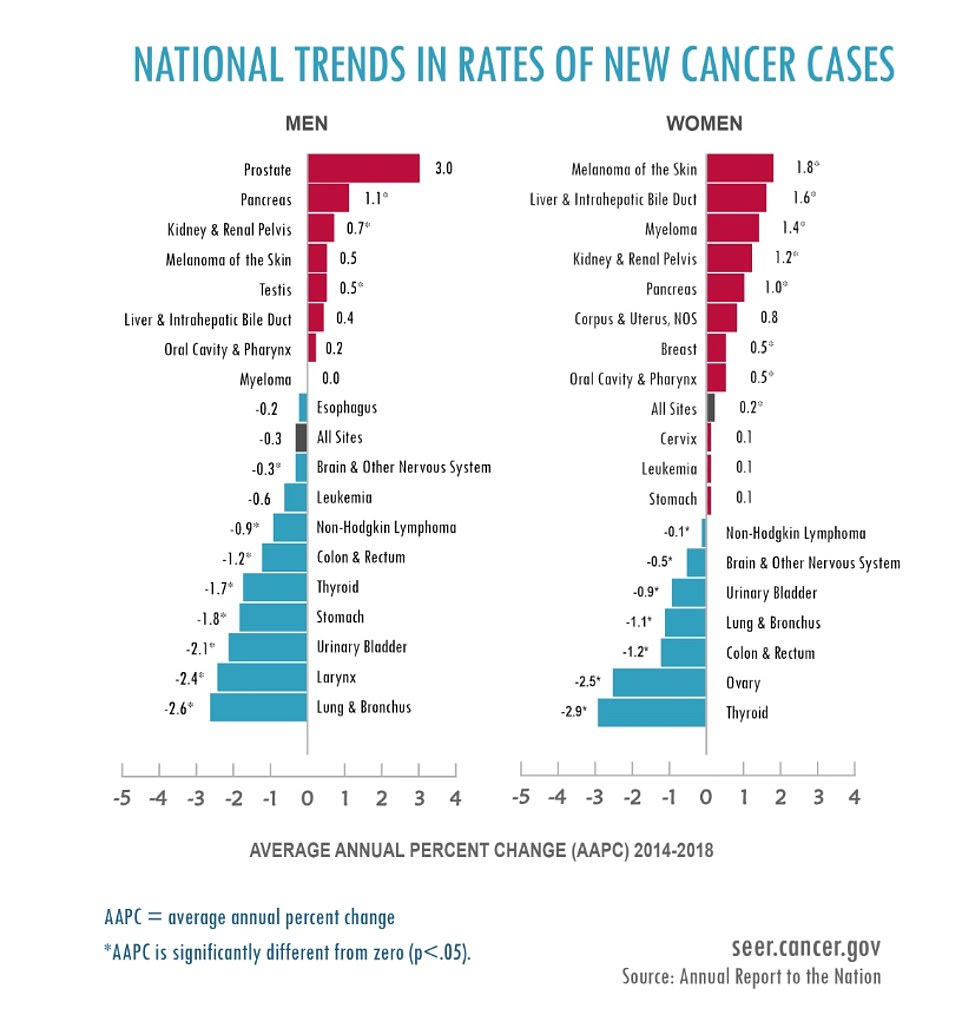 The above shows the number of cases diagnosed between the two genders per year from 2014 to 2018. There are rises mainly in cancers related to excess weight, inactivity and diabetes 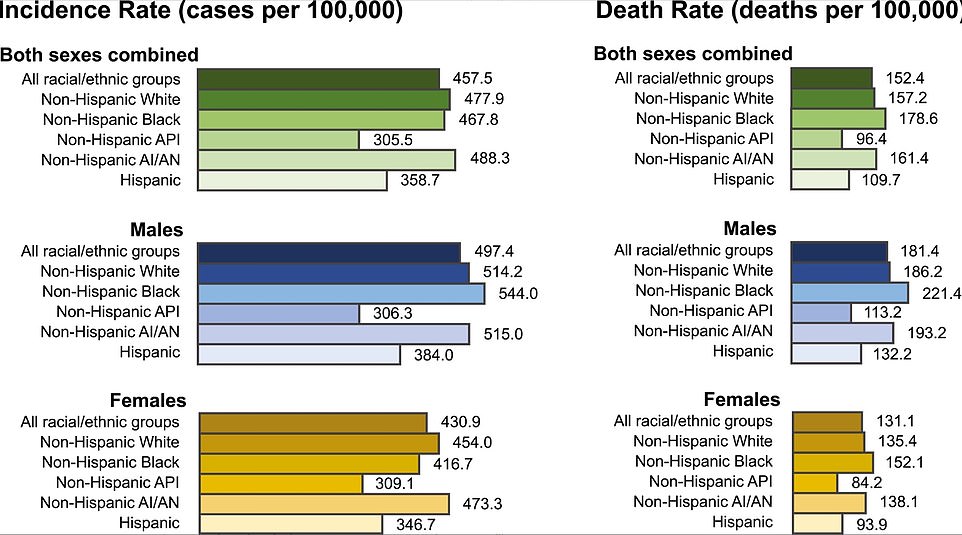 The American Cancer Society’s annual report (ACS) on cancer cases and deaths relies on data reported across all 50 states and Washington D.C.

About 1.9million Americans are diagnosed with cancer every year, while 600,000 die from the disease every year.

Joe Biden on Monday said ending cancer ‘as we know it’ was one of the reasons he ran for president as he supercharged his ‘Cancer Moonshot’ initiative with a shot of glamour from the Kennedy family.

Biden, who wants to cut cancer deaths in half over the next 25 years, said cancer can be transformed into a disease that can be managed and lived with.

He issued his new call to arms at the John F. Kennedy Library, on the 60th anniversary of Prsident Kennedy’s famous ‘Moonshot’ speech, where JFK rallied America to beat Russia to the moon – which was accomplished in 1969.

‘When he set that goal, he established a national purpose that could rally the American people and a common cause. And he succeeded,’ Biden said of JFK.

‘Now in our time, on the 60th anniversary of his clarion call, we face another inflection point, and together, we can choose to move forward with unity, hope and optimism. I believe we can usher in the same unwillingness to postpone – the same national purpose – that will serve to organize and measure the best of our energies and skills to end cancer as we know it. And even cure cancers once and for all.’

The fight against cancer is personal for Biden, who lost his son Beau to brain cancer in 2015. The Cancer Moonshot, originally created when Biden was vice president, came in the wake of Beau’s death.

‘This Cancer Moonshot is one of the reasons why I ran for president,’ Biden said.

The ACS said the downturn in fatalities was largely attributable to the continuing decline in lung cancer fatalities, which dropped by around five per cent a year overall — the fastest decline.

They credited this with a reduction in smoking rates, falling from 40 per cent of US adults in the 1960s to just 13 per cent today, as well as improved medical coverage and better treatments.

Over this period scientists developed treatments for inoperable, early stage lung cancer, as well as minimally invasive surgery for the disease.

Eligibility for Medicaid was also expanded from 2014 to people earning up to 138 per cent more than the poverty income threshold which saw millions more apply.

But they warned of a slowdown of progress in cancers related to weight gain.

About 40 per cent of American adults are now classified as obese, a rise of a quarter from just two decades ago when the rate was 30.5 per cent.

Among men the sharpest upticks in cancer deaths were seen among those diagnosed with bone and joint cancer, brain cancer and liver cancer.

For women the rate rose fastest for those with uterine, liver or oral cavity and pharynx cancer.

Overall, there was a decline in deaths in 11 of the 19 most common cancers.

Cancer still remained the second most common cause of death, however, behind heart disease.

Dr Monica Bertagnolli, an oncologist and director of the National Cancer Institute, said: ‘The findings in this year’s Annual Report to the Nation show our ongoing progress against cancer, continuing a more than two-decade trend in declining mortality that reflects improvements in preventing, detecting, and treating cancer.

‘The advances shown in the report underscore the importance of working together across society to develop effective, equitable approaches to tackle this complex disease.

‘I look forward to working with all our partners in the cancer community to meet these challenges head-on, because people affected by cancer—and that includes all of us—are counting on it.’

Department of Health and Human Services Secretary Xavier Becerra said: ‘Today’s report is good news in our fight against cancer and is a reminder of the importance of President Biden’s Cancer Moonshot℠ initiative.

‘I’m deeply impressed by the progress we’re making against cancer and firmly believe we can meet the President’s goal of reducing the death rate from cancer by at least 50 per cent over the next 25 years.

‘We can and must end cancer as we know it.’

It comes after President Biden vowed to halve cancer rates by the year 2047.

His ‘cancer moonshot’ program is a ‘commitment’ to reaching this goal, that will see new diagnostic tests, treatments and therapeutics developed.

The President aims to make cancer a disease that can be managed and lived with.

It is also personal for Biden, who lost his son Beau to brain cancer in 2015.