Damar Hamlin may have suffered a one-in-200 million heart injury that shut off blood to his brain and triggered a cardiac arrest, doctors say.

The Buffalo Bills safety, 24, collapsed during Monday night’s game against the Cincinnati Bengals and was administered CPR on the field.

This morning the Bills revealed Hamlin had suffered a cardiac arrest and that his heartbeat was restored on the field. He has been taken to hospital, where he remains in a critical condition.

Doctors believe the blow to the Buffalo Bills star’s chest threw his heart’s pumping mechanism out of rhythm, disrupting blood flow around his body and shutting off his brain, known as ventricular fibrillation.

But to make matters worse, experts speculate this may have happened during a very vulnerable moment in the heart’s electrical cycle, triggering a condition known as ‘commotio cordis’.

This window is only 20 milliseconds long, making commotio cordis incredibly rare. Just 30 people a year suffer the injury worldwide and only around 200 cases have been reported among Americans. It has previously been noted in young baseball or hockey players who receive a blow from a baseball or hockey puck to the center of their chests. 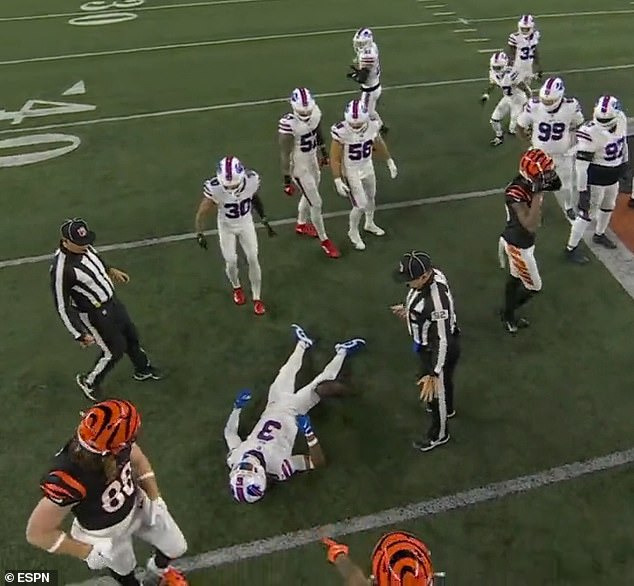 Hamlin collapsed moments after collapsing, falling backwards and laying motionless on the floor

The critical question, doctors say, is how long Hamlin’s brain went without the oxygen carried to organs by blood flow.

Brain tissue dies rapidly when deprived of oxygen, which could leave permanent injuries.

But there is hope for Hamlin. About nine in 10 people who have cardiac arrest outside the hospital die.

But CPR can help improve those odds. CPR can double or triple a person’s chance of survival if it is performed in the first few minutes of cardiac arrest. 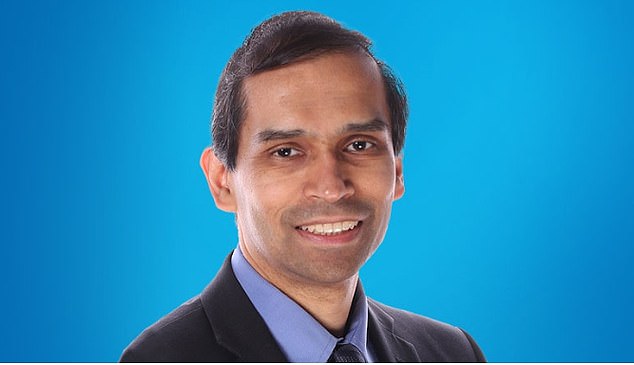 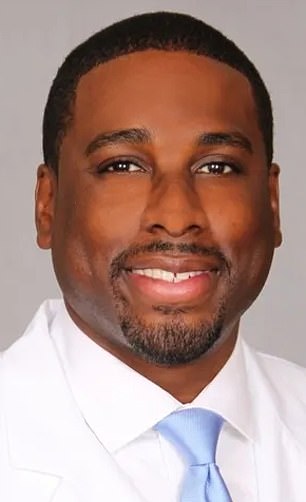 Dr Bernard Ashby (left), a vascular cardiologist, said the player had likely suffered ‘commotio cordis’ — when a sudden hit to the chest causes a cardiac arrest. Dr Chris Haddock, a primary care physician in Georgia, agreed with the diagnosis 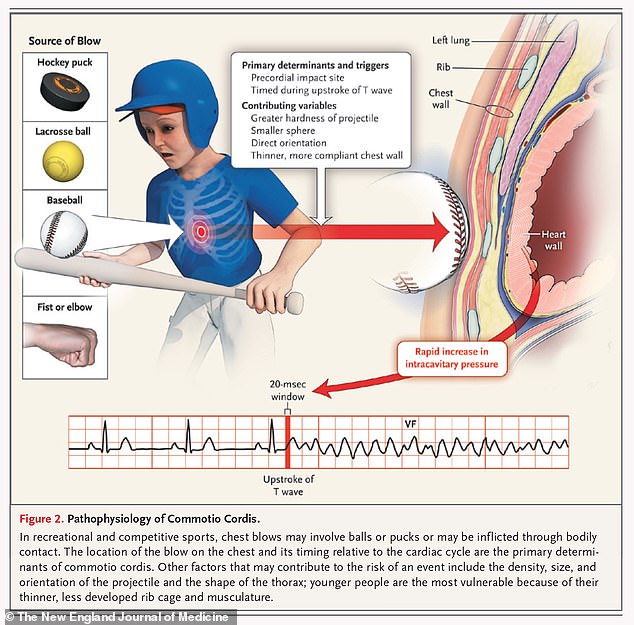 The above graphic from a medical journal shows what happens when someone suffers commotio cordis, which many doctors believe is what Damar Hamlin may have suffered

‘The first thought that occurred to me was that it was something called commotio cordis,’ he said.

‘It really refers to the classic situation of injury to the chest.

‘This is usually in baseball when someone hits a line into the pitcher’s chest and that sudden impact can trigger abnormal heart rhythms.

‘The only way to come out of that is to deliver an electric shock and perform CPR.’

Asked why the player was able to stand up moments afterwards, he said: ‘It could be the case that for a couple of seconds there was enough blood getting to the brain.

‘When the heart stops beating we lose consciousness within a matter of seconds, those may have been the few seconds before the brain stopped getting enough blood.’

Dr Bhatt said it would be 24 to 48 hours before doctors could say how the player was, after they had completed a battery of tests.

‘People may be out cold for that long, and the heart and brain function can take a good 24 to 48 hours to recover,’ he said.

In the best case scenario, patients may be in hospital for at least a week to ten days, he said. In worse cases this will be longer.

Asked whether the player could return to the pitch in the coming months, Dr Bhatt did not rule it out but said this was a ‘much, much more complex question’.

‘[Assuming minimal damage to the player], [doctors] would want to do a lot of testing,’ he said.

‘This would include some sort of a stress test on a treadmill, with exercise under monitoring circumstances to make sure the same thing does not happen again.

‘It would not be unexpected to also do a stress test pushing them to the limits and just making sure nothing bad happens.’

Other doctors also suggested that the player had suffered from commotio cordis, including Dr Bernard Ashby, a vascular cardiologist in Florida, and Dr Chris Haddock, a primary care physician in Georgia. 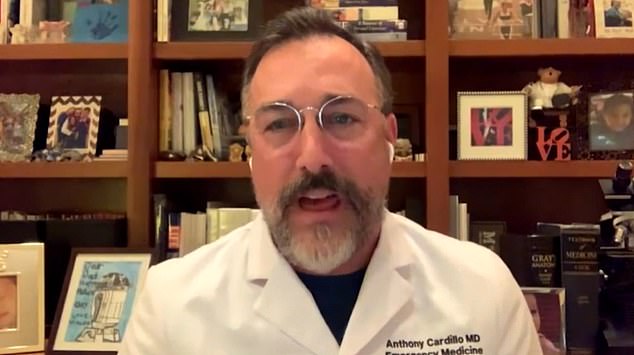 Dr Anthony Cordillo, an emergency medicine expert in Los Angeles, California, said that the player may have suffered a ventricular arrthymia

Hamlin is not reported to have any underlying conditions, although these can raise the risk of someone suffering from commotio cordis.

Young males, aged between four and 18 years, are more vulnerable because their chest walls are more flexible, doctors say.

But the risk drops as people get older with a hardening of the chest wall. It is also lowered as older adults are less likely to take part in sports.

Commotio cordis may not cause damage to the heart because its tissue has not been torn.

But the longer the blood is not pumping correctly, the more likely it is that the brain and other areas of the body can become damaged as they are deprived of oxygen.

Medics emphasized to DailyMail.com that commotio cordis is an extremely rare condition.

But for professional athletes — with no underlying health conditions — there was no way to completely eliminate the risk.

Players do wear padding on the chest, however, to reduce the force of any impacts to the chest area.

Dr Bhatt said: ‘It is extremely rare, I have dealt with only a handful of cases in my lifetime.

‘If you think about soccer for example, how many times have you seen this happen? It is not too common.’

Dr Larry Phillips, a cardiologist at NYU Langone, told DailyMail.com that he also has dealt with very few cases during his career.

‘There is no good registry that keeps track of all the cases,’ he said.

Dr Ashby said on Twitter: ‘The video of Damar Hamlin from a cardiologist’s perspective resembled commotio cordis — a phenomenon that occurs when a sudden blunt impact to the chest causes cardiac arrest.

‘Timely defibrillation is life saving and prevents anoxic brain injury. I pray an AED was near.’

Dr Haddock added: ‘As a physician I believe Damar Hamlin was likely suffering from commotio cordis where a blow to the chest at a precise moment in the electrical cycle stops the heart.’

He also said: ‘Those trying to tie this to vaccine status to project their unscientific beliefs are terrible, horrible people.’

Dr Anthony Cordillo, an emergency medicine expert in Los Angeles, California, suggested to ABC7 that the player had suffered a ventricular arrhythmia.

He told the broadcaster: ‘This is a phenomenon that as the heart is going between its beats, as that heart is depolarising and then repolarizing, if you have traumatic trauma to the chest at a very specific moment as that heart is repolarizing itself, then you can go into a lethal ventricular arrhythmia.

‘And that looks like what happened because he was able to stand up and at that point his heart started what we call fibrillating, that’s that cardiac arrest where he collapsed back down.

‘And they would have recognised at that point the odd pulse.’

He ruled out an injury where the aorta — a major blood vessel — was severed, because people suffering that type of injury do not get back up.

Other doctors have suggested that the violent contact may have caused a bulge in a blood vessel — medically termed an aneurysm — to burst.

It may have combined with a previously undetected heart defect to trigger a life-threatening event, among other possibilities, they added.

WHAT IS  COMMOTIO CORDIS?

Commotio cordis is when a sudden blunt impact to the chest causes sudden death without damage to the ribs, sternum or heart and without underlying cardiac problems.

More than 224 cases have been reported to the US Commotio Cordis Registry since 1995, and the survival rate is 24 per cent.

Commotio Cordis is a primary arrhythmic event that occurs when the energy generated by a blow is confined to a small area of the heart -called the precordium – generally over the left ventricle.

It profoundly alters the electrical stability of the myocardium, the muscular wall of the heart, which contracts and relaxes in the process of pumping blood.

This results in ventricular fibrillation, the most serious cardiac rhythm disturbance whereby the heart quivers instead of beats, disrupting the functioning of blood pumping.

Sometimes triggered by a heart attack, ventricular fibrillation causes blood pressure to drop, cutting off blood supply to the vital organs such as the brain.

Commotio cordis events have most happened in sports, and so the phenomenon has become more well known to the sports communities and physicians.

It is thought that the stiffening of the chest wall contributes to the decrease in incidence in older individuals, and possibly because not many older people play ball related sports.

Warning on entering fords after car gets stuck in Pembrokeshire