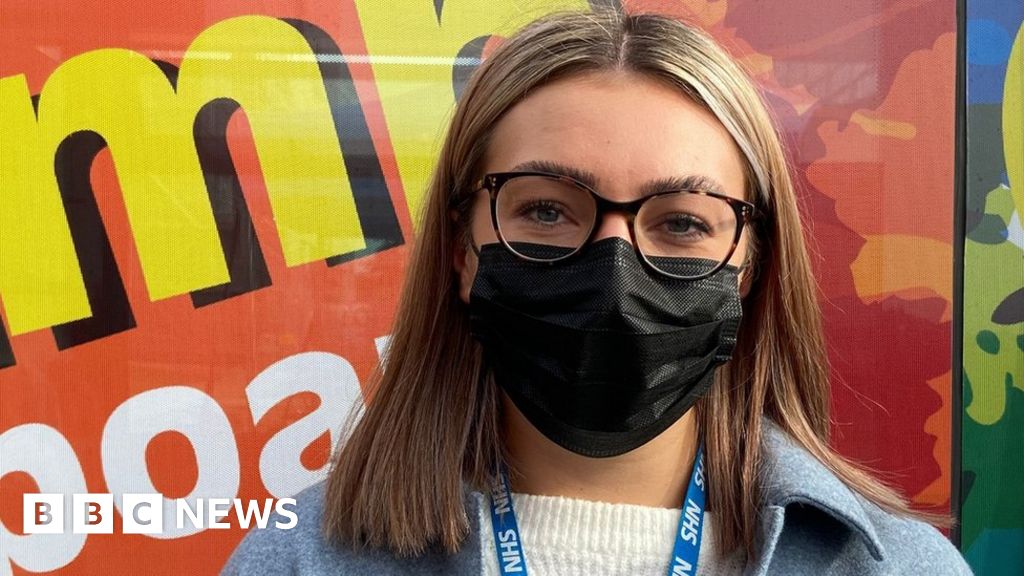 As the first proper week of classes get under way at a college in Essex, an NHS vaccination bus has rolled on to campus. What is the uptake among its students and how are they feeling about getting the jab?

Having the vaccine against coronavirus is being “strongly encouraged” at Colchester Institute, a further and higher education college with 7,000 students aged 16 and above.

The roll-out of Covid injections was extended to UK teenagers in the summer and 16 and 17-year-olds started to be invited to book their Covid vaccines in August.

Trying to keep things running as normal as possible is part of the reason for having the vaccination bus on site for the week.

Executive vice principal Gary Horne says: “It’s wonderful to see our students back on site on a full timetable and we want to keep it that way.

“Not only are the students encouraged to get vaccinated to support their own health in reducing the severity and the spread of the virus, but also they’re doing it support their colleagues in class, their families and friends.”

He says last year was “really tough on us all”.

“There’s no doubt about it, education was disrupted. We coped the best we could with the online technology we brought in at short notice,” says the vice principal.

“This year, touch wood, so far we have started well, the infection rates have been low and we want to keep it that way.”

He says the vaccination bus is “just one of many initiatives” at Colchester Institute to “make sure that we can keep those infection rates as low as possible”.

Among those at the bus getting their jab is Thibs.

The 16-year-old says it is “very convenient”.

“If I was at home and I was sent a letter from the NHS saying to book a vaccine, it’s a lot of effort,” says the computer science student.

“But now it’s just a couple of minutes to walk from my lesson and I can just quickly go into the bus, get my vaccine and go back to my lesson again.”

He says he has no worries about the vaccine and “if something does arise, it’s nice to know I’ll be protected and safe from anyone who might have it”.

“Having the vaccine adds an extra assurance that I’ll be safe out there; I can meet other people and talk to friends and talk to older loved ones as well,” says Thibs, who is starting his first proper week at Colchester Institute.

‘I wanted to get the vaccine as soon as I could’

Grace Robards has already had her first jab and is booked in for her second next month.

She says if she had not already got her first, she would have gone to the bus that is parked up at the college.

“I had no doubts, I wanted to get the vaccine as soon as I could,” says the 18-year-old.

“I work in a cafe and a lot of our customers are of the older generation and I feel uncomfortable going near them if I know that I could be putting them at risk.”

While the government has halted plans to introduce vaccine passports as a condition of getting nightclubs and large events in England, Ms Robards says she is “not too bothered by it [the passports]” and it was not a motivator for getting vaccinated.

“I just want things to go back to normal so I can go out, have fun and be around people without worrying too much,” she says.

The acting student says the last 18 months has been “difficult”.

“Learning online isn’t easy at all, especially studying acting – I had to stand on my bed and read out a script,” she says.

“Being back in the studio is really, really nice now. We were in one day a week last year and now we’re in three days a week.

“So it’s so much better, it’s a lot easier to learn now and things are getting back to normal, so it’s great.”

‘I’m happy to do anything that will help anyone’

The 19-year-old says she wants to get jabbed as her dad is high-risk, she wants to protect her grandparents, and “just in general, I wanted to feel safe going outdoors”.

“I’m happy to do anything that will help anyone, so, as soon as I could get it done, I went and got it done.”

Similarly to Grace, she says she is “not too bothered” by the vaccine passport.

“But I suppose it [getting vaccinated] is a plus as well if it means I can do more things and return back to normal quicker,” she adds.

‘I want to keep myself safe and my family safe’

Also taking up the chance to get jabbed on the bus on site is Cameron.

“I didn’t even know it was coming but it conveniently came and gives me a good opportunity to get the vaccine, stay safe and keep my friends safe, my family safe,” says the 16-year-old.

He says the most important thing to him is keeping “myself safe and my family safe, everyone around me”.

The teenager, who is starting his first week at Colchester Institute, says living through the pandemic has been a “rollercoaster”.

“We’ve lost a lot of school time but luckily we worked a way around it and it’s getting better,” he says.

‘Get jabbed and help spread the word’

With the vaccination bus at Colchester Institute for the week, it is hoped many students will “take advantage of the opportunity” to get jabbed, says service manager Natasha Jones.

“It’s convenient for them to come in between lessons, be encouraged by their peers and to encourage their peers as well to get the vaccine, and also spread the word,” she says.

She says students “can just drop in as long as they have got 15 minutes afterwards to wait” and staff and volunteers on the bus can help answer questions, and ease any nervousness about getting the vaccine.

“As with everyone, they just want it to go back to normal now,” she adds.