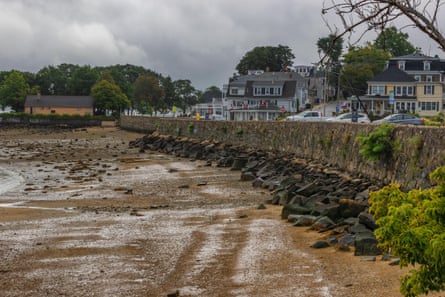 There were more than a few issues with a recent federal plan to wall Miami off from the dangers of climate change.

The $5bn proposal involved building a massive concrete seawall in the fragile marine ecosystem of Biscayne Bay. It included using taxpayer money to elevate private waterfront mansions, while constructing a wall through the middle of downtown and sometimes low-income neighborhoods.

But the idea of an imposing seawall was also – in the eyes of many residents – unforgivably ugly. Miami’s Downtown Development Authority, which was reportedly alarmed by the prospect of hulking concrete slabs, brought in an architectural firm that created renderings portraying the seawall plan as an almost dystopian vision of the future, featuring grey walls defaced with graffiti reading “Berlin” circling a moat of dirty water.

That helped galvanize an opposition which became so intense that now the project is going back to the drawing board.

It might seem frivolous to focus on the aesthetics of a project that proponents hope will protect Miami from future storm surges that could flatten homes and kill thousands of people – a danger growing more dire each day due to climate change. But the residents, environmentalists, businesspeople and politicians battling to amend this recent seawall proposal see the fight in existential terms: they are trying to preserve the soul of the city.

“Miami is all about our connection to the water,” said Rachel Silverstein, executive director of the environmental research and advocacy group Miami Waterkeeper. “At what point are people not going to want to live here anymore because of the solution they’re proposing, which is so destructive to our community and our identity.”

Up and down US coastlines, cities as diverse as New York, Charleston, Norfolk, Houston and San Francisco are staring down the same dilemma: tall concrete walls could technically protect homes and property from seas rising because of climate change, but the proposals are so potentially hideous that some locals are rejecting them.

“The fights are around many of the same issues,” said Billy Fleming, a director at the University of Pennsylvania’s Weitzman School of Design who specializes in climate change adaptation. “It’s about people worrying about what these seawall proposals could do to the visual character of a place.”

Coastal communities have for decades ignored warnings about climate change, constructing more and more buildings and homes in flood-exposed areas even as the dangers rise. And now that coastal dwellers are seeing the drastic solutions required to keep them safe, potentially turning their charming cities ugly, people are snapping to attention.

That’s what happened when the US army corps of engineers, a branch of the military that is also behind the Miami plans, proposed a $1.1bn seawall to protect Charleston, South Carolina, a city constructed on marshes and tidal creeks whose downtown is so vulnerable to storm surge and sea-level rise that the risks are often described as “existential”.

The plan is causing local backlash because it has the potential, in the words of Post and Courier columnist Robert Behre, to be “pretty hideous”. He was referring to renderings produced by the city’s Civic Design Center, which showed a thoroughfare named Lockwood Boulevard blocked off from scenic views of the Ashley River by a tall concrete wall.

A South Carolina commentator named Will Folks compared it to the Berlin Wall, writing earlier this year that “one of the most gorgeous cities in the world is on the verge of erecting an unsightly Eastern Bloc edifice in the hopes of containing rising floodwaters”.

“I’d say aesthetics are almost core to the debate,” said Belvin Olasov, co-director of an advocacy group called the Charleston Climate Coalition. “In Charleston you can just walk by the sea, that’s sort of a traditional connection, so the idea of blocking that off with a giant concrete wall is objectionable to many people.”

But he pointed to other problems with the proposal. The seawall wouldn’t protect the historically Black neighborhood of Rosemont due in part to the high cost of extending the wall that far north in the city – potentially it could even make flooding there worse by blocking drainage ditches and creating what would essentially be a bathtub for rain.

That is also a concern in Norfolk, Virginia, where the army corps is proposing a $1.6bn seawall that could protect the climate-vulnerable city from a hurricane-caused storm surge. But some locals fear water blocked by the seawall might merely be redirected south to the city of Portsmouth, the majority of whose residents are Black.

The ugliness and social inequity of such proposals may actually come from the same root cause – a mandate governing the operations of the US army corps to secure the highest value properties for the most efficient possible expenditure. That’s how you get unsightly concrete proposals that fail to protect an area’s most vulnerable residents, Fleming said.

“Any piece of coastal infrastructure has to go through the army corps’ permitting and approval process and they will never build anything other than what gives them the highest marginal benefit, and aesthetics don’t factor into that,” Fleming said.

The army corps did not respond to a request for comment.

In coastal communities facing heavy climate impacts, some locals are proposing an alternative: nature-based solutions such as restoring barrier islands, oyster beds and mangroves that more unobtrusively allow cities to co-exist with water, and better protect lower-income areas that are often left out of discussions around climate adaptation.

These measures “can address our nation’s disproportionate flood risk gap and start to fix the systemic inequalities and systematic racism of the past”, reads a 2021 letter to the US army corps of engineers signed by more than 100 environmental groups.

Those are the types of solutions that Miami Waterkeeper and others in South Florida are advocating for as an alternative to 20ft concrete walls buttressing the coastline. This fall the army corps began reconsidering its original proposal.

“They’re sort of rethinking everything now, and doing that with more public input,” Silverstein said. But that pushes back the timeline for protecting Miami, she said, potentially resulting in nothing being built until the 2030s, while the risk of catastrophic storm surge only gets worse and worse.

“We are facing a very real existential crisis from sea level rise and climate change,” she said. “Miami 50 years from now is not going to look like Miami today, we have to acknowledge that and plan for that.”

Despite public opposition in Miami and other cities, the preferred strategy from the army corps and federal policymakers is still to build hulking fortresses – such as the $29bn project it’s proposing in Galveston, Texas – literally walling off cities from the sea.

But in an era of escalating climate disasters, that may be exactly what some communities need. When planners in the 1940s proposed a flood wall for the Missouri town of Cape Girardeau, which sits alongside the Mississippi River, locals objected that it would be an ugly, tourism-killing disaster that could even trap “offensive odors” within the city.

When the river swelled five years ago and came within a few feet of breaching the wall, the town’s newspaper ran an editorial “appreciating the floodwall, and leaders who built it”, arguing that “without it, we probably wouldn’t have a Main Street lined with businesses today”.

It added: “We tip our caps to those leaders from previous generations who pushed for the wall and insisted on its completion.”