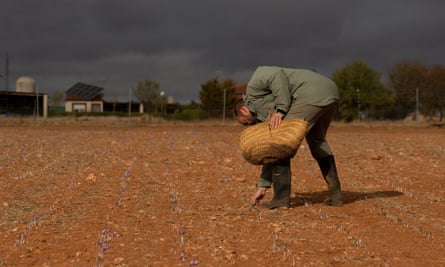 A sharp wind shunts clouds across the low and endless skies of La Mancha as Carlos Fernández stoops to pluck the last mauve flowers of the season from the cold earth. Their petals, which stain his index finger and thumb blue, enclose an almost weightless prize whose crimson threads are treasured in Spain and across the world.

But despite the prices his crop fetches, and the weighty comparisons those prices inevitably invite, the life of a saffron grower is not without its trials, travails and frustrations.

As well as the back-breaking picking and the painstaking sorting, there is the foreign competition, the unpredictable yields, the increasingly evident effects of the climate emergency and, on this particular day, the infuriating discovery that a gang of thieves with head-torches descended on his fields overnight and made off with some of the flowers. And then there are the dreaded words – “oro rojo”.

“Calling it ‘red gold’ damages our saffron because it makes it sound like something that’s expensive,” says Fernández, the president of the regulatory council of La Mancha’s Protected Designation of Origin saffron label.

“Everyone likes to compare it with gold and so when a housewife goes shopping and sees that a gram of saffron costs €9 [£7.75], she’ll think it’s an expensive product. But if you use it right – and in the right quantities – you’ll get 60 helpings from that saffron.” Divide nine by 60, he says, and the price of that little jar doesn’t seem quite so outrageous.

Sales, yields and marketing language are, necessarily, never far from Fernández’s thoughts. This corner of Spain produces some of the finest saffron in the world, and has done since the Arabs arrived with their crocuses almost 1,000 years ago, but the sector is a husk of what it once was.

A century ago, Spain was the largest saffron producer in the world, plucking, toasting and selling 140 tonnes grown on 13,000 hectares of land a year. By the 1970s, annual production had fallen to 70 tonnes.

Today, only 140 or so hectares – the overwhelming majority of them in Castilla-La Mancha – are estimated to be given over to saffron crocuses. Total production for 2022 was around 450kg. Iran, meanwhile, produces between 200 and 250 tonnes of saffron a year and Greece around 2.5 tonnes.

The biggest problem, according to Fernández, is that saffron growing has always been something of a sideline for Spanish farmers. Unlike the vine, olive, pistachio and almond sectors, which have boomed over recent decades, the saffron industry has never been properly scaled up, professionalised or mechanised. It remains rooted in the past.

“The big landowners would give their workers a bit of land where they could grow saffron to be used as a kind of currency,” he says.

“Once it was harvested, the saffron was stored away and brought out and sold when a family had a big expense to meet, such as a daughter’s wedding or building work on their house. That structure survives to this day, nothing whatsoever has changed.”

While that small-scale, low-tech approach may have kept saffron production going over the past few decades, it has also left it on the edge of extinction.

“We’re being held back by the idiosyncrasies of the sector itself,” says Fernández. “What we’re trying to do now is bring about a change and a transition so we’re not left behind in this folk tradition, which is where I think we are now. As producers, we can’t grow enough saffron to meet our customers’ demand all year round and that means it’s not a stable business.”

Production is unpredictable because the bulb-like corms from which the crocuses grow are susceptible to fungus and very sensitive to temperature changes. Over recent years, the 200 producers whose saffron has protected origin status have seen what the climate emergency is doing to their crops.

“Although it’s a crop that’s hard to predict as you get a different flowering each night, the figures we have suggest yields are going down,” says Fernández. “Last year, we were getting 3.5kg a hectare when the normal yield is 7kg to 9kg.”

Even though growers in La Mancha can sell saffron to their buyers for €5,000 a kilo, profits are eroded by the fact that sowing corms costs €25,000 a hectare, with no guaranteed yield because of the threats posed by fungus and higher temperatures.

Plummeting production in Spain has also sent buyers to overseas competitors that have the capacity to meet demand.

All of which is why Fernández and his fellow growers are asking the regional government of Castilla-La Mancha to fund an €18.5m strategic plan to save and develop the saffron sector.

Proper funding and research, they argue, could drive a five-fold increase in production and land use over the next five years. Healthy, pathogen-free corms could be bought from Holland, they say, or corms could even be developed in vitro, like garlic.

Add to that mechanisation that would allow robots to extract the threads from the flowers, and Fernández sees no reason why there couldn’t be 5,000 hectares of crocuses producing 25 tonnes of saffron in 10 years’ time.

The regional government of Castilla La-Mancha says it is committed to helping growers find solutions to the difficulties they face and to showcasing the protected crop. It says funds are available to attract more young people into the sector and to help farmers mechanise and modernise their harvests.

For now, however, the harvesting and processing of saffron in the area follows its ancient rhythms. Once the morning’s crop has been gathered and brought in wicker baskets to a small warehouse, half a dozen women – including Fernández’s mother, Caridad Segovia – put on overalls and hairnets and sit around a long table for the monda, or separating off the stigmas and style from the petals. They chat as they work, practised fingers moving independently of eyes. By the end of the monda, their fingers will be stained yellow.

For Segovia and her friends, saffron is a “social and family spice” whose picking and sorting binds the community together.

“If there was no saffron, we wouldn’t be here together like this,” she says. “Everyone can talk about their problems or their happinesses here. It helps us help each other. It’s a kind of therapy where people can talk and ask for help if they need it.”

Despite the hairnets, the overalls and the sterile interior of the warehouse, the scene is oddly timeless. As he looks on, Carlos Fernández wonders how long it will endure.

“If the temperatures keep rising as they are, if we don’t solve the health problems that corms have, which really reduce production, and if we don’t professionalise the sector, it’s very, very clear that it’s only a matter of time,” he says.

“A very high number of producers are now over 70 and when they stop, their children aren’t going to take over and screw up their backs when they could be doing office work. It’s not viable.”

Women should get up to SEVEN ultrasounds in pregnancy, expert claims

What you should eat BEFORE a morning work-out, according to an ex-marine turned fitness freak