It’s that time of the year when festive sandwiches start to line the shelves of supermarkets and high street coffee shops across the country.

Christmas dinner between slices of bread, pigs in blankets on rolls and brie and cranberry toasties are just some of the tasty options available at the likes of Tesco, Waitrose and Pret.

But while the festive period is often seen as a time for indulgence, some may be shocked to find out these lunchtime treats are packed with more calories than a McDonald’s burger and fries.

Even some plant-based sandwiches contain with more calories than a cheeseburger from the fast food chain.

And that’s just for the sandwich. Almost all of the shops offer a meal deal, which encourages people to buy drinks and snacks which can contain hundreds of more calories.

Experts advised Britons to only go for the festive sandwiches on their lunch break a couple of times between now and Christmas — and to opt for the meal that has less sugar and salt. 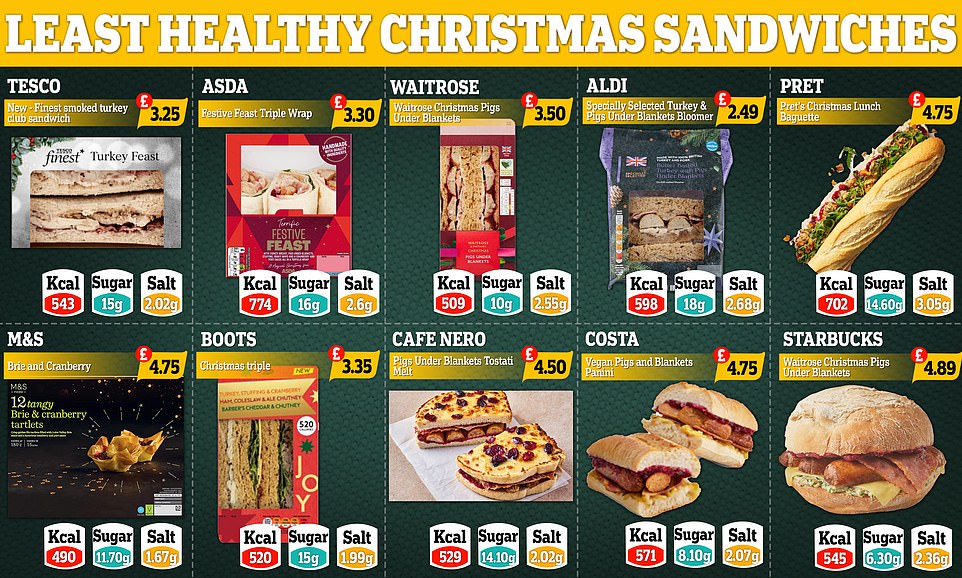 Christmas dinner between slices of bread, pigs in blankets on rolls and brie and cranberry toasties are just some of the options available at the likes of Tesco, Waitrose and Pret 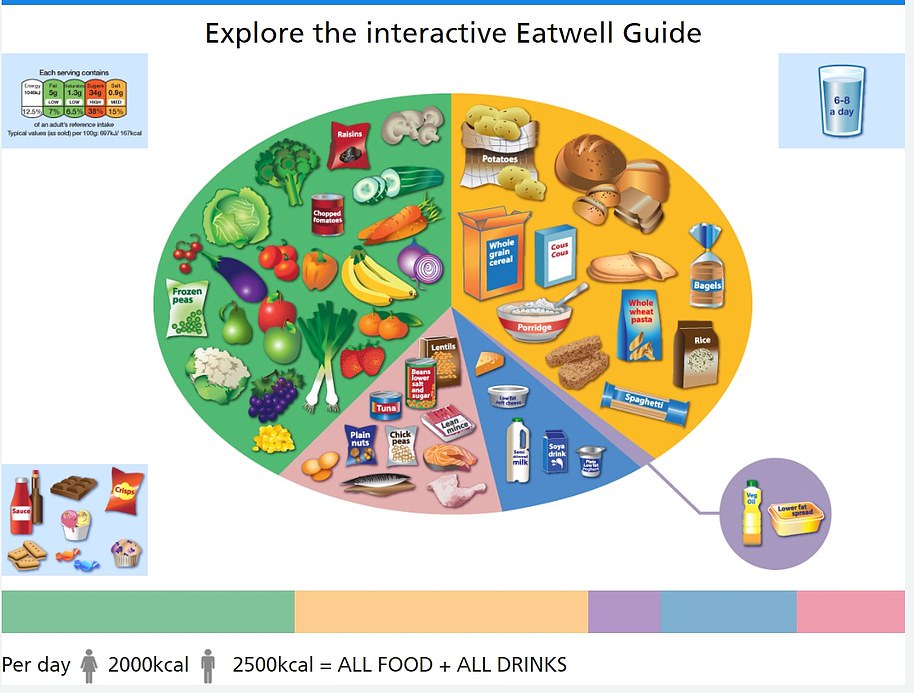 MailOnline looked at the nutritional content of around 80 festive-themed sandwiches on sale at 12 supermarkets and coffee chains, including Aldi, Sainsbury’s and Starbucks, and compared the most calorie-packed option available at each shop.

Asda’s Festive Feast Triple Wrap (£3.30) was revealed to be the most calorific, with a whopping 774 calories in three wraps, which are stuffed with turkey, pigs in blankets, stuffing, gravy mayo and cranberry sauce.

This is more calorific than a McDonald’s Big Mac and small fries (730 calories).

Pret’s Christmas Lunch Baguette (£4.75) is the next-worst offender with 702 calories in the sandwich, which is filled with turkey, cranberry sauce, pork stuffing and crispy onions.

A Specially Selected Turkey & Pigs Under Blankets Bloomer at Aldi (£2.49) contains 598 calories. This is more than two McDonald’s Cheeseburgers (298 calories each).

In the Pigs Under Blanket Roll sold at Starbucks, there are 545 calories — equivalent to two Kit Kat Chunky bars and a can of Coca Cola.

Tesco’s Finest Smoked Turkey Club Sandwich (£3.25) is packed with 543 calories — around as much as four packets of Walker’s Ready Salted Crisps.

A Pigs Under Blankets Tostati Melt at Caffe Nero (£4.50) has 529 calories. This is more than six McVitie’s Chocolate Digestives.

The Christmas Triple sold at Boots (£3.35), which includes a three different sandwiches — turkey, ham and cheese, has 520 calories. This is more than a KFC chicken drumstick and fries (445).

At Waitrose, the most calorific option is its Christmas Pigs Under Blankets sandwich (£3.50), which has 509 calories. This is equivalent to a small vanilla milkshake and brownie from McDonald’s.

As well as being stuffed with calories, some were full of salt. Adults are told to stick to less than 6g per day to avoid high blood pressure while, depending on their age, children are told to eat no more than 2g.

Meanwhile, Costa’s Vegan Pigs and Blankets Panini had 2.7g — despite possibly being perceived as more healthy, as it is meat-free.

And even though the lunchtime treats are seen as a savoury option, some had nearly twice as much sugar as sweet snacks.

Eating too much sugar over time can lead to weight gain and tooth decay.

At the other end of the scale, the Smoked Salmon and Soft Cheese festive sandwich at Waitrose (£4.50) has just 325 calories, while a Shapers Turkey, Cranberry and Stuffing option at Boots (£3) has 337.

Dr Duane Mellor, a dietitian from Aston Medical School in Birmingham, told MailOnline that although the sandwiches will be on sale for more than a month in the run up to December 25, they should only be enjoyed ‘once or maybe twice’, like a Christmas dinner.

He advised people to look at what is in the sandwich — as those with multiple filling options ‘tend to add extra fat, salt and sugar’.

‘Some people might be surprised that up to six teaspoons of sugar can be in a Christmas sandwich,’ he said.

‘And just because it is plant-based doesn’t mean it is healthy as some of these can contain three-and-a-half teaspoons of sugar,’ Dr Mellor added.

Sheena Bhageerutty, assistant nutritionist at Action on Salt and Action on Sugar, told MailOnline: ‘As Christmas is fast approaching, festive food is filling the supermarket shelves.

‘During these festivities we often forget to take account of the high salt, sugar and calorie content in food, such as these festive sandwiches; especially when you consider that many children may be eating these products.

‘This reinforces the vital need for food manufacturers to be held accountable and are transparent with us so we can make informed healthier food options.’

Dr Linda Greenwall, a dentist and founder of the Dental Wellness Trust, told MailOnline: ‘These findings are staggering, especially given some of the sandwiches analysed most likely contain more calories, fat, sugar and salt than certain meals from fast food outlets.

‘What’s more, people may be surprised to learn that a sandwich filling can contain extortionate amount of sugars which is not only bad for our overall health but also our dental health.’