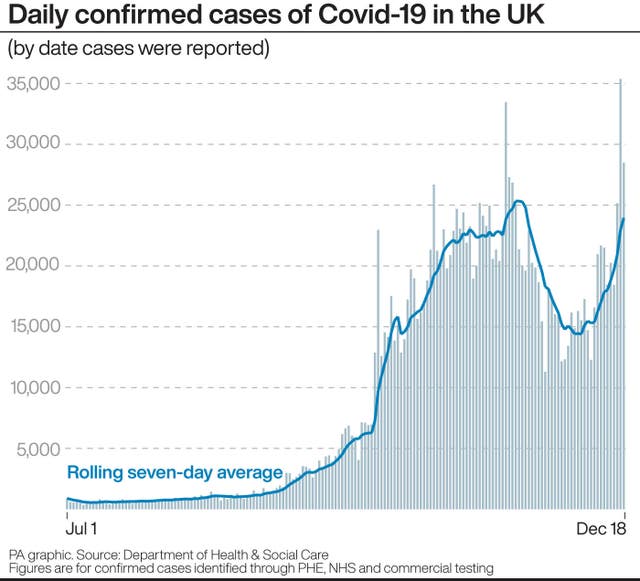 Boris Johnson has cancelled Christmas for millions of people across London and south-east England after scientists said that a new coronavirus variant is spreading more rapidly.

The Prime Minister announced that from Sunday areas in the South East currently in Tier 3 will be moved into a new Tier 4 – effectively returning to the lockdown rules of November.

Non-essential shops, gyms, cinemas, hairdressers and bowling alleys will be forced to close for two weeks – while people will be restricted to meeting one other person from another household in an outdoor public space.

The rest of England will also see the Christmas “bubble” policy – allowing up to three household to meet up over the holiday period – severely curtailed, applying on Christmas Day only.

Mr Johnson told a Downing Street news conference that he was making the changes with a “very heavy heart”.

He said: “I know how much emotion people invest in this time of year, and how important it is, for instance, for grandparents to see their grandchildren, for families to be together.

“So I know how disappointing this will be. But we have said throughout this pandemic that we must and we will be guided by the science.

“When the science changes, we must change our response.”

The Prime Minister was advised of the group’s conclusions at a meeting with ministers on Friday evening, and the new regulations were signed off by the Cabinet in a conference call on Saturday lunchtime.

The Cabinet Office minister Michael Gove has briefed the devolved administrations for Scotland, Wales and Northern Ireland on the group’s findings.

Under the new “stay at home” order – covering around a third of the population of England – people in Tier 4 will be told they should not stay away from home overnight and people from outside will be advised not to visit Tier 4 areas.

People throughout England are advised to “stay local” and avoid overseas travel, while those in Tier 4 will only be able to go abroad for essential business.

It will also apply in London (all 32 boroughs and the City of London) and the East of England – Bedford, Central Bedford, Milton Keynes, Luton, Peterborough, Hertfordshire and Essex (excluding Colchester, Uttlesford and Tendring).

Exemptions to the “stay at home” message which applied in the November lockdown, will also apply in the new Tier 4 – including support bubbles, childcare bubbles and children whose parents are separated.

People will be allowed to travel for education, childcare and to go to work if they cannot work from home and they will be permitted unlimited outdoor exercise.

Can’t go to the panto, or the Christmas market? These festive events are taking place online