China ‘under-representing’ true number of coronavirus deaths since it scrapped Zero-Covid, WHO says

The World Health Organization has criticised China for ‘under-representing’ the true number of coronavirus deaths since it scrapped its ‘zero-Covid’ policies.

In a rare rebuke of Beijing, the UN agency said on Wednesday China was using a ‘very narrow’ definition of Covid deaths, warning that official statistics were not showing the true impact of the massive on-going outbreak sweeping the country.

The comment came as the WHO prepares to meet with Chinese scientists again on Thursday as part of a wider briefing among member states on the global COVID-19 situation, amid concerns that the virus could spread further, and of new variants.

‘We believe that the current numbers being published from China under-represent the true impact of the disease in terms of hospital admissions, in terms of ICU admissions, and particularly in terms of deaths,’ the WHO’s emergencies director Michael Ryan told reporters. 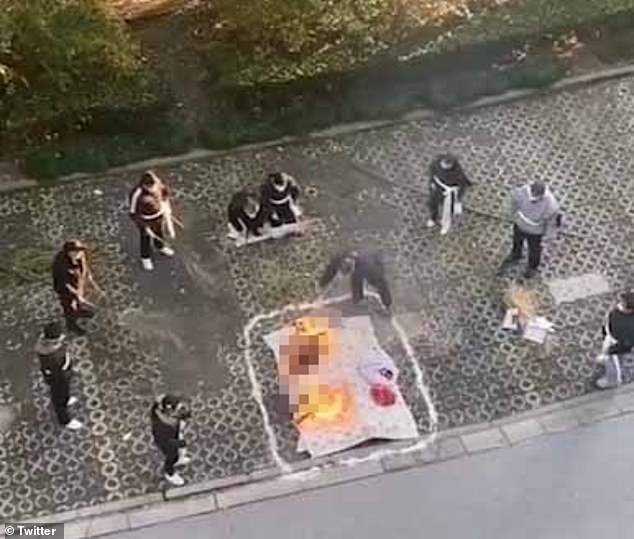 The World Health Organization has criticised China for ‘under-representing’ the true number of coronavirus deaths since it scrapped its ‘zero-Covid’ policies. Pictured: Chinese residents in Shanghai are purportedly seen burning a body in the streets as the country’s funeral services are overwhelmed by the massive outbreak of Covid infections after Beijing relaxed zero-Covid 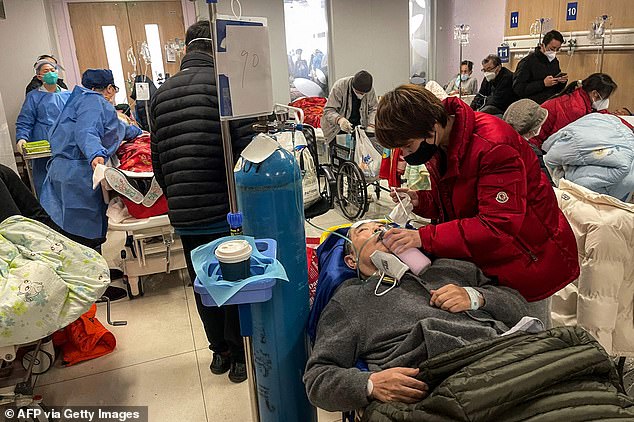 Pictured: A woman helps a patient at Tongren hospital in Shanghai on January 3, 2023. In a rare rebuke of Beijing, the WHO said China was using a ‘very narrow’ definition of Covid deaths on Wednesday, warning that official statistics were not showing the true impact of the virus

Earlier in the briefing, WHO Director-General Tedros Adhanom Ghebreyesus reiterated that the agency is ‘concerned’ about the surge in COVID-19 infections.

He also urged Beijing again to deliver rapid and regular data on hospitalisation and death there, reiterating concerns expressed by other countries.

‘We continue to ask China for more rapid, regular, reliable data on hospitalisations and deaths, as well as more comprehensive, real-time viral sequencing,’ he said at a media briefing.

‘WHO is concerned about the risk to life in China and has reiterated the importance of vaccination, including booster doses to protect against hospitalization, severe disease and death.’

Ghebreyesus has been criticised in the past for appearing reluctant to criticise Beijing, with the WHO previously being slammed as being too ‘China-centric’ during the pandemic and accused of failing to publicly challenge Chinese misinformation in early 2020.

However, earlier this year, he did criticise China’s draconian ‘zero-Covid’ policy in comments that drew anger from Beijing.

China has rejected blame for the pandemic, despite the virus first breaking out from the country in December 2019, from the city of Wuhan. Beijing has also been accused of obfuscating the WHO’s attempts to investigate the origins of Covid. 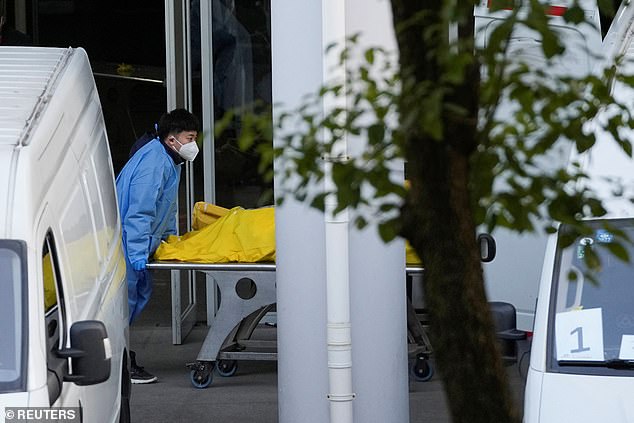 A staff member pushes a cart carrying a body bag at a funeral home, as Covid-19 outbreaks continue in Shanghai, China, January 4 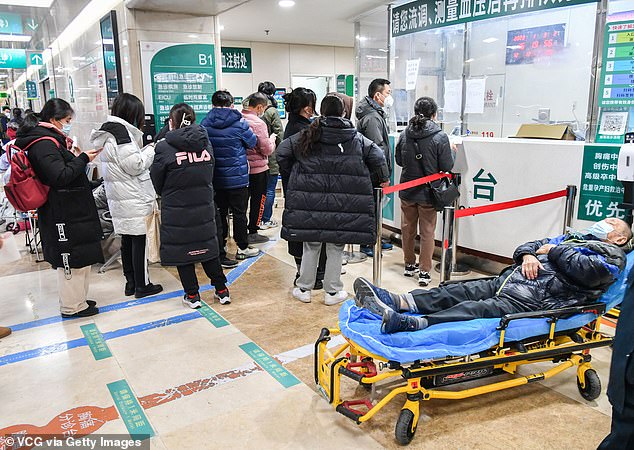 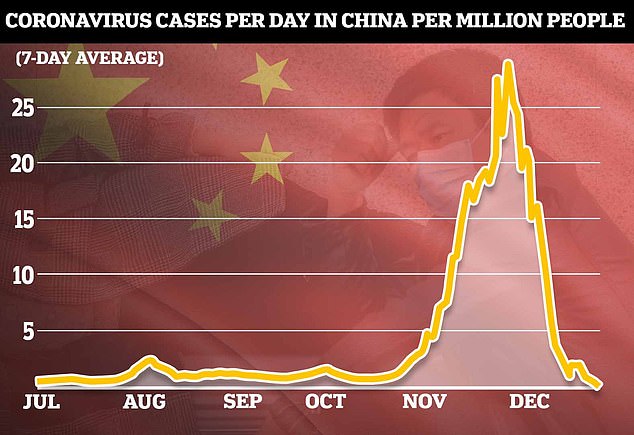 Pictured: A graph showing China’s average coronavirus cases per day, going off the official data released by the country. The figures are likely far higher than represented in this graph

The WHO did confirm on Wednesday that no new coronavirus variant had been found in China, easing some concerns about an outbreak that has spread rapidly there since Beijing abruptly reversed its ‘zero COVID’ policy.

The U.N. agency was releasing data provided by the Chinese Center For Disease Control and Prevention (CDC), a day after WHO officials met Chinese scientists amid global unease about the accuracy of China’s reporting of an outbreak that has filled hospitals and overwhelmed some funeral homes.

Footage has showed that funeral services are so overwhelmed, some have taken to burning the bodies of their relatives in the streets.

Beijing’s abrupt axing of ultra-strict COVID curbs last month has unleashed the virus on China’s 1.4 billion people, who have little immunity after being shielded since the virus emerged in the Chinese city of Wuhan three years ago.

China’s CDC analysis showed a predominance of Omicron lineages BA.5.2 and BF.7 among locally acquired infections, according to the data reported by the WHO.

Omicron is the dominant variant based on recent genomic sequencing, confirming what scientists had already said but which will allay concerns for now about a new variant emerging.

Health officials abroad have been struggling to work out the scale of the outbreak and how to stop it spreading, with more countries introducing measures such pre-departure COVID tests for arrivals from China, moves that Beijing has criticised.

European Union health officials were set to meet on Wednesday to discuss a coordinated response to it. 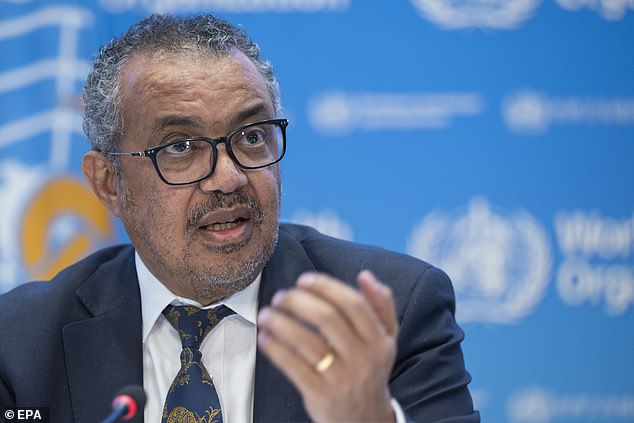 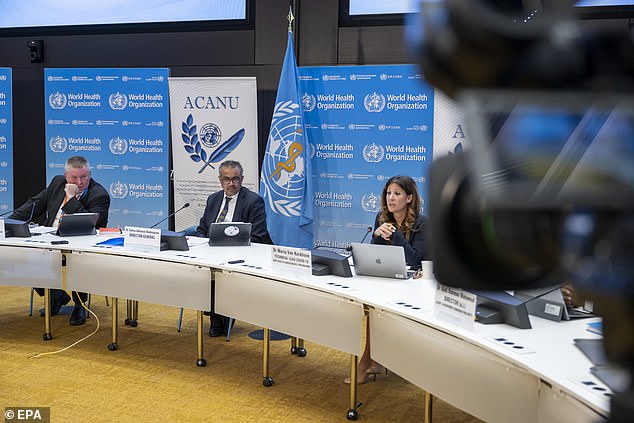 ‘We believe that the current numbers being published from China under-represent the true impact of the disease in terms of hospital admissions, in terms of ICU admissions, and particularly in terms of deaths,’ the WHO’s emergencies director Michael Ryan said (left)

Many Chinese funeral homes and hospitals say they are overwhelmed, and international health experts predict at least 1 million COVID-related deaths in China this year. China has reported five or fewer deaths a day since the policy U-turn.

‘That is totally ridiculous,’ a 66-year-old Zhang, a Beijing resident who only gave his last name, said of the official toll. ‘Four of my close relatives died. That’s only from one family. I hope the government will be honest with the people and the rest of the world about whatâs really happened here.’

Beijing has hit back against some countries demanding visitors from China show pre-departure COVID tests, saying the rules were unreasonable and lacked a scientific basis. Japan, the United States, Australia and several European states are among countries requiring such tests.

Willie Walsh, head of the world’s biggest airline association IATA, criticised such ‘knee-jerk’ measures that he said had not previously stopped the spread of a virus that had hammered airlines which are recovering from the pandemic. 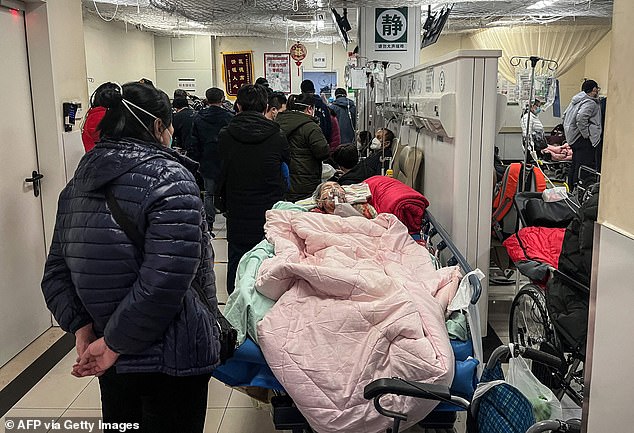 A patient is treated on a bed in a corridor of the emergency department of a hospital in Beijing on January 3, 2023 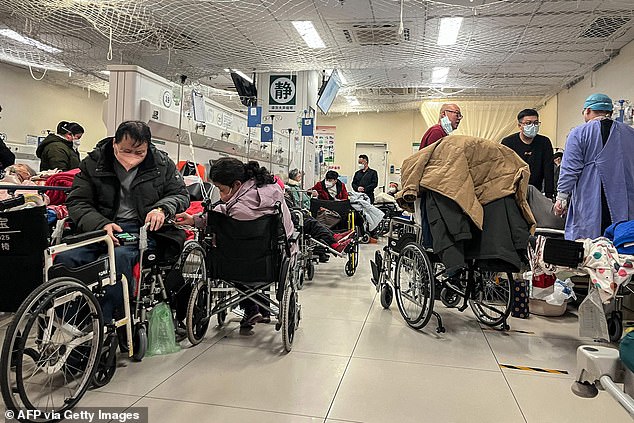 Patients are treated in the emergency department of a hospital in Beijing on January 3, 2023

China will stop requiring inbound travellers to quarantine from January 8 but they must be tested before arrival.

The same firm said as many as 2.1 million could die in China in the coming months.

Patients at Shanghai’s Zhongshan hospital, many of them elderly, were crammed in halls on Tuesday between makeshift beds with people on oxygen ventilators and intravenous drips.

China’s $17 trillion economy has grown at its slowest in nearly half a century amid the COVID disruptions.

But the yuan was at a four-month high against the dollar on Wednesday after Finance Minister Liu Kun promised to step up fiscal expansion. The central bank has also flagged support.