The number of Americans under the age of 20 with type 2 diabetes could skyrocket by as much as 700 percent by 2060, according to an official study.

Modelling funded by the Centers for Disease Control and Prevention (CDC) found rates of type 1 diabetes, the form that is most often seen in children, could also soar 65 percent within the next 40 years

The team did not offer an explanation for the dramatic surge, but one could be the expanding burden of childhood obesity in the US. The number of obese children has tripled over the past three decades.

People with diabetes are at risk of a host of health problems, including heart disease, chronic kidney disease, nerve damage, and other problems with feet, oral health, vision, hearing, and mental health. 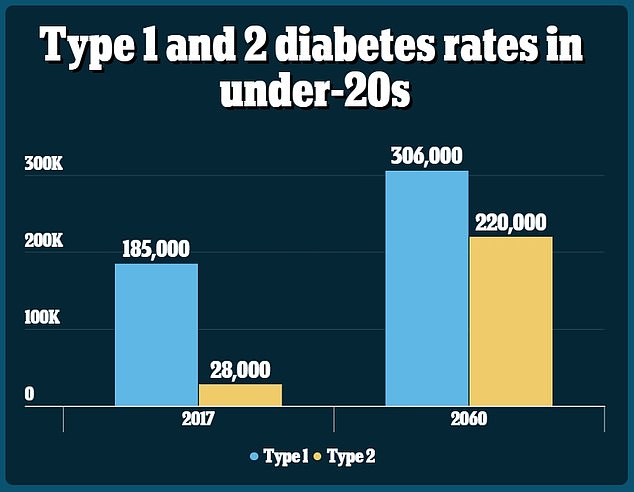 If an expected upward trend in new diabetes diagnoses comes to fruition, the US could see a nearly 700 percent increase in type 2 diabetes cases in people younger than 20

CDC Acting Principal Deputy Director Dr Debra Houry said: ‘This new research should serve as a wake-up call for all of us.

‘It’s vital that we focus our efforts to ensure all Americans, especially our young people, are the healthiest they can be.’

The researchers from Germany and the US found that if incidence rates from 2017 were to remain unchanged over the coming decades, the number of young people with either type of diabetes would rise 12 percent from 213,000 to 239,000.

Type 1 diabetes – which is genetic and shows up early in life – is more common in young people in the US, but type 2 – which is linked to obesity and lack of exercise – has increased significantly in children in the past two decades, the researchers said.

They concluded that if the trend remains constant and doesn’t spike unexpectedly, Americans can expect to see Type 2 diabetes cases increase nearly 70 percent and Type 1 cases to rise three percent by 2060.

The number of young people with type 1 diabetes could increase by as much as 65 percent in the next 40 years.

Obesity and a poor, high-sugar diet, are two of the biggest risk factors for type 2 diabetes.

Figures show that one out of five children under the age of 19 is obese, and one in three is overweight.

Forecasters also believe the presence of diabetes in people of childbearing age might be another important factor, because maternal diabetes increases risk of diabetes in children.

The obesity crisis only worsened during the Covid pandemic. A 2021 study published in the journal BMJ reported that the percentage of obese children and teens increased to 22 percent between March and November 2020, compared with 19 percent before the pandemic.

Before the pandemic, children at a healthy weight were gaining an average of 3.4 pounds annually. According to the study, that annual rate rose to 5.4 pounds during the pandemic.

For severely obese children, the expected annual weight gain increased from 8.8 pounds before the pandemic to 14.6 pounds in August 2020.

‘This study’s startling projections of type 2 diabetes increases show why it is crucial to advance health equity and reduce the widespread disparities that already take a toll on people’s health.’

Nearly 1.5 million Americans are living with type 1 diabetes, a disease caused by a lack of insulin, and roughly 64,000 new diagnoses are made each year.

It is a lifelong disease that affects about one in 400 children, adolescents, and young adults under 20.

Meanwhile, type 2 diabetes affects far more people, the majority of whom are adults. Type 2 accounts for more than 90 percent of diabetes cases.

The model was published in the journal Diabetes Care on Thursday.

Type 2 diabetes is a common condition that causes the level of sugar (glucose) in the blood to become too high.

It can cause symptoms like excessive thirst, needing to pee a lot and tiredness. It can also increase your risk of getting serious problems with your eyes, heart and nerves.

It’s a lifelong condition that can affect your everyday life. You may need to change your diet, take medicines and have regular check-ups.

It’s caused by problems with a chemical in the body (hormone) called insulin. It’s often linked to being overweight or inactive, or having a family history of type 2 diabetes.

Gucci & Paris Fashion Week: How my dyslexia made me an artist