A patients’ rights group has warned a nursing strike in New York City could cause potentially-fatal medical errors.

More than 7,000 nurses at two major hospitals in Manhattan and the Bronx hit the picket line today over pay and staff shortages.

The move forced the Mount Sinai and Montefiore hospitals to cancel surgeries and shift critically ill individuals — including 13 fragile newborns — to other units.

Caitlin Donovan, a senior director at the National Patient Advocacy Foundation, warned there would likely be more ‘medical errors’ due to the strike. She added that it was ‘never ideal’ to move critically ill patients, because of the strain it placed on the body.

One chronically ill woman — Sierra Romero, 25 — had surgery to remove a painful abscess in her abdomen canceled just 30 minutes before it was due to take place at Mount Sinai hospital. 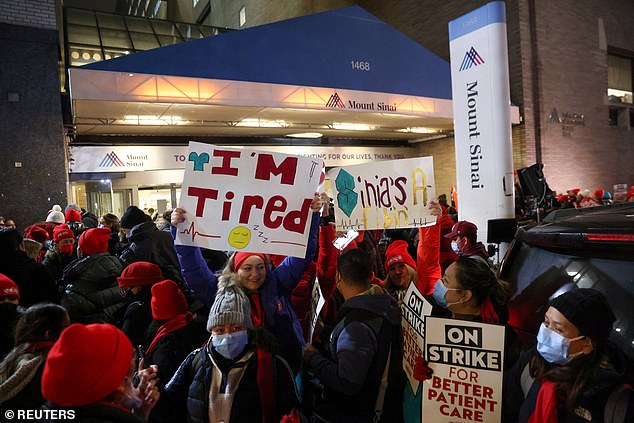 Thousands of nurses have taken to the picket line in protest over pay and staffing shortages at Mount Sinai Medical Center on Manhattan and Montefiore Medical Center in the Bronx. Pictured: Nurses protesting early this morning outside Mount Sinai 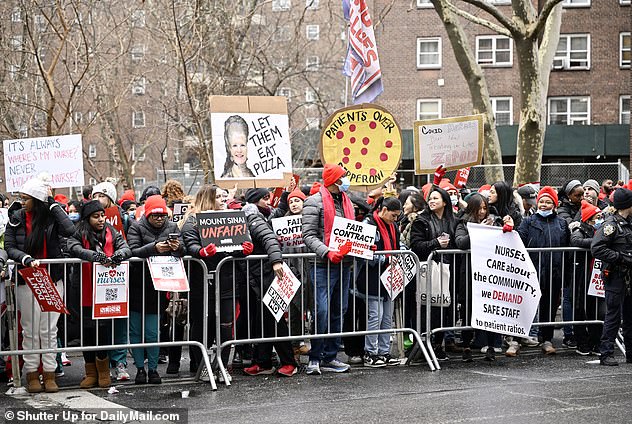 Thousands of nurses went on strike today and joined the picket line in New York City. One was pictured clutching a pizza that read ‘patients over pepperoni’ while another had a picture of Marie Antoinette with the phrase ‘let them eat pizza’. The pizzas reference parties thrown for nurses when they complain about too much work

Ms Romero told DailyMail.com: ‘I was told to keep preparing just in case. I got a call from my doctor last night, and he said no food or drink after midnight just in case we are able to do the surgery.

‘But he called again at 6.30am and he said, “So sorry, we can’t do it. We will talk to you as soon as we have nurses and we can reschedule”.

‘They are not even able to reschedule because they don’t even know what nursing will look like next week. My surgery was scheduled for 7am today!’

Ms Romero has crohn’s disease, a chronic condition which means her bowel is inflamed and tissue is swollen in her digestive tract.

By delaying her surgery, she said it had raised concerns that her abscess could become infected which would make treatment more complicated. 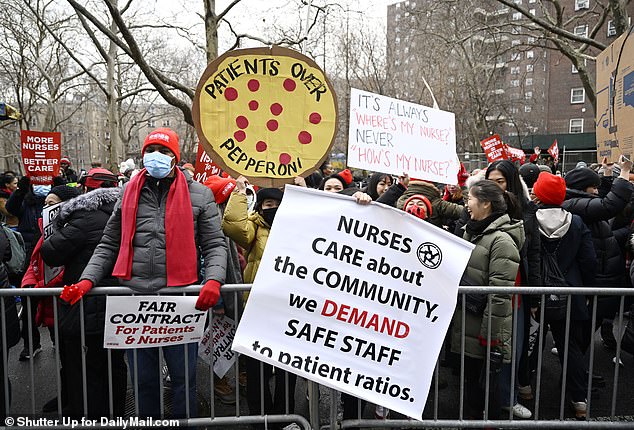 Pizza-themed protest signs were aplenty at the Monday morning protest, referencing the pizza parties thrown for nurses when they complain too much at work 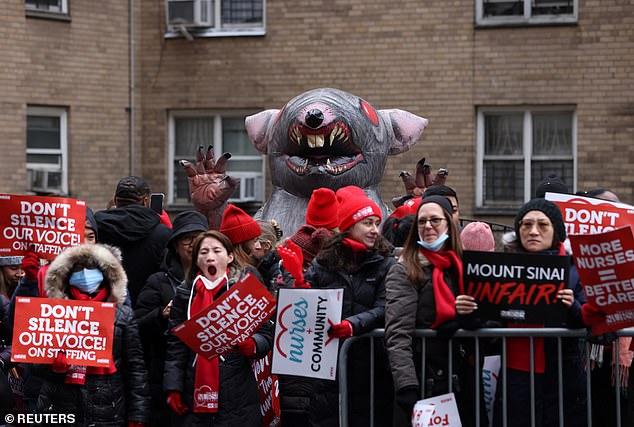 Ms Donovan said more patients could suffer disruption to their care, if the strikes are not ‘resolved as quickly as possible’.

‘We already know vulnerable patients including cancer patients and babies had to be moved from one hospital to another, and that is never ideal,’ she said.

‘Moving them subjects them to exposure to germs raising the risk of an infection. It can also stress the body itself.’

Patient, 25: Surgery canceled half-an-hour before it was due

A Mount Sinai patient had her surgery canceled just 30 minutes before it was due to take place this morning.

Sierra Romero, 25, was scheduled to have an abscess in her colon drained and polyps removed during an operation at 7am this morning.

But after the strike went ahead doctors called to cancel the procedure, saying they could not reschedule it because they ‘don’t even know what nurses they will have next week’. 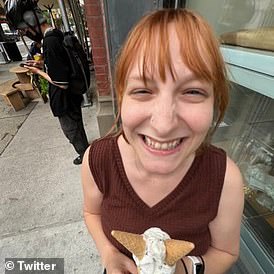 Sierra Romero, 25. had her colon surgery at Mount Sinai canceled 30 minutes before it was due to take place

Ms Romero suffers from Crohn’s disease, an inflammatory bowel disease that causes swelling of the tissue in your digestive tract.

It leaves her doubled with pain every day that feels like ‘glass shards’ are inside her.

She told DailyMail.com: ‘I got the date for the operation about two months ago, after being diagnosed two years ago.

‘I got a call last night from my doctor to say no food or drink after midnight just in case they are able to do the surgery.

‘He called at 6.30am today to say “so sorry, we can’t do it. We will talk to you as soon as we have nurses and we can reschedule”.

‘I am really upset by this, because I really need this surgery.

‘But I stand with the nurses, I think they are being really restricted.

‘I have been hospitalized many times and my nurses don’t have time for me.’

She added: ‘Mount Sinai has a lot of money, they just don’t want to give it to the nurses.’

She added: ‘We also have very high rates of medical errors in the US causing about 100,000 deaths a year.

‘[This could rise] as new nurses coming in might not be as familiar with the patients themselves, and wards might be very short staffed.

‘We worry about this for patients. We just hope that the strike is resolved as quickly as possible.’

More and more nurses have been going on strike across the US in recent years as their employment contracts expire, citing disputes over pay and working conditions.

To head off the strikes in New York, hospital executives had offered a 19.1 percent pay rise over three years as well as $51,000 in cash compensation and $19,500 in medical payment benefits.

Bosses also promised to hire more nurses, including another 170 at Montefiore alone.

But nurses rejected the proposals in talks that went down to the wire last night, and took to the picket lines today.

Neither side appears ready to return to the negotiating table at present.

The New York City Nurses Association released a statement last night where it accused hospital executives of ‘creating this crisis by failing to hire, train and retrain nurses while at the same time treating themselves to extravagant compensation packages’.

Mount Sinai hospitals, on the other hand, reportedly handed fliers to those at the picket lines this morning accusing nurses of ‘reckless behavior’ and abandoning patients at their bedsides.

In the days before the strike, medics started moving critically ill patients to other units that would not be affected by the action.

They also discharged all the patients for whom it was safe to do so.

From today doctors have also begun canceling surgeries, and telling patients these will be rescheduled.

Cancer and heart patients are affected by the cancellations, with some being sent to other hospitals for treatment.

Nurses who took to the picket lines this morning brandished signs saying nurses ‘care about the community’ and ‘we demand safe staff to patient ratios’.

Some protesters also wielded a sign saying ‘patients over pepperoni’, and a picture of the French Queen Marie Antoinette with the phrase ‘let them eat Pizza’, in reference to pizza parties thrown for staff when they complain over working conditions. One nurse also dressed as a rat.

Hospitals in New York City were already under strain because of the ‘tripledemic’ of Covid, flu and RSV, which had seen mounting patient numbers in their hospitals.

There are also concerns over the ‘kraken’ variant XBB.1.5, of Covid, with New York City being one of the emerging hotspots.

Another patient affected by the strikes at Montefiore hospital also urged officials to get back around the negotiating table on twitter.

She wrote: ‘I was asked to go to my appointment today that I have waited over four months for.

‘It first got rescheduled for a telephone visit, and just got canceled this morning.

‘Hire more nurses! They are overworked and have been working nonstop, especially through Covid and now our “tripledemic”.’

New York State’s Governor Kathy Hochul and the mayor Eric Adams have called on both sides to resolve the strike.